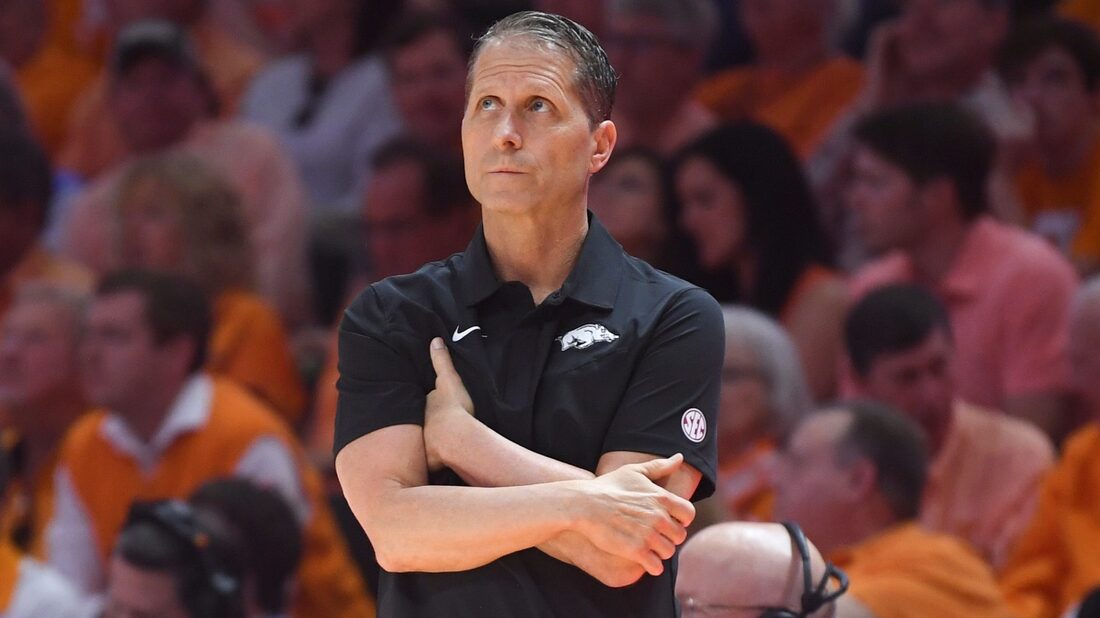 LSU and #15 Arkansas are headed to the NCAA Tournament.

First, the fifth-seeded Tigers and the fourth-seeded Razorbacks have their sights set on this week and chasing down the SEC tournament title as they meet in the quarterfinals Friday afternoon in Tampa.

A deep run in the conference tournament could boost the NCAA seeding for teams meeting for a third time this season. The Razorbacks won both regular-season meetings — 65-58 on Jan. 15 in Baton Rouge, La., and 77-76 on March 2 in Fayetteville, Ark.

“As long as they’re going to keep a scoreboard up there, and we’re not out there just hooping, then as a competitor you want to go win,” Razorbacks coach Eric Musselman said of the tournament. “I promise you there will be one thing on my mind Friday, and that’s, ‘How do we win the freaking game?'”

The second victory over the Tigers was Arkansas’ last win. The Razorbacks lost at #9 Tennessee 78-74 in the regular-season finale last Saturday.

“We still feel like we’ve got something to prove,” said guard JD Notae, the second-leading scorer in the SEC (18.9 points per game). “We want to win the SEC tournament. That’s a big-time challenge for us to prove ourselves again.”

Arkansas lost its first three SEC games, but won 14 of its last 16 games overall. Its last four weeks included victories against the three SEC teams seeded ahead of it — Auburn, Kentucky and Tennessee.

“We put ourselves in a position where we had to play as good as anybody in the country with the way the schedule laid out,” Musselman said.

It’s unclear if the Razorbacks will have wing Au’Diese Toney available. He scored 18 points in the last game against LSU before injuring an ankle that kept him out of the game against Tennessee. Toney is the team’s #4 scorer (10.4) and #2 rebounder (5.3).

LSU’s victory over Missouri wasn’t as competitive as the final score suggests. LSU used a suffocating defense to lead by as many as 25 points in the first half.

“We got off to a good start,” Tigers coach Will Wade said. “Any time you can win in the tournament it’s a positive. Obviously, we had some major lapses in the second half, but I thought Missouri played extremely, extremely well.”

“The first game (in the tournament) is the hardest game,” said SEC Sixth Man of the Year Tari Eason, who led LSU with 19 points. “But the first game is always good at the same time because it helps you build momentum, and that’s something that we definitely need gearing up going into the rest of this tournament.”