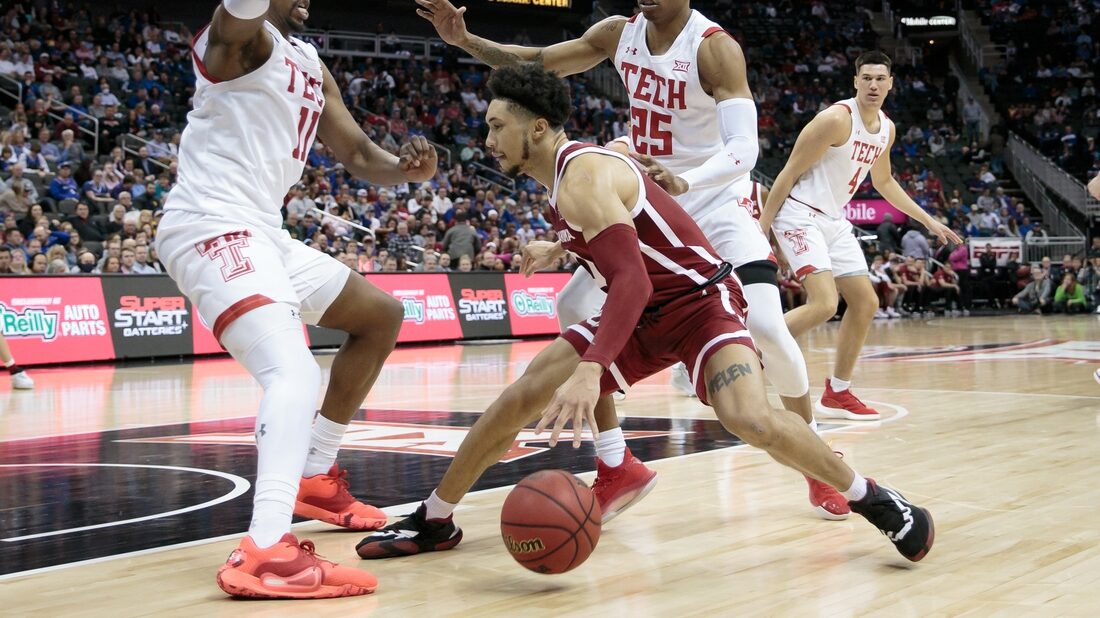 Clarence Nadolny hit two free throws — his only two points of the game — with 53.9 seconds left, as #14 Texas Tech defeated Oklahoma 56-55 Friday night in the second semifinal of the Big 12 Championship.

After Nadolny’s free throws, Umoja Gibson missed a contested layup and Tech’s Kevin McCullar was fouled with 29 seconds left. He missed the front end of a one-and-one and OU got the rebound.

Jalen Hill drove to the basket but missed. But Jacob Groves was fouled on the rebound. Groves hit the front end but missed the second, and the ball bounced into the backcourt. Gibson retrieved it and raced back for a layup attempt that was blocked.

Texas Tech (25-8) was led by Kevin Obanor and Davion Warren with 11 points each.

Texas Tech seemed to have the game firmly in its grasp, leading 44-33 five minutes into the second half. The 11-point halftime lead was only momentarily cut to single digits.

But much like they did in knocking off #3 Baylor Thursday night in the quarterfinals, the Sooners responded. Oklahoma used a 14-0 run, though it took more than seven minutes, early in the second half to turn that 11-point deficit into a three-point lead. Tech went 7:42 without scoring, missing eight straight shots.

But the one Tech bucket led to a 6-0 spurt helping the Red Raiders regain the lead. Oklahoma scored the next five points. The teams traded baskets until 2:30 remained. Hill missed the front end of a one-and-one with 2:17 left, but Oklahoma got the rebound.

Texas Tech led nearly the whole first half, by as many as eight points on several occasions, but they had trouble putting away the Sooners. The Sooners relied on Hill and Gibson, who combined for 15 of Oklahoma’s first 20 points.

But when Obanor hit his second 3-pointer and Adonis Arms followed with a spinning layup, Tech led 33-22. The Red Raiders maintained their 11-point margin heading into halftime, 37-26.

Williams led the Red Raiders with nine points at halftime, while Hill led all scorers with 11 points for the Sooners.