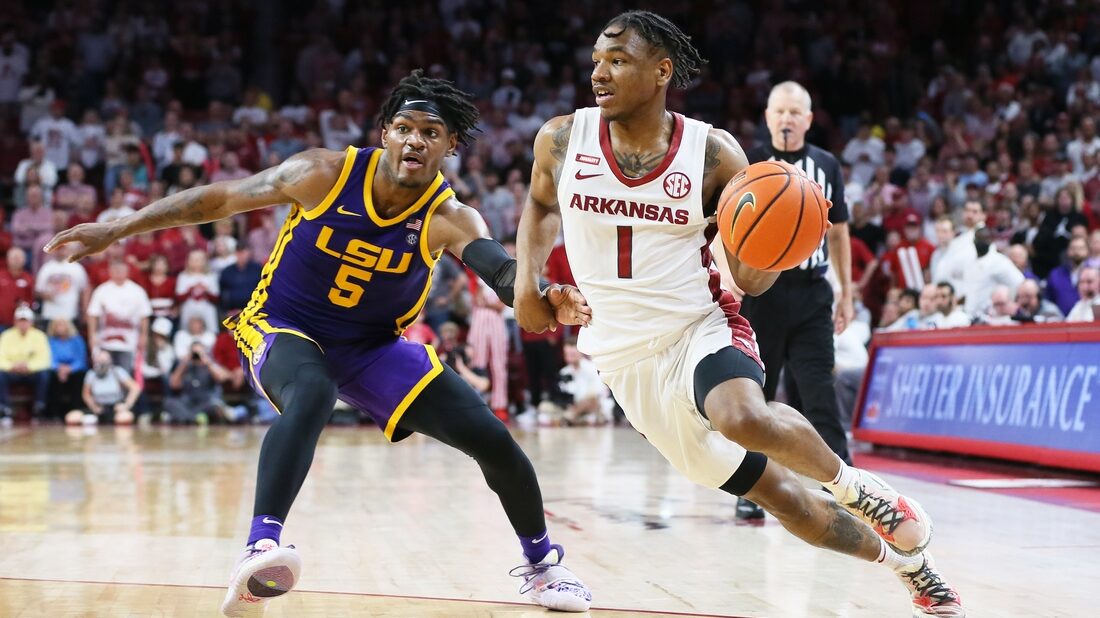 Arkansas and Tennessee each own a chance to claim a share of the Southeastern Conference regular-season title on Saturday but will require some help.

#7 Kentucky (13-4 SEC) also has a chance to claim part of the crown. The Wildcats visit Florida on Saturday.

But the first order of business to Arkansas coach Eric Musselman is finishing a two-game regular-season sweep of Tennessee.

The Razorbacks smothered the Volunteers’ offense on Feb. 19 with a 58-48 home victory. The point total and field-goal percentage of 27.1 mark Tennessee’s worst showing of the season in both categories.

Jaylin Williams recorded 13 points and a career-high 16 rebounds for Arkansas in the victory.

Williams had another strong outing on Wednesday when he collected 19 points and 10 rebounds during a 77-76 home win over LSU. It was his seventh straight double-double and 12th of the season.

“He set the tone for us, going inside and hitting a couple jumpers,” Arkansas’ Stanley Umude said afterward. “Whenever he’s playing like that on the offensive side, we’re basically unstoppable.”

Umude scored 23 points as the Razorbacks recorded their fifth straight win and 14th in the last 15 games.

The lone blemish in nearly two months was a 68-67 road loss to Alabama when Arkansas’ rally from a 13-point deficit fell short.

“For 15 games, even at Alabama, the game that we didn’t win, we fought back,” Musselman said. “I just think it’s a team right now that has belief, finds a way and is able to adjust.”

Tennessee has rebounded from the loss to Arkansas with three consecutive victories — one being a solid 67-62 home win over Auburn on Feb. 26.

The Volunteers weren’t as impressive on Tuesday night at lowly Georgia but did pull out a 75-68 road victory.

“Overall, to come in and get a win that we desperately needed after a big win at home (was good),” Barnes said afterward. “Now we have one more final game at home. We’re going to have to play a whole lot better, we know that. And we’ll see if we can do it.”

Tennessee is 15-0 at home this season so gaining a split with Arkansas surely is attainable.

The odds will be made easier if Josiah-Jordan James can follow up his career-best outing against Georgia. James collected a career-high 23 points, eight rebounds and season-high five assists. He also drained three 3-pointers to go along with two steals and two blocked shots.

“You could tell he got in that groove where his mid-range game opened up,” Barnes said. “He had a couple looks from the 3-point line. We were getting down the floor pretty quick in transition and sometimes over-dribbling the ball and turning the ball over when we didn’t need to.

“Josiah, not only did he score the ball well, but he rebounded the ball well, had a couple blocks. His minutes at that point in time (in the second half) was the reason we were able to stretch it out.”

Kennedy Chandler (13.6) and Santiago Vescovi (13.5) are Tennessee’s two top scorers. JD Notae leads the Razorbacks at 18.8, which ranks second in the SEC.

The recent win was Arkansas’ eighth in the past 12 matchups with the Volunteers.