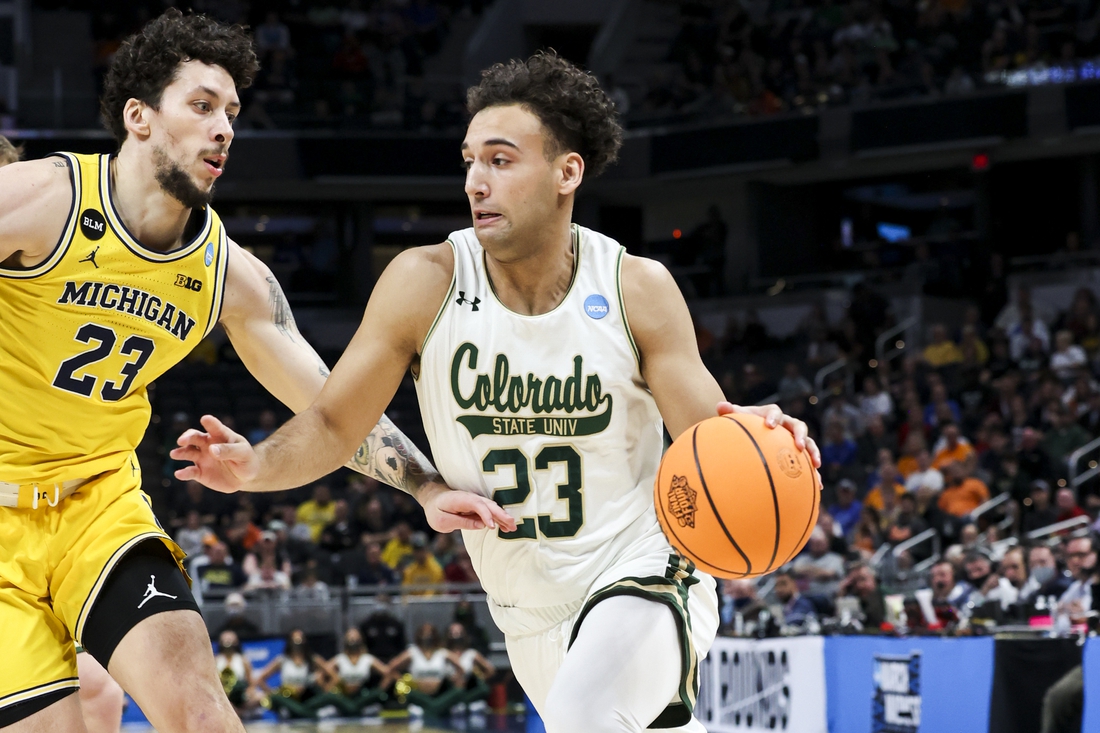 Hunter Dickinson scored 21 points and Michigan outran Colorado State 75-63 in the first round of the NCAA Tournament at Indianapolis on Thursday.

South Region #6 seed Colorado State (25-6) controlled the first half but ran out of magic against the bigger, more physical Wolverines (18-14), the #11 seed.

Colorado State’s Dischon Thomas had a team-high 15 points and David Roddy, the player of the year in the Mountain West, was held to 13 points, limited largely to a face-up game against the 7-foot-1 Dickinson.

“Our guys really stuck in it mentally,” Michigan coach Juwan Howard said. “I think that was a true test for us.”

Kendle Moore took a full-speed handoff for a layup to trim Michigan’s lead to 68-60 but Eli Brooks made a 17-footer that hushed the drama at Gainbridge Fieldhouse and salted the game away with free throws in the final minute.

Michigan faces the winner of the second game of the day in Indianapolis — third-seeded Tennessee and #14 Longwood — in the second round Saturday.

A pair of free throws by Dickinson moved the score to 66-58 Wolverines. Dickinson had only one prior shot attempt in the second half when he converted a three-point play to stretch Michigan’s lead to 60-54 with 6:16 remaining.

Up until Michigan took the lead 45-44, Colorado State had kept the Wolverines at bay. The rally continued as Caleb Houstan’s corner 3 bumped Michigan back on top, 50-49, and he nailed another from the right wing to put Michigan on top 53-49.

Size was on Michigan’s side, and the edge became evident with Dickinson swatting three shots early to push Colorado State to the perimeter. Lining the 3-point arc quickly became the Rams’ comfort zone, but the Rams lost their legs in the second half.

“I thought the game was in the balance, and we had our chances,” Colorado State coach Niko Medved said of the final eight minutes of the game. “We’ve been good in the paint all year and obviously we weren’t able to do that.”

Thomas, the Rams’ tallest starter at 6-8, slid outside in a spread attack and his quick, angled trigger caught Michigan defenders on their heels. He drained 4 of 5 attempts from 3-point range in the first half but managed only three points in the second.

Dickinson scored at will on the right block with 12 points on 5-of-7 shooting in the first half, but Michigan struggled to find him until the late stages of the second half.

“I was thinking, ‘Shoot, if they can do it to us, we can do it to them,'” Dickinson said of the methodical climb out of a 15-point hole.

A scoreless seven-minute, 10-second dry spell was the lowlight in the first half.

The early hole for Michigan was a byproduct of bricks from the outside, turnovers and giving Thomas space to show off his quick, if unorthodox, release from 3-point range.

The Wolverines missed all seven 3-pointers they attempted and committed nine turnovers in the first half to trail 36-29 at the break.