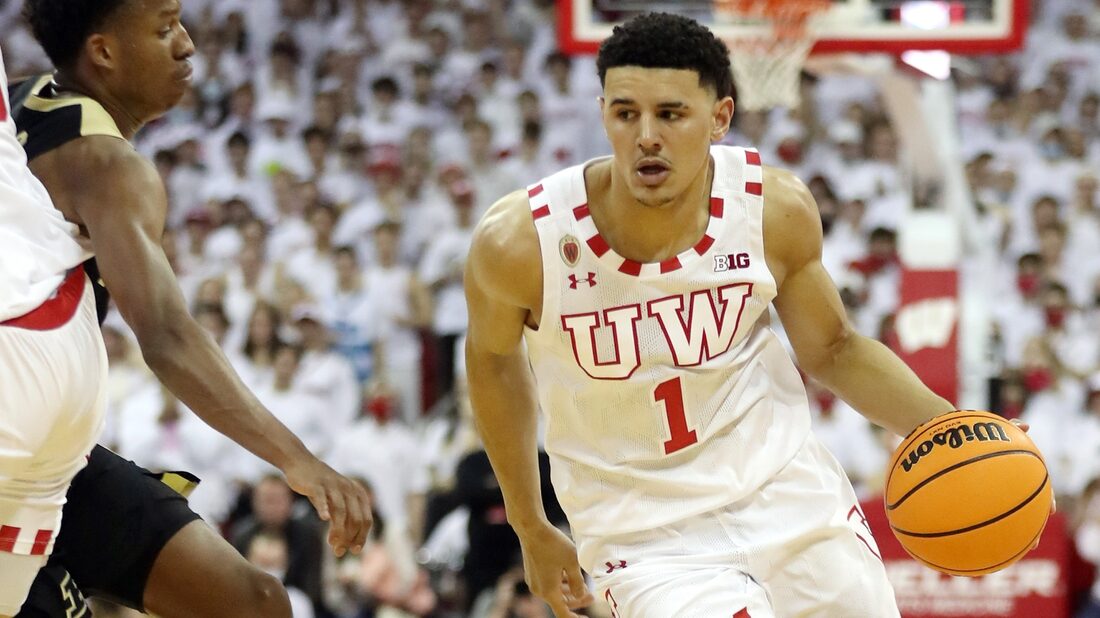 #10 Wisconsin will look to close the regular season with its sixth straight win when it hosts Nebraska on Sunday afternoon in Madison, Wis.

A Wisconsin win or an Illinois loss later on Sunday will ensure the Badgers have the #1 seed in next week’s Big Ten Tournament.

The Badgers (24-5, 15-4 Big Ten) have been firing on all cylinders, winning their last five games and seven of their last eight. Their most recent victory, a thrilling 70-67 win over #8 Purdue on Tuesday night, allowed them to clinch at least a share of Big Ten regular-season title.

After Jaden Ivey hit a 3-pointer to tie the game at 67-67, Chucky Hepburn banked a 3-pointer off the glass with 1.2 seconds remaining to sweep the season series against the Boilermakers.

“He’s had a moxie and a calmness to him the whole year. He plays beyond his age so to speak,” Wisconsin head coach Greg Gard said of Hepburn. “I think the confidence that has grown over the year, specifically on the offensive side, has been the difference for him.”

Tyler Wahl led the Badgers with 19 points on 8-of-14 shooting and five steals. Hepburn supplied 17 points, and Johnny Davis added 16 to go along with eight rebounds.

Davis has been incredible all season, scoring in double figures in 26 of his 27 games played. He currently ranks third in the conference with 20.3 points per game.

Lorne Bowman II is questionable for Saturday’s matchup with a non-COVID illness that has sidelined him for the past four games. The 6-foot-2 freshman has appeared in 22 games this season and is averaging three points and 1.1 rebounds per game.

Following a four-game losing streak, Nebraska (9-21, 3-16) has won back-to-back games after pulling off a 78-70 road upset of #23 Ohio State on Tuesday night. It was head coach Fred Hoiberg’s first win against a top-25 opponent.

The Cornhuskers were impressive following halftime, maintaining a lead for the entirety of the second half.

“The guys (went) out and (executed) it, (locked) into it,” Hoiberg said on his postgame radio show. “It just speaks to how much they’re bought into this thing, and that’s not the case with most teams that are struggling.”

Bryce McGowens finished with a team-high 26 points on 8-of-15 shooting. Alonzo Verge Jr. contributed 13 points and 11 assists to record his fifth double-double of the season, and reserve C.J. Wilcher had 15 points.

Although Nebraska has shot just 32.3 percent from 3-point range on the season, the Cornhuskers shot at least 39 percent from deep in each of the last three games.

The Huskers had struggled from beyond the arc in the three games prior, though, shooting under 30 percent in losses against Northwestern, Maryland and Iowa.

Sunday marks the second meeting between Wisconsin and the Cornhuskers. The Badgers will be looking to sweep Nebraska after earning a 73-65 win back on Jan. 27 behind 21 points from Brad Davison.