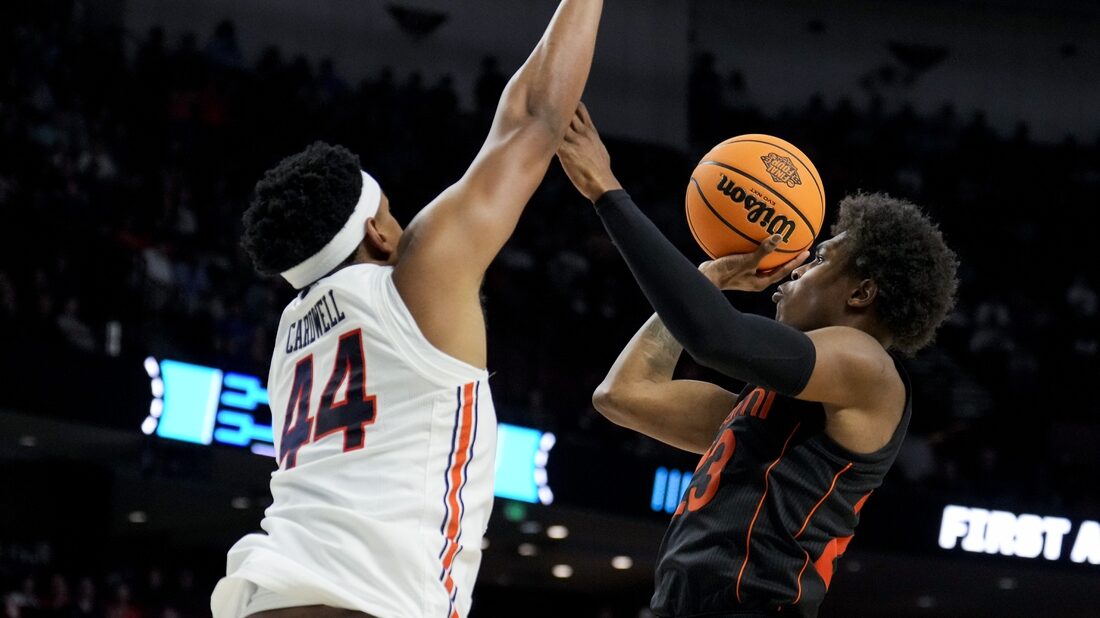 Isaiah Wong’s 21 points and Kameron McGusty’s 20 points propelled Miami past Auburn for a 79-61 victory in the NCAA Tournament’s second round Sunday night at Greenville, S.C.

Charlie Moore had 15 points and Jordan Miller added 12 points for the Hurricanes in the Midwest Region game.

#10 seed Miami (25-10) takes on 11th-seeded Iowa State in the Sweet 16 on Friday night in Chicago. The Hurricanes have won nine times in their last 12 games.

“We’re going to Chicago,” Moore said. “I’m excited we got the win. Auburn played hard. It was a hard-fought game. We just play together.”

Jaylin Williams and K.D. Johnson both tallied 12 points for second-seeded Auburn (28-6). Wendell Green Jr. had 11 points and Jabari Smith notched 10 points on 3-of-16 shooting. Smith had 15 rebounds that helped the Tiger to a 47-39 edge on the boards.

Moore chipped in nine rebounds, eight assists and three steals to go with his 15 points.

“With this guy quarterbacking us … he is, for us, our Chris Paul,” said Miami coach Jim Larranaga.

Auburn made just 5 of 26 attempts from 3-point range in a disappointing conclusion for a team that once held the country’s #1 ranking earlier this season.

Miami was just 3 for 15 on 3-pointers, but the Hurricanes were charged with just four turnovers.

The Hurricanes surged to a 53-43 lead, capped by Wong’s three-point play with 12:03 to play. The gap grew to 60-47 following Sam Waardenburg’s 3-pointer and McGusty’s layup.

By then, Miami was controlling the game in most ways, with points off turnovers, in-the-paint scoring and fast-break points all significantly favoring the Hurricanes. The only category that tilted in Auburn’s favor was at 28-4 edge in bench scoring.

Forward Walker Kessler of the Tigers was limited to two points. He didn’t make any of his six shots from the field.

The Hurricanes became the third team from the Atlantic Coast Conference to reach the Sweet 16, following North Carolina and Duke earlier this weekend.