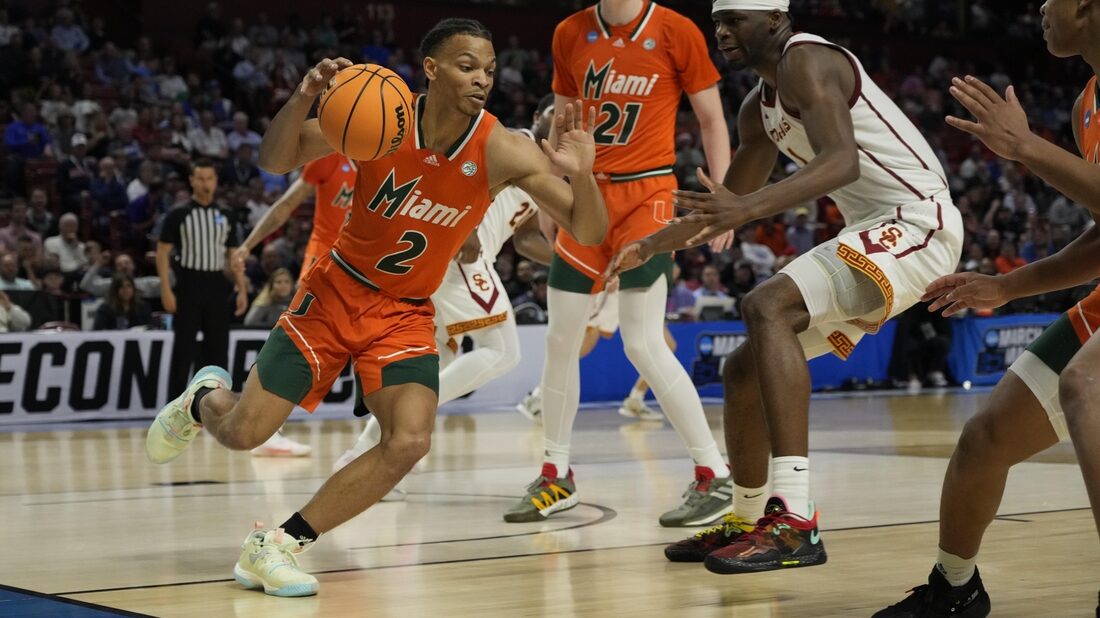 Charlie Moore connected on two free throws with 3 seconds left as Miami withstood a late-game rally from Southern California to win 68-66 in the NCAA Tournament’s first round Friday afternoon at Greenville, S.C.

Isaiah Wong scored 22 points before fouling out and his Miami teammates finished the job. Moore had 16 points and Kameron McGusty provided 12 points for Miami.

“They were a little bigger than us and we played through it,” Wong said in a postgame interview. “We played a big game today.”

Miami (24-10) will meet second-seeded Auburn, an 80-61 winner against Jacksonville State in the site’s first game, Sunday in the second round of the Midwest Region.

Wong fouled out with 2:07 left and the Hurricanes up by one. McGusty made two free throws for the game’s next points and added a jumper on the next Miami possession.

The lead moved to 65-58 on two free throws by Bensley Joseph.

But Peterson hit consecutive 3-pointers sandwiched around a Miami turnover to close the gap to 65-64 with 25 seconds left as Miami used the last timeout available to either team.

Miami’s Sam Waardenburg made the second of a two-shot free-throw opportunity. Peterson tied the game from a shot in the lane with 13 seconds left before Moore hit the winning shots.

The Hurricanes snatched their first victory in an NCAA Tournament game in six years.

Miami, which has won four of its last five games, led by as many as 13 points in the first half before settling for a 31-20 halftime edge. This margin came despite the Hurricanes going 0 for 8 on 3-point attempts.

USC had its fewest points in any half this season.

Wong had the first 13 points for the Hurricanes — he shot 5 for 7 and the rest of the team was a combined 0 for 7.

USC struggled on offense, scoring only four points in the first eight minutes. That got the Trojans into a 10-4 hole. They then went up 14-13 before another offensive lull.

This time, the Trojans managed just two points across a seven-minute period. They ended up shooting 29.6 percent (8 for 27) in the first half to go with 12 turnovers. Waardenburg blocked four shots USC shots in the half.