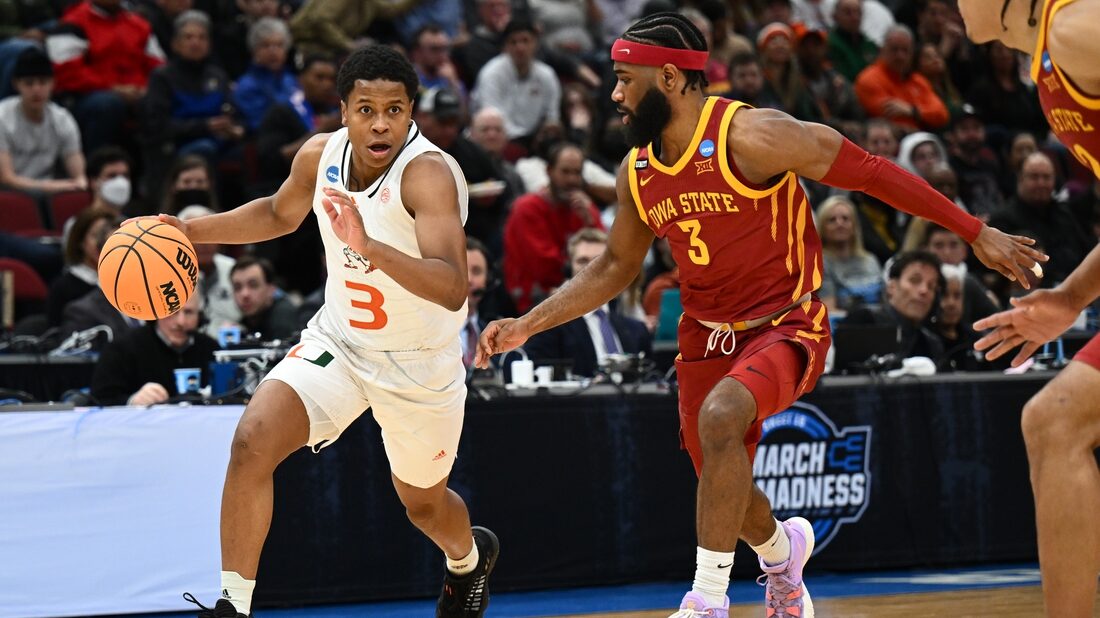 CHICAGO — Miami’s Kameron McGusty has absorbed his share of weather-related puns, especially while playing for a team nicknamed the Hurricanes.

Until Friday, however, neither McGusty nor any Miami player had heard this: The Hurricanes are Elite Eight-bound.

McGusty scored 27 points to lift 10th-seeded Miami to a 70-56 win over 11th-seeded Iowa State in an NCAA Tournament Midwest Region semifinal on Friday.

Miami (26-10) advances to the first Elite Eight in program history after winning for the sixth time in the past seven games. The Hurricanes will face top-seeded Kansas in the regional final on Sunday, with a trip to the Final Four on the line.

“It’s just amazing to be here. I love these guys. We’ve created a bond that can never be broken. And I’m just proud that we were able to pull it off,” McGusty added.

Jordan Miller had 16 points and Sam Waardenburg added 13 points, eight rebounds, five assists and three blocks for the Hurricanes, who finished in fourth place in the Atlantic Coast Conference, which boasts three schools in the Elite Eight.

A remarkable turnaround run concluded for first-year coach T.J. Otzelberger and the Cyclones (22-13). After finishing 2-22 last season, including an 0-18 mark in the Big 12, Iowa State rallied behind a defense-first approach and the emergence of Izaiah Brockington, a Penn State transfer who led the team in scoring.

“When that final buzzer went off, it hurt a little bit because the season’s over,” Iowa State’s George Conditt IV said, “but at the same time you have to hold your head up high, because we quite literally turned this program around.”

Gabe Kalscheur and Tyrese Hunter paced the Cyclones with 13 points apiece on Friday, while Brockington followed with 11.

After pulling to within five on a Brockington 3-pointer with 9:08 left, Iowa State struggled to keep pace.

The Cyclones were unable to overcome 36.8 percent shooting, including a 4-for-22 showing from 3-point range. The Hurricanes finished at 46.4 percent from the field. McGusty had four treys, one more than Waardenburg.

Aljaz Kunc pulled down a game-high nine rebounds for the Cyclones, who wound up with a 42-34 advantage on the glass.

Miami, which committed just seven total turnovers in its first- and second-round victories, gave the ball away 14 times on Friday. That might have loomed as a bigger advantage for the Cyclones had it not been for their own ball-control woes. Iowa State had 18 turnovers, its third straight NCAA Tournament game with double digits in that category.

Miami shot 48.1 percent in the first half compared to 43.3 percent for Iowa State and took a 32-29 advantage into intermission.

The Cyclones remained close behind their usual calling cards, forcing the Hurricanes into eight turnovers while outrebounding them 19-15. Iowa State closed the first half on a 6-3 run, getting four points from Brockington over that stretch.
McGusty led all scorers in the first half with 14 points on 5-for-8 shooting.