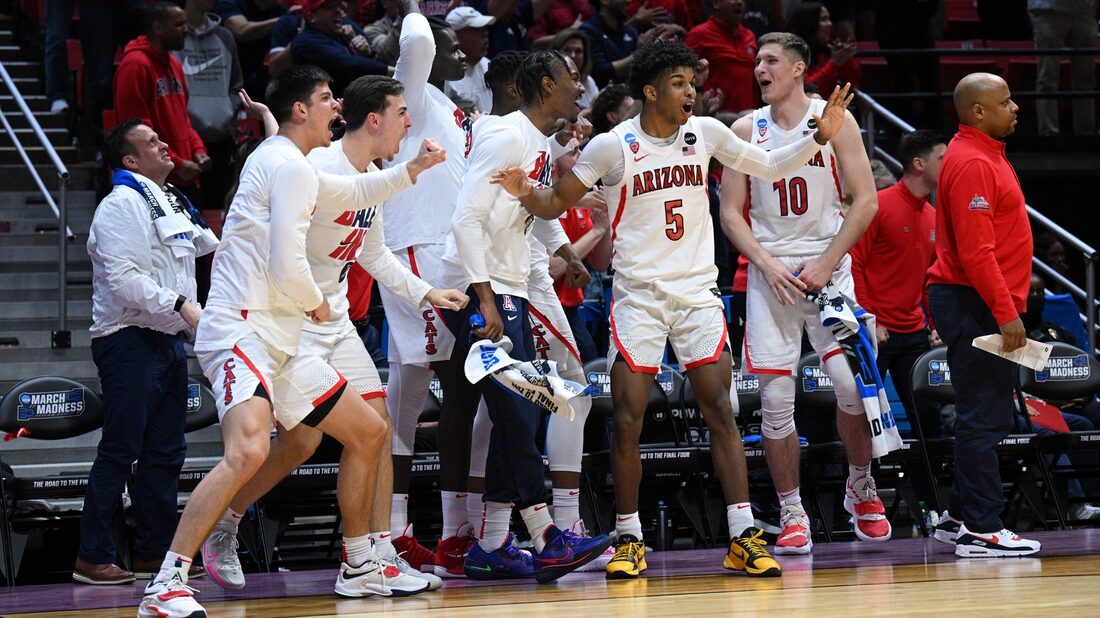 Bennedict Mathurin and Christian Koloko combined for 58 points, including all 10 of their team’s overtime points, to carry #1 seed Arizona past #9 TCU 85-80 in overtime in the second round of the NCAA Tournament on Sunday night in San Diego.

Mathurin scored 30 points, including a monster poster dunk and the 3-pointer that forced overtime. Koloko had a career-high 28 points on 12-of-13 shooting and grabbed 12 rebounds.

Arizona (33-3) advanced in the West Region to face fifth-seeded Houston in the Sweet 16 Thursday in San Antonio.

The Wildcats got away despite the heroics of TCU’s Eddie Lampkin Jr., who posted 20 points on 8-of-9 shooting with 14 rebounds, and Chuck O’Bannon, who scored a team-high 23 points. The Horned Frogs (21-13) were on the wrong side of an instant classic that featured 11 lead changes and 13 ties.

Arizona coach Tommy Lloyd said he “believed the whole time” that his team would pull out the win. He also praised TCU and in particular Lampkin, whom he was seen consoling after the game.

“I thought Lampkin gave us our lunch a little bit. For him to get 10 offensive rebounds is incredible,” Lloyd said. “I thought he was the difference today in the game and put them in position to win.”

Down nine with less than eight minutes left in regulation, TCU managed to hold Arizona without a field goal for more than five minutes while going on a 12-0 run. Mike Miles Jr.’s tough layup gave TCU a 68-67 lead, and it grew to 70-67 before Dalen Terry broke the Arizona drought with a game-tying 3-pointer with 2:43 left.

Lampkin scored the Horned Frogs’ final five points of regulation. He beat Koloko inside to put TCU up 72-70, and another layup made it 75-72 with 36 seconds left.

Mathurin drained a game-tying 3 from the top of the key with 12.9 seconds. On TCU’s last possession, Miles drew contact and lost the ball, and no foul was called. Terry ran with it and elevated for a lay-in, but he didn’t release his shot before the clock hit zeroes.

In overtime, Mathurin made a layup and two free throws to hand Arizona an 81-77 lead. Miles converted a three-point play with 1:44 left in overtime, and Mathurin responded with a hoop, but he missed his free throw for an 83-80 margin.

O’Bannon missed a 3 to tie, and Koloko’s two-handed putback slam with 9.5 seconds allowed Arizona to escape the upset bid.

Miles finished with 20 points for TCU but shot just 5 for 20, and Emanuel Miller scored 10 before fouling out in overtime.

Koloko scored 18 points and grabbed six boards in the first half and Arizona led 39-36 at halftime. The Horned Frogs went ahead 40-39 early in the second when Miles blocked Azuolas Tubelis’ layup try and Damion Baugh scored on a fast break. They grew it to 50-44 when Miles hit a 3 with 16:40 to play.

It was tied at 52 when Mathurin went to the basket and threw down a one-handed slam dunk over Lampkin, firing up the crowd. The Wildcats rode that wave to a five-point lead, and after four TCU free throws they came back with a mini 8-0 run to make it 67-58 with 7:52 to go, setting the table for a wild finish.