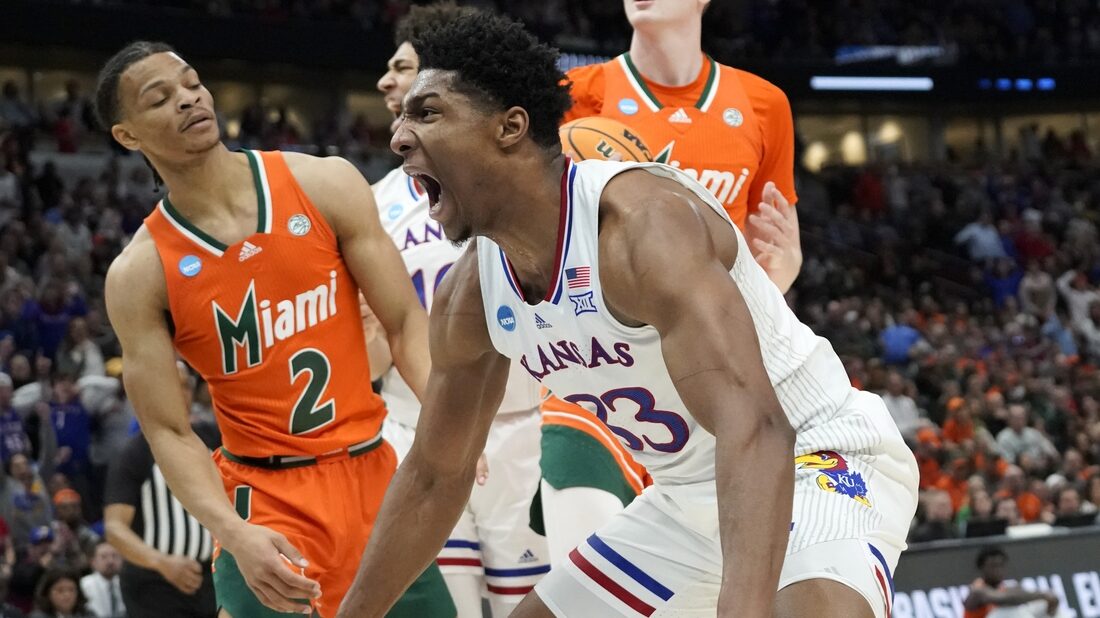 Kansas (32-6) advances to the Final Four in New Orleans, where the Jayhawks will meet South regional champion Villanova in a national semifinal on Saturday.

Kansas swiftly erased a six-point halftime deficit, scoring 19 of the first 24 points after intermission en route to a 47-15 advantage in the second half. The eruption included 10 straight points in a 1:40 span, punctuated by McCormack’s three-point play off a fast break that put the Jayhawks ahead 48-40 with 14:21 remaining.

Christian Braun’s 3-pointer 1:06 earlier gave Kansas the lead for good and marked the Jayhawks’ first made trey of the afternoon after starting the game with seven successive misses from long range.
Braun added 12 points for Kansas, which shot 59.3 percent in the second half.

Kameron McGusty scored 18 points for Miami, while Isaiah Wong followed with 15. The Jayhawks outrebounded the Hurricanes 41-28.

Miami closed the first half on a 9-2 run to take a 35-29 lead into the break. Kansas stayed afloat despite missing each of its five attempts from 3-point range and shooting 3-for-9 from the free-throw line in the first 20 minutes.

McGusty led all scorers with 14 points on 5-for-10 shooting in the first half as Miami went 13-for-27 (48.1 percent) as a team. The Hurricanes especially excelled at getting Jayhawks defenders to move on up-fakes, using their quickness to either get to the basket or create better looks.

Kansas improved to 16-10 all-time in Elite Eight games, including 4-5 under coach Bill Self, who took the helm before the 2003-04 season.