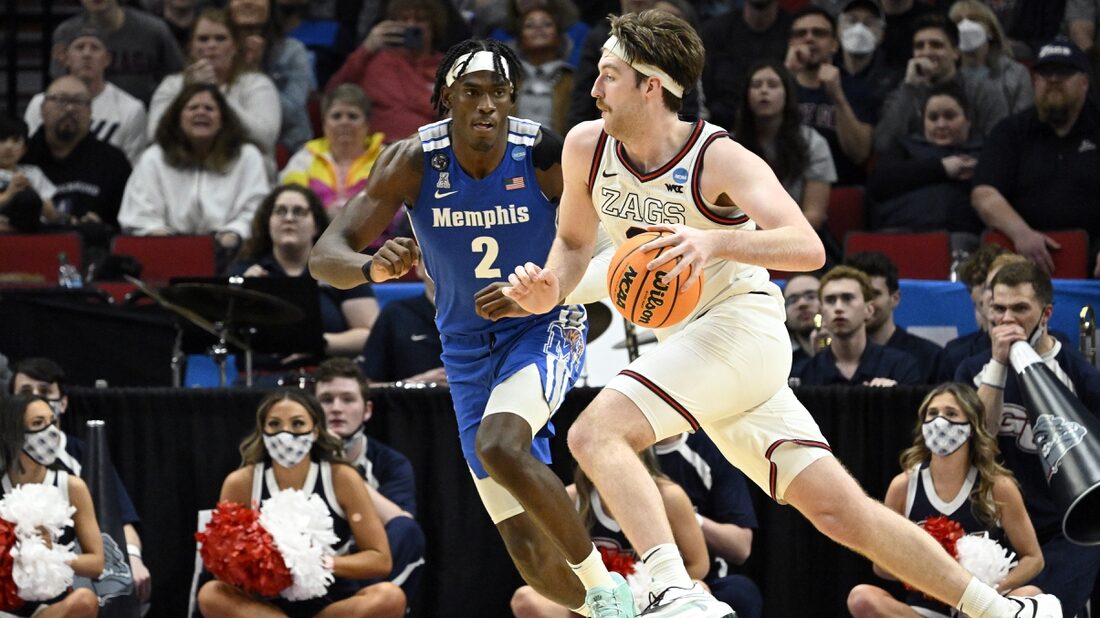 Top-seeded Gonzaga was tested more than expected in the first two rounds of the NCAA Tournament while reaching the Sweet 16 for the seventh straight time.

Now the Bulldogs will attempt to play two strong halves when they face fourth-seeded Arkansas on Thursday night in the West Regional semifinals at San Francisco.

The Razorbacks (27-8) will run a slew of athletic players against the Bulldogs (28-3) as they attempt to reach the Elite Eight for the second straight season. Arkansas lost to eventual national champion Baylor last season.

“We’re playing a team that a lot of people think is going to win the national championship,” Razorbacks coach Eric Musselman said. “Nobody is even talking about Arkansas having a chance to win this game.”

The Razorbacks will have to slow a potent Gonzaga attack that scored 109 combined second-half points in wins over 16th-seeded Georgia State and ninth-seeded Memphis to rebound after lethargic first halves. In fact, the Bulldogs didn’t take the lead for good against Georgia State until just under 12 1/2 minutes remained.

“These are all tough in their own ways,” Gonzaga coach Mark Few said. “That 1-16 is a real mental situation where you’re trying not to play like this, because you don’t want to be the one that gets upset by the 16. From here on out they’re all tough. They’re all physical, they’re all great athletes or great defenses or great offenses or both.”

The player Arkansas needs to corral most is second-team All-American forward Drew Timme. He averaged 28.5 points in the two wins but it was like a “Timme Timer” went off at halftime as he scored 43 of his 57 total points after intermission.

“I would like to stop doing that,” Timme said. “I would like to do a better job in the first half because that’s not a recipe to go far and win a lot of games. Credit to everyone believing in me and continuing to push me and keep having confidence in me.”

Bulldogs point guard Andrew Nembhard also has been key and averaged 16 points and eight assists in the two wins. Nembhard had 11 assists against Georgia State and followed up with 23 points two nights later when Gonzaga held off Memphis.

The Razorbacks defeated 13th-seeded Vermont and 12th-seeded New Mexico State to return to the Sweet 16.

Arkansas posted its lowest point total of the season in the 53-48 win over New Mexico State, prevailing despite shooting an anemic 27.5 percent from the field.

However, returning to this point is exactly what Razorbacks forward Jaylin Williams thought would happen.

“It’s a great feeling, but it’s like a standard now for us,” Williams said. “It’s our standard to get to where we were last year. It is a great feeling knowing that we are one of the last teams standing.”

Musselman said his team will need to raise its effort to compete with the Zags.

“They’ve been ranked in the top five for the entire season, deservedly so,” Musselman said. “This team is really talented and as good as anybody in the country so you have to play at an elite level to give yourself a chance to win.”

Few is also concerned. He knows the Razorbacks recovered from an 0-3 start in Southeastern Conference play to be a top-four seed and he sees the way Arkansas shut down New Mexico State’s offense.

“They’re very athletic, evenly sized and can really guard,” Few said. “Their defense is kind of what jumps out at you, right off the page.”

Gonzaga won the lone previous meeting, 91-81 in the fifth-place game at the 2013 Maui Invitational.