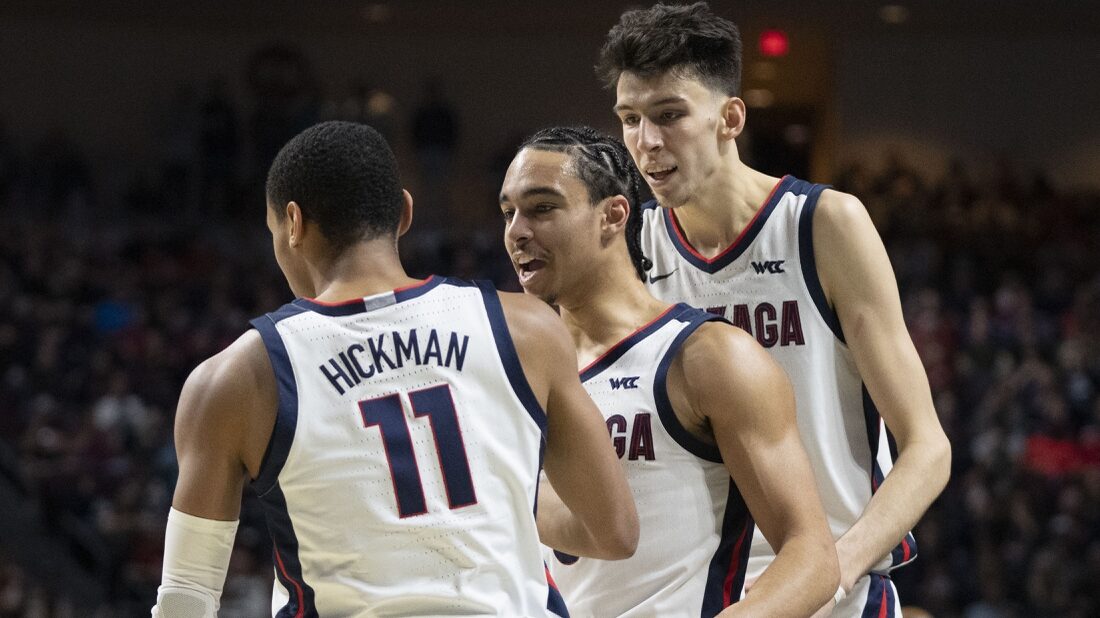 Drew Timme scored 22 points as #1 Gonzaga held off a late rally to defeat San Francisco 81-71 Monday night in the semifinals of the West Coast Conference tournament in Las Vegas.

Andrew Nembhard and Chet Holmgren both added 17 points for the Bulldogs (25-3), who will play the winner of Monday’s late game between #17 Saint Mary’s and Santa Clara in the tournament’s championship game Tuesday night.

Khalil Shabazz scored 23 of his game-high 27 points in the second half for the Dons (24-9), including a leaning, left-handed scoop shot that capped an 11-0 run and pulled San Francisco within 77-68 with 2:57 remaining.

Julian Rishwain added 20 points for the Dons. Jamaree Bouyea, a first-team all-WCC selection, was limited to five points of 1-for-11 shooting, including 0 of 7 from 3-point range.

Timme scored the game’s first seven points. Holmgren then took a pass from Nembhard just outside the top of the 3-point circle, drove the lane and spun between two defenders before finishing with a dunk to make it 9-0.

San Francisco’s Gabe Stefanini sank a 3-pointer, but Timme scored on a jumper and Holmgren followed with a 3-pointer to make it 14-3.

Holmgren made another dunk to extend the lead to 16-5.

Timme scored 12 points in the first half despite playing only nine minutes because of foul trouble. The Zags led 47-27 at the intermission after shooting 20 of 31 (64.5 percent) from the field.

Shabazz and Bouyea, whom San Francisco coach Todd Golden called the best guards in the conference after the Dons’ 75-63 quarterfinal victory over BYU on Saturday, combined for eight points on 3-for-17 shooting in the first half and were 0 of 11 from 3-point range.

The Dons played without first-team, all-conference forward Yauhen Massalski, who sustained a knee injury in the quarterfinals.

In this article:cbb-gnzg, gonzaga, ncaab