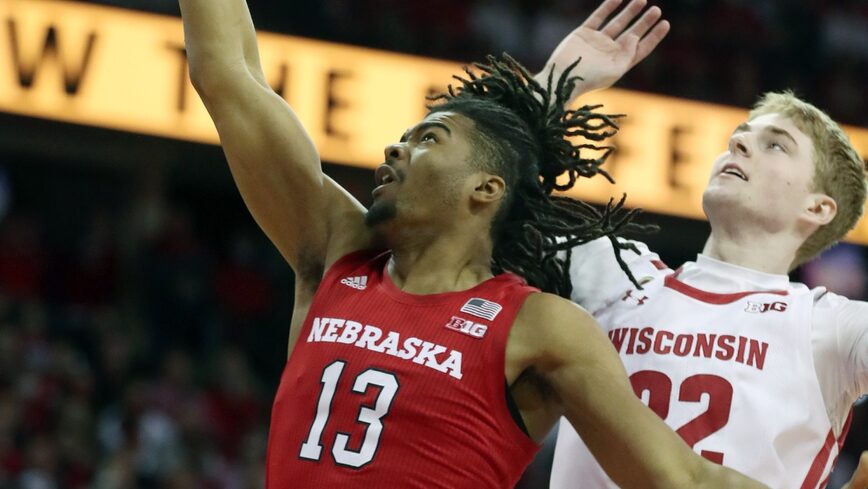 Alonzo Verge Jr. scored a game-high 26 points, including a clutch 3-pointer with 1:50 remaining, to lift Nebraska to a 74-73 upset of #10 Wisconsin on Sunday in Madison, Wis.

The Cornhuskers (10-21, 4-16 Big Ten) rallied from a nine-point deficit with 5:48 remaining, preventing Wisconsin (24-6, 15-5) from claiming its first outright Big Ten regular-season title since 2015 unless Illinois loses to Iowa on Sunday night.

Verge shot 10 for 16 from the field and added a game-high six assists to go along with five rebounds for the Cornhuskers, who posted their first victory over an AP top-10 team since 2014.

Derrick Walker added 15 points and a game-high tying seven rebounds for the Cornhuskers, who trailed by as many as 10 in the second half.

Nebraska, which had lost seven straight to the Badgers dating to 2018, overcame the absence of Bryce McGowens, a top candidate for Big Ten freshman of the year, who was out with an injured wrist.

During the run, Johnny Davis, the Badgers&rsquor; leading scorer (20.2 ppg) injured his lower body after being flagrantly fouled by Trey McGowens during a drive to the basket.

McGowens was ejected, while Davis was taken to the locker room and didn&rsquor;t return. He finished with 10 points on 4-for-4 shooting to go along with four rebounds in 12 minutes of play.

The Badgers stretched their lead to 62-52 following Jahcobi Neath&rsquor;s layup with 12:19 left.

Nebraska, however, scored 10 straight points late in the half to take a 72-71 lead on Verge&rsquor;s 3-pointer with 1:50 remaining. Verge hit two free throws with 37 seconds left to extend the lead to three.

Hepburn was fouled taking a 3-pointer on Wisconsin&rsquor;s next possession with 19 seconds remaining, but he made just two free throws. C.J. Wilcher missed the front end of a one-and-one, giving Wisconsin a chance to win, but Hepburn missed a 3-pointer with less than a second remaining.

In this article:cbb-wisc, ncaab, nebraska, wisconsin