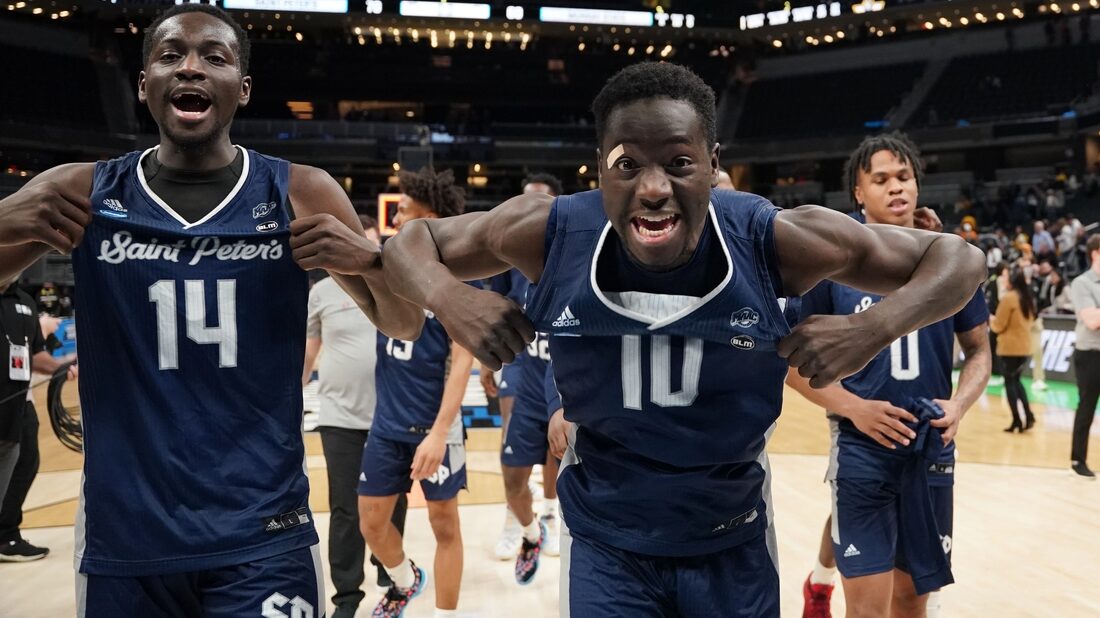 Saint Peter’s added to its resume as the patron saint of upsets in the 2022 NCAA Tournament by knocking off #7 Murray State 70-60 on Saturday night to move from the East Region in Indianapolis to the Sweet 16 two days after winning the program’s first NCAA Tournament game.

Philadelphia is the next stop for the 15th-seeded Peacocks and a Friday night date with the winner of Sunday’s second-round game between #6 seed Texas (21-11) and third-seeded Purdue (28-6).

Saint Peter’s (21-11) never trailed in the second half, led by KC Ndefo with 17 points and 10 rebounds, and another clutch late-game effort from reserve guard Doug Edert. Edert had 13 points, including 10 in the final six minutes to lift the Peacocks, who survived an off night from Daryl Banks III.

Murray State (31-3) was looking for its first trip to the Sweet 16 but fell to 5-18 all-time in the NCAA Tournament. The Racers were 18 of 52 from the field. Murray State got 19 points from Justice Hill and 14 from Tevin Brown.

R.J. Davis racked up a career-high 30 points as the Tar Heels posted an overtime win over the defending national champion Bears in an NCAA Tournament second-round game.

After squandering a 25-point second-half lead and playing minus two starters down the stretch, the eighth-seeded Tar Heels (26-9) never trailed in overtime against the top-seeded Bears (27-7). Davis had a three-point play in the extra session. North Carolina’s Brady Manek poured in 26 points before he was ejected for a flagrant foul.

Adam Flagler pumped in 27 points, James Akinjo had 20 and Jeremy Sochan added 15 points and 11 rebounds for Baylor, which rallied in the last 10 1/2 minutes of regulation.
(Portland, Ore.)

Tyger Campbell’s 16 points led a balanced attack as the Bruins pulled away from the Gaels in the second round of the NCAA Tournament.

Jaime Jaquez Jr. added 15 before leaving with an ankle injury at the 6:58 mark of the second half. UCLA (27-7) also got 14 points each from Jules Bernard and Johnny Juzang. The Bruins canned 56.5 percent of their shots against one of the best defensive teams remaining in the field and committed only six turnovers.

Logan Johnson scored a game-high 18 points for the Gaels (26-8), while Matthias Tass added 14. Tommy Kuhse contributed 11 points and six assists, while Alex Ducas hit for 11 points but made only 4 of 12 shots.

Reserve Remy Martin led the Jayhawks’ scorers for the second straight game in the NCAA Tournament with 20 points and Jalen Wilson added 14 points and 14 rebounds in defeating the Bluejays to advance to the Sweet 16.

Creighton (23-12) played short-handed after the loss of inside threat Ryan Kalkbrenner, who suffered a knee injury in the first round. Yet Creighton waged a gallant effort behind 24 points and 12 rebounds from Arthur Kaluma.

But the Jayhawks (30-6) made enough plays down the stretch to advance to next week’s Midwest Regional. The 30-win season is the 16th for Kansas, which tied Kentucky for most all-time wins (2,353). The Sweet 16 appearance will be the Jayhawks’ 24th.

Noah Horchler had a double-double, Al Durham scored 13 points and A.J. Reeves added 12 as the Friars routed the Spiders in an NCAA Tournament second-round game.

Nate Watson and Jared Bynum each scored 10 points for Providence (27-5), which advanced to the Sweet 16 for the first time since 1997. The Friars will play top-seeded Kansas in a Midwest Regional semifinal in Chicago on Friday. Horchler scored 16 points, shooting 4-for-6 from 3-point range, and also grabbed 14 rebounds. Bynum had six assists and Reeves had five.

Nathan Cayo scored 18 points for the Spiders (24-13). Grant Golden scored 10 points but Jacob Gilyard was limited to four points on 2-for-10 shooting two days after recording 24 points in the upset victory over Iowa. He also was assessed a technical foul in the second half.

Hunter Dickinson scored 27 points with 11 rebounds and Eli Brooks added 23 points, including 18 in the second half, as the Wolverines upset the Volunteers to advance to the Sweet 16.

Michigan is back in the Sweet 16 for the second season in a row under head coach Juwan Howard. The Wolverines reached the Elite Eight last season before falling to UCLA.

Tennessee (27-8) was led by point guard Kennedy Chandler’s 19 points and nine assists. Josiah-Jordan James added 13 but was 5 of 13 from the field and 0 for 6 from 3-point range. Tennessee was 2 of 18 from beyond the arc.

JD Notae collected 18 points and eight steals as the Razorbacks turned back the Aggies in their second-round game.

Jaylin Williams had 10 points and 15 rebounds for the Razorbacks (27-8), who overcame shooting just 27.5 percent from the floor — and 18.8 percent from 3-point range — to advance to the Sweet 16 for the second straight year. They’ll next face #1 seed Gonzaga, which defeated #9 Memphis later Saturday.

Johnny McCants recorded 16 points and 12 rebounds for the Aggies (27-7), whose 8-to-19 assist-to-turnover ratio foiled them in their bid to advance to the Sweet 16 for the first time since 1992.

Drew Timme scored 21 of his 25 points in the second half to help the Bulldogs rally from a 12-point deficit and notch a victory over the Tigers in the second round of the West Regional.

Andrew Nembhard made five 3-pointers and scored 23 points for top-seeded Gonzaga (28-3), which advanced to the Sweet 16 for the seventh straight time. Rasir Bolton scored 17 points and Chet Holmgren contributed nine points, nine rebounds and four blocked shots before fouling out as the Bulldogs won for the 21st time in the past 22 games. Gonzaga will face fourth-seeded Arkansas (27-8) in the Sweet 16 on Thursday.

DeAndre Williams recorded 14 points and seven rebounds for ninth-seeded Memphis (22-11), which lost for just the third time in the past 16 games. Tyler Harris added 13 points and Lester Quinones had 10 for the Tigers.