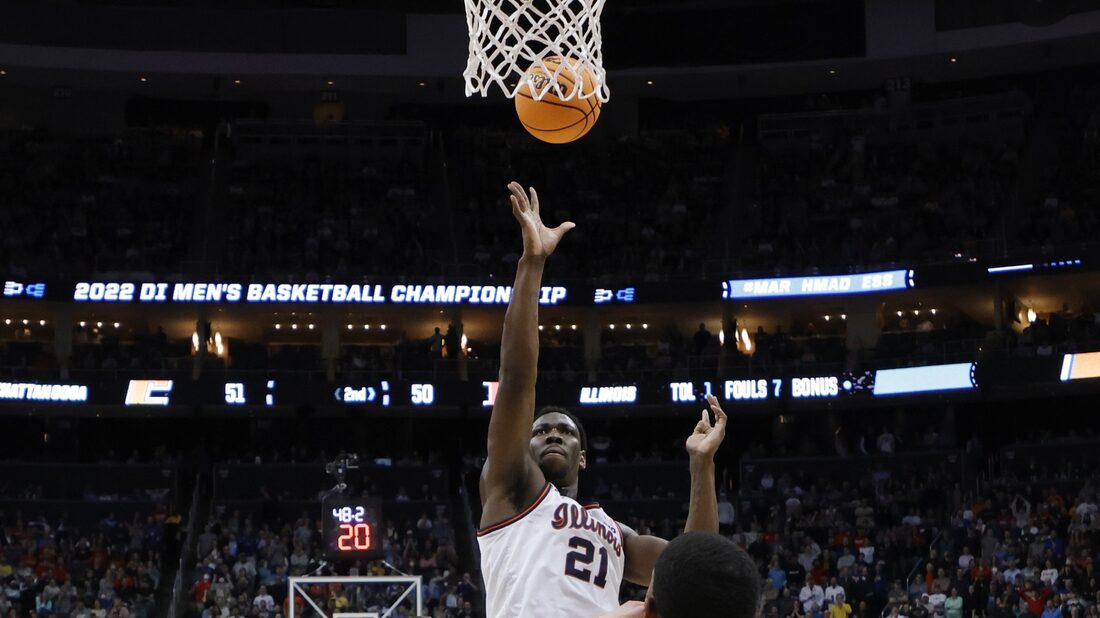 The Mocs (27-8) had two chances to win on their final possession, but leading scorer Malachi Smith had his first shot blocked by Coleman Hawkins and then missed a 17-footer as time expired.

Kofi Cockburn scored 17 points and grabbed 13 rebounds for the Fighting Illini (23-9), who will face fifth-seeded Houston in the second round on Sunday. Plummer finished with 15 points and Hawkins added 10 points and eight rebounds.

Smith scored 12 points and pulled down eight rebounds for Chattanooga, but he made only 4 of 20 shots from the field and missed his last eight attempts.

Justin Moore scored 21 points and Jermaine Samuels added 15 as the Wildcats improved to 16-0 all-time against the Blue Hens.

Collin Gillespie chipped in with 14 points, Caleb Daniels added 13 and Eric Dixon had 12 for Villanova (27-7), which will face seventh-seeded Ohio State in the second round on Sunday.

Jyare Davis scored 17 points and Andrew Carr contributed 13 for Delaware (22-13), which fell to 0-6 in program history in the NCAA Tournament.

Kyler Edwards scored 25 points and grabbed seven rebounds to lead the Cougars past the Blazers.

Edwards led a balanced and efficient shooting effort as Houston (30-5) advanced to the second round for the fourth consecutive season.

Fabian White Jr. had 14 points and six rebounds for Houston, which shot 53.3 percent overall. UAB (27-8), which was making its first NCAA Tournament appearance since 2015, was led by Jordan Walker with 17 points.

E.J. Liddell collected 16 points and 10 rebounds and Malaki Branham added 14 points to lift the Buckeyes to a win over the Ramblers.

Ohio State (20-11) had lost four of five. Buoyed by the return of Kyle Young (concussion) and forward Zed Key (right ankle sprain, the Buckeyes looked like a different team.

Braden Norris, from the Columbus suburb of Hilliard, Ohio, led Loyola (25-8) with 14 points.

Christian Koloko contributed 17 points, 13 rebounds, six assists and five blocked shots in a stellar all-around performance to help the Wildcats sail to a victory over the Raiders.

Bennedict Mathurin scored a team-best 18 points and Dalen Terry added 16 points and seven rebounds for Arizona, which will face ninth-seeded TCU in Sunday’s second round.

Jaden Ivey scored 22 points and Zach Edey had 16 points and nine rebounds to lead the Boilermakers to a victory over the Bulldogs.

Azar Swain scored 18 points for Yale (19-12), which earned its sixth NCAA appearance with a 66-64 victory over Princeton in the Ivy League tournament title game.

Andrew Jones scored 21 points to lead a balanced offensive attack as the Longhorns turned it on in the second half against the Hokies.

Carr added 15 points and nine assists and Timmy Allen scored 14 points for Texas (22-11), which went 10 for 19 from beyond the arc and snapped a three-game losing streak.

Johnny Davis scored the Badgers’ final 14 points and survived a 3-point barrage from the Raiders.

Davis, the Big Ten player of the year, finished with 25 points, including 17 in the second half. Wisconsin (25-7) will face 11th-seeded Iowa State on Sunday.

Colgate (23-12), the Patriot League tournament champion, had won 15 in a row. Nelly Cummings had 20 points and Tucker Richardson 15 on five 3-pointers for the Raiders.

Freshman Tyrese Hunter scored a career-high 23 points and Izaiah Brockington added 19 as the Cyclones held off the Tigers.

Tari Eason had 18 points and Darius Days tallied 14 points and 12 boards for LSU (22-12), playing its first game under interim coach Kevin Nickelberry after coach Will Wade and associate head coach Bill Armstrong were dismissed Saturday in the wake of an NCAA notice of allegations of significant misconduct in the program.

Jabari Smith and Walker Kessler each delivered double-doubles as the Tigers eased to a win over the Gamecocks.

Smith collected 20 points, 14 rebounds and four assists for Auburn (28-5), which advances to the second round on Sunday to face 10th-seeded Miami. Kessler chipped in 13 points and 10 rebounds while registering nine blocked shots.

Charlie Moore connected on two free throws with 3 seconds left as the Hurricanes withstood a late-game rally from the Trojans.

Bryson Williams and Terrence Shannon Jr. scored 20 points apiece and combined to make 7 of 9 shots from 3-point range for the Red Raiders, who were never challenged after bolting to an early 18-4 lead.

In its first appearance in the tournament since 1996, Montana State (27-8) got 12 points from Xavier Bishop and nine each from Nick Gazelas and RaeQuan Battle.

Cormac Ryan shot 7-for-9 from 3-point range and scored a career-high 29 points as the Fighting Irish upended the Crimson Tide.

Notre Dame (24-10) advanced to play Texas Tech (26-9) on Sunday. Blake Wesley added 18 points for the Fighting Irish, who are seeking their first Sweet 16 appearance since 2016.

Alabama (19-14) played most of the game without point guard Jahvon Quinerly, who sustained a left knee injury early in the first half. Keon Ellis scored 16 points to lead the Crimson Tide.

Paolo Banchero scored 17 points to lead all five Blue Devils starters in double figures in their win over the Titans to begin the final NCAA Tournament for legendary coach Mike Krzyzewski.

Duke (29-6) entered the tournament with losses in two of its previous four games. Krzyzewski is coaching in his record 36th NCAA Tournament, pursuing a sixth national title. He now owns a 98-30 record in tournament games.

Joey Hauser tied his career high with 27 points as the Spartans held off the Wildcats.

Michigan State (23-12) will face seed Duke in the second round on Sunday. A.J. Hoggard had 14 points and Gabe Brown contributed 12 for the Spartans.