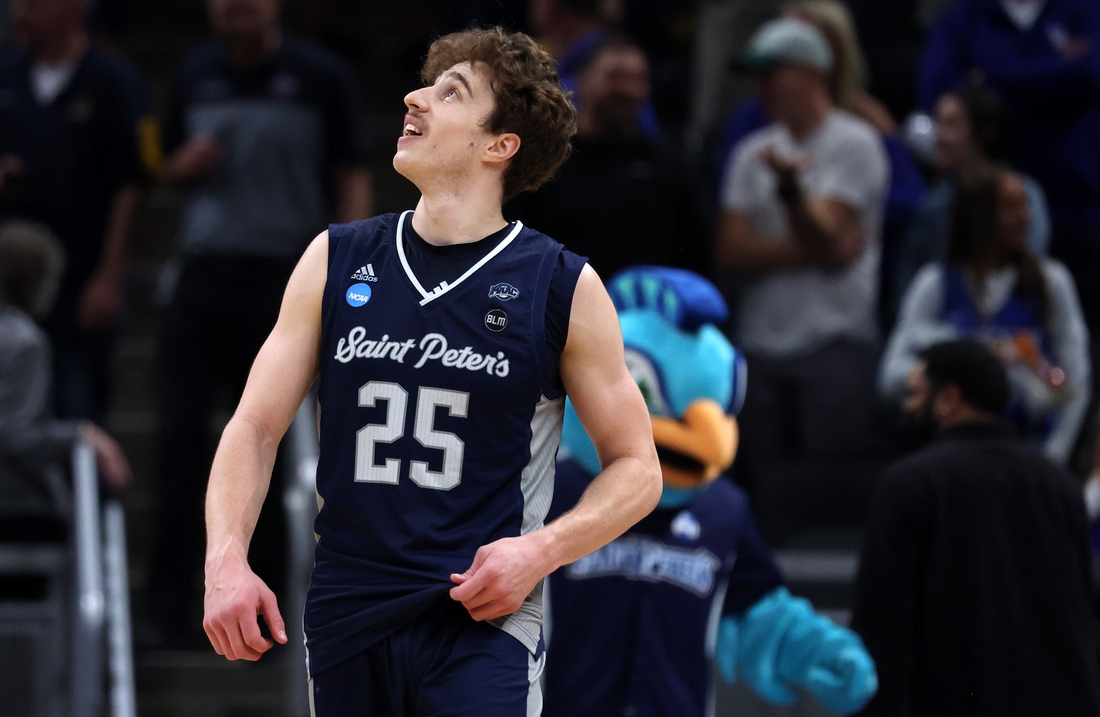 Daryl Banks III scored a career-high 27 points with five 3-pointers, the Peacocks made 18 of 21 free throws and Doug Edert salted away the win with two late free throws and finished with 20 points.

Saint Peter’s (20-11) awaits Thursday’s winner of #7 seed Murray State against #10 seed San Francisco in the Round of 32 on Saturday.

Oscar Tshiebwe had 30 points and 16 rebounds to lead Kentucky (26-8) with his 16th consecutive double-double. While the Wildcats outscored Saint Peter’s 23-18 on free throws, Kentucky shot just 65.7 percent at the line and missed 12 times.

Matthew Mayer scored a season-high 22 points as the top-seeded Bears shrugged off early foul trouble and dominated the Spartans in first-round action.

Baylor is looking to become the first repeat NCAA champs since Florida in 2006-07. Jeremy Sochan added 15 points for the Bears (27-6), with Flo Thamba adding 14 and James Akinjo racking up 10 points and 10 assists in the win. The Bears set their school record for largest margin of victory in the NCAA Tournament.

Joe Bryant Jr. led the Spartans (24-7) with 15 points in the loss. Norfolk State, which won both the MEAC regular-season title and postseason tournament, played without Jalen Hawkins, its second-leading scorer, in the first half because of a violation of team rules.

Brady Manek scored a season-high 28 points as the Tar Heels blew out the Golden Eagles in first-round play.

The result gave Hubert Davis a victory in his first NCAA Tournament assignment as head coach after replacing three-time national champion Roy Williams last spring. Caleb Love scored 21 of his 23 points in the first half as the Tar Heels (25-9) won for the seventh time in their last eight games.

Olivier-Maxence Prosper scored 16 points and Darryl Morsell had 11 points for Marquette (19-13), which finished its season under first-year coach Shaka Smart. It was a rough return to the Lone Star State for Smart, who had been the Texas coach.

Tommy Kuhse added 19 points and six assists as the fifth-seeded Gaels (26-7) led by as many as 34 in the easy victory. Alex Ducas tallied 13 points and Matthias Tass had 12 points and seven rebounds.

Trayce Jackson-Davis scored 12 points and Xavier Johnson added 11 for the 12th-seeded Hoosiers (21-14), who couldn’t keep up with the Gaels after beating Wyoming in the First Four on Tuesday night.

Hunter Dickinson scored 21 points and the Wolverines outran the Rams in the second half of their first-round game at the NCAA Tournament.

Colorado State (25-6) controlled the first half but ran out of magic against the bigger, more physical Wolverines (18-14).

Colorado State’s Dischon Thomas had a team-high 15 points and David Roddy, the player of the year in the Mountain West, was held to 13 points, limited largely to a face-up game against the 7-foot-1 Dickinson.

The Vols smothered the Lancers in a first round NCAA Tournament statement victory.

Santiago Vescovi scored 18 points, Josiah-Jordan James had 17 with nine rebounds and Tennessee (27-7) force fed a basketball clinic to underdog Longwood (26-7) with 29 assists on 33 field goals and 22 points off turnovers.

A 13-0 Tennessee run to end the first half deflated the Lancers and the Vols maintained all-gas, no-brake focus as Rick Barnes secured his 25th career tournament win. Barnes said this week Tennessee would respond to being a 3 seed. Tennessee’s lead hovered around 30 points for most of the second half.

Al Durham and Noah Horchler each scored 13 points as the favored Friars held off the Jackrabbits in a first-round game.

Baylor Scheierman had 18 points and 10 rebounds, and Alex Arians and Douglas Wilson each scored 13 points for the Jackrabbits (30-5).

Jacob Gilyard scored 24 points to help the Spiders to an upset victory against the Hawkeyes in an NCAA Tournament Midwest Region first-round game in Buffalo.

Tyler Burton notched a double-double of 18 points and 11 rebounds for the Spiders (24-12). Nathan Cayo added 15 points for Richmond, including a key layup that produced a three-point lead with 1:24 to go and a three-point play 50 seconds later.

Freshman guard Trey Alexander scored seven of his game-high 18 points in overtime as the Bluejays rallied past the Aztecs.

Ryan Kalkbrenner added 16 points and 10 rebounds for the Bluejays (23-11) before he suffered a left knee injury midway through overtime and was helped from the court. Alex O’Connell added 15 points and Arthur Kaluma scored 12 for Creighton.

Drew Timme recorded 32 points and 13 rebounds and the Bulldogs used a 21-0 burst to pull away from the pesky Panthers in a first-round victory.

Chet Holmgren scored 19 points and matched career highs of 17 rebounds and seven blocked shots for the top-seeded Bulldogs (27-3), who received a fierce battle from the 16th-seeded Panthers over the first 27 minutes.

Corey Allen scored 16 points for Georgia State (18-11), which trailed by two at halftime. The Panthers lost leading rebounder Eliel Nsoseme (9.8 per game this season) to a knee injury with 6:20 left in the first half, which hampered their inside defense.

DeAndre Williams scored 14 points on 7-for-8 shooting to help the Tigers produce a double-digit victory over the Broncos.

Landers Nolley II added 12 points as Memphis won an NCAA Tournament game for the first time since 2014. Jalen Duren contributed 10 points and 11 rebounds as the Tigers (22-10) won for the 13th time in the past 15 games.

Abu Kigab scored all 20 of his points in the second half for Boise State (27-8). The Broncos are 0-8 all-time in NCAA Tournament play.

Teddy Allen scored 37 points, including 15 in the final four minutes, to help lead the Aggies upset the Huskies in Buffalo and snap a 12-game losing streak in the NCAA Tournament.

Allen shot 10 of 24 from the floor and 4 of 7 from 3-point range for the Aggies (27-6). He also made all 13 free throw attempts (his team’s only shots from the line), including four inside the final 20 seconds to clinch the victory.

RJ Cole led UConn (23-10) with 20 points on 7-of-15 shooting, but UConn scored just 22 points in the first half and spent most of the game playing from behind.