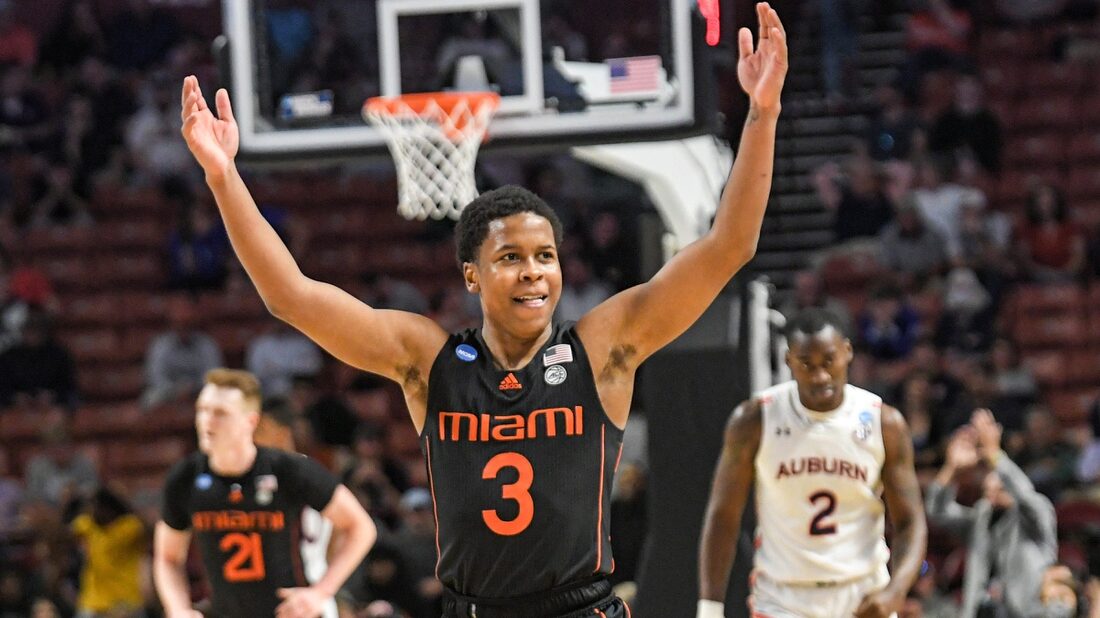 Isaiah Wong scored 21 points and Kameron McGusty added 20 as 10th-seeded Miami toppled second-seeded Auburn 79-61 in the second round of the NCAA Tournament’s Midwest Region on Sunday night at Greenville, S.C.

Charlie Moore had 15 points, nine rebounds, eight assists and three steals, and Jordan Miller added 12 points for the Hurricanes (25-10), who next will face 11th-seeded Iowa State in the Sweet 16 on Friday night in Chicago. The Hurricanes have won nine of their last 12 games.

Jaylin Williams and K.D. Johnson both tallied 12 points for Auburn (28-6). Wendell Green Jr. had 11 points and Jabari Smith notched 10 points on 3-of-16 shooting. Smith had 15 rebounds that helped the Tigers to a 47-39 edge on the boards.

Auburn made just 5 of 26 attempts from 3-point range in a disappointing conclusion for a team that once held the country’s #1 ranking earlier this season.

Gabe Kalscheur scored 22 points and the Cyclones capitalized on an early injury to Wisconsin point guard Chucky Hepburn, holding off the third-seeded Badgers in the second round.

Hepburn left with a left leg injury with 4:37 left in the first half and the Badgers up 22-19. Wisconsin (25-8), first in the nation in fewest turnovers per game at 8.4, turned the ball over 17 times, leading to 11 Cyclones points. Johnny Davis, the Big Ten Player of the Year, had 17 points for Wisconsin, but made just 4 of 16 shots, including 0 of 7 beyond the arc.

Trevion Williams scored 22 points and Jaden Ivey had 18 to lead the Boilermakers past the Longhorns in the second round of the NCAA Tournament.

Purdue (29-7) will face 15th-seeded tournament Cinderella Saint Peter’s in the Sweet 16 at Philadelphia on Friday. Williams scored back-to-back baskets underneath to cap a 7-0 run and put Purdue in front 59-52 with just under eight minutes left. Ethan Morton’s wide-open 3-pointer from the right corner pushed the lead to 65-56.

Marcus Carr’s 3-pointer pulled Texas (22-12) within 74-71, but Ivey countered with a deep 3 from the top of the key with 1:01 left. The Boilermakers closed it out with four free throws. Carr had 23 points and Andrew Jones 17 for the Longhorns.

Taze Moore scored a game-high 21 points as the Cougars used a late run to pull away for a win over the Fighting Illini in a second-round game.

Jamal Shead added 18 points for the Cougars (31-5), who advanced to the Sweet 16 for the third straight season. Next they will face top-seeded Arizona on Thursday. Kyler Edwards contributed 15 points, six rebounds and four assists for Houston, which won despite making just 42.4 percent of its shots from the field. But the Cougars earned a 39-33 advantage in rebounds and converted 17 Illinois turnovers into 20 points.

Kofi Cockburn collected 19 points and eight rebounds for the Fighting Illini (23-10) in what might be the final game of his college career. Illinois canned just 17 of 50 attempts, hitting only 6 of 25 from the 3-point line.

Bennedict Mathurin and Christian Koloko combined for 58 points, including all 10 of the Wildcats’ points in overtime, in beating the Horned Frogs in the second round of the NCAA Tournament.

Mathurin scored 30 points, including a monster poster dunk and the 3-pointer that forced overtime. Koloko had a career-high 28 points on 12-of-13 shooting and grabbed 12 rebounds.

Collin Gillespie scored 20 points to lift the Wildcats to a win over the Buckeyes in the second round of the NCAA Tournament.

Jermaine Samuels added 17 points, Eric Dixon contributed 13 and Caleb Daniels had 11 for the Wildcats (28-7), who will face 11th-seeded Michigan in the Sweet 16. Villanova has won seven in a row overall and 12 of its last 13 games.

Paolo Banchero scored 19 points and the Blue Devils overcame a five-point deficit in the last five minutes to defeat the Spartans and extend coach Mike Krzyzewski’s career in the NCAA Tournament’s second round.

The Blue Devils appeared in trouble after Michigan State’s 13-2 run, but they converted on offense down the stretch to give Krzyzewski his 1,200th collegiate coaching victory. Duke closed the game on a 13-2 run. Second-seeded Duke (30-6) will meet #3 seed Texas Tech on Thursday.

Kevin Obanor racked up 15 points and 15 rebounds and the Red Raiders made all 10 of their free throws over the final two minutes to rally past the Fighting Irish in a rugged NCAA Tournament second-round game.

The Red Raiders (27-9) advanced to the Sweet 16, where they will face second-seeded Duke on Sunday. This is Texas Tech’s third trip to the Round of 16 in the last four NCAA Tournaments.

Dane Goodwin led Notre Dame (24-11) with 14 points, while Blake Wesley had 11 for the Fighting Irish.