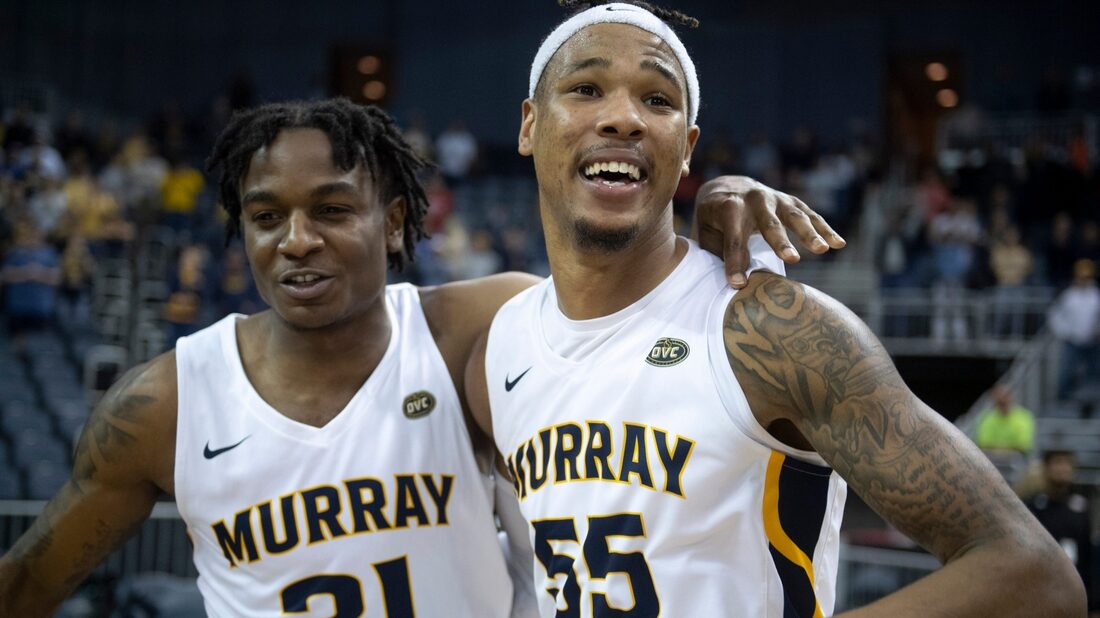 The writers’ and coaches’ polls might disagree, but when Murray State coach Matt McMahon takes a look at San Francisco, he sees a team that should be nationally ranked.

So are the Racers, who carry the #20 ranking into their Thursday night East Region matchup against the Dons in Indianapolis.

Seventh-seeded Murray State (30-2) hasn’t lost since a 71-58 defeat Dec. 22 at Auburn, which won the Southeastern Conference regular-season title and spent a fair chunk of conference play as the #1 team in the country. The Racers carry a 20-game winning streak into the NCAA Tournament.

Murray State did have to survive some close calls in the Ohio Valley Conference. Morehead State pushed the Racers to the limit twice, including a 71-67 nail-biter in the OVC tourney title game on March 5. Tennessee-Martin and Southeast Missouri State each delivered inspired efforts at home before taking two-point losses against the Racers.

Murray State has answered every challenge, thanks to the trio of KJ Williams, Tevin Brown and Justice Hill. Williams averages team highs of 18.2 points and 8.6 rebounds, and he poured in 39 in a Feb. 10 win at Tennessee State.

Brown adds 16.9 points per game and is a steady threat from 3-point range. He put up a team-high 23 in the OVC title game. Hill averages 13.2 ppg, more than double his production as a freshman last season, while dishing out five assists per contests.

There has been much talk of a potential Murray State-Kentucky matchup in the second round that would be the ultimate cause game for the Racers against the big state school. When a local reporter asked McMahon about that possibility, he quickly shut it down.

That one game figures to be tough enough. Tenth-seeded San Francisco (24-9) earned a much-deserved at-large bid from the West Coast Conference even though it finished fourth behind Gonzaga, Saint Mary’s and Santa Clara.

Bouyea averages 16.7 points, 5.1 rebounds and four assists per game, sinking 46.8 percent of his field-goal attempts. Shabazz puts up 14 ppg, and he pumped in 27 in an 81-71 loss against #1 Gonzaga on March 7 in the WCC semifinals. Over his past eight games, Shabazz is averaging 19.9 points, with five games of 21 points or more.

San Francisco will also regain the services of center Yauhen Massalski (13.5 ppg, 9.4 rebounds), who sat out the loss to Gonzaga with a knee injury sustained in a March 5 win over BYU. Massalski gives the Dons solid inside-outside balance.

This is the Dons’ first NCAA tourney appearance since 1998, and they are aiming for their first tournament victory since 1979, when Bill Cartwright was their star player. San Francisco won two national championships in the mid-1950s with teams led by Bill Russell and K.C. Jones.

Bouyea stated that the Dons aren’t just going to the NCAAs this year for novelty’s sake.

“We want to be in the tournament to win games,” he said. “I don’t think this is the end of our journey. Hopefully, we get to a Sweet 16 or something like that.”