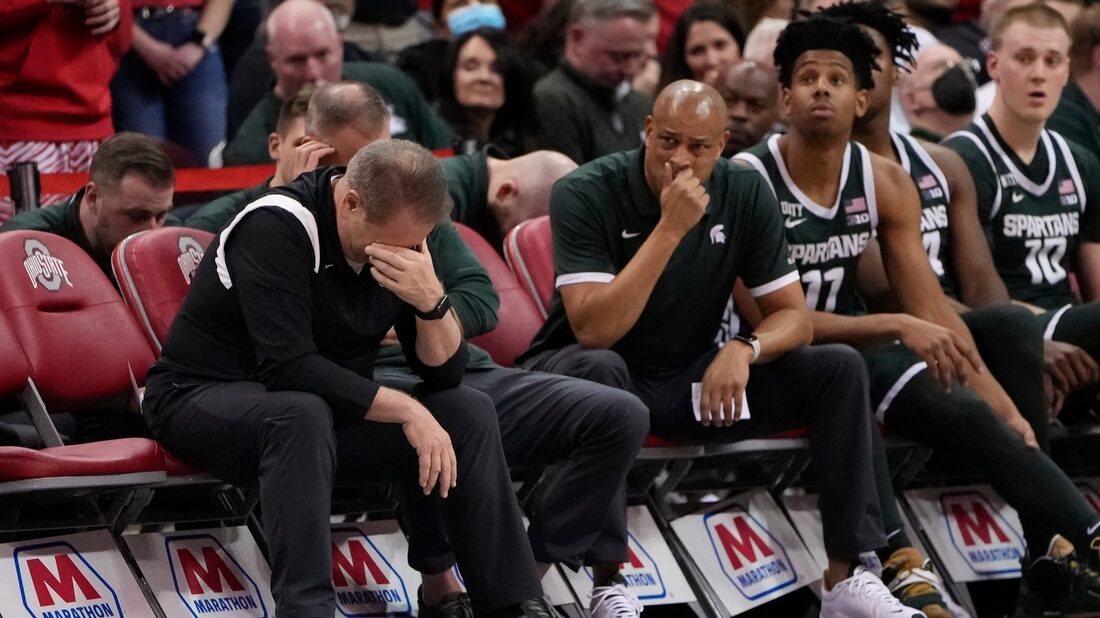 When Michigan State defeated Maryland on Feb. 1, the Spartans were ranked in the Top 20 and in the hunt for both the Big Ten title and a high NCAA Tournament seed.

In the rematch on Sunday, the Spartans find themselves in danger of getting left out of the tournament altogether. Entering the season finale for both clubs, the Spartans have lost seven of their past nine games since defeating the Terrapins.

The past two outings have been particularly troubling for coach Tom Izzo. Michigan State was manhandled on the road by archrival Michigan 87-70 and #23 Ohio State 80-69.

“I&rsquor;m angry with the way we played and don&rsquor;t anybody write it was about the two days on the road and all that because if we would have lost down the stretch and been fatigued, I could swallow that. But this was the start that beat us, not the end,” Izzo said. “So I&rsquor;m not really happy with how we played defensively.

“I am not happy with our leadership right now and we&rsquor;ve got to find a way to regroup.”

The Spartans (19-11, 10-9 Big Ten) won their most recent home game against then-#4 Purdue on Feb. 28. A home loss to unranked Maryland and an early flameout in the upcoming conference tournament could weigh heavily in the eyes of the NCAA Tournament committee.

“The schedule has made it difficult,” Izzo said. “Not games in a row, just the second half of the season schedule, we never get a chance to catch our breath. But the way we&rsquor;re playing I think our guys have to check their ticker a little bit because sooner or later you&rsquor;ve got to reach down and guard somebody. I mean, that&rsquor;s not a skill. That&rsquor;s an effort-related stat.”

Michigan State barely escaped with a 65-63 road win in its first meeting with Maryland. Malik Hall scored the game-winner with 1.9 seconds left.

Maryland (15-15, 7-12) has gotten hot down the stretch. The Terrapins have won four of their past five, including an 84-73 victory over Minnesota on Wednesday in their home finale. They had five players in double figures, led by Hakim Hart with 19 and Eric Ayala with 15.

“We are dangerous, man,” Ayala said. “I wouldn&rsquor;t want to play us in any games in the next few weeks.”