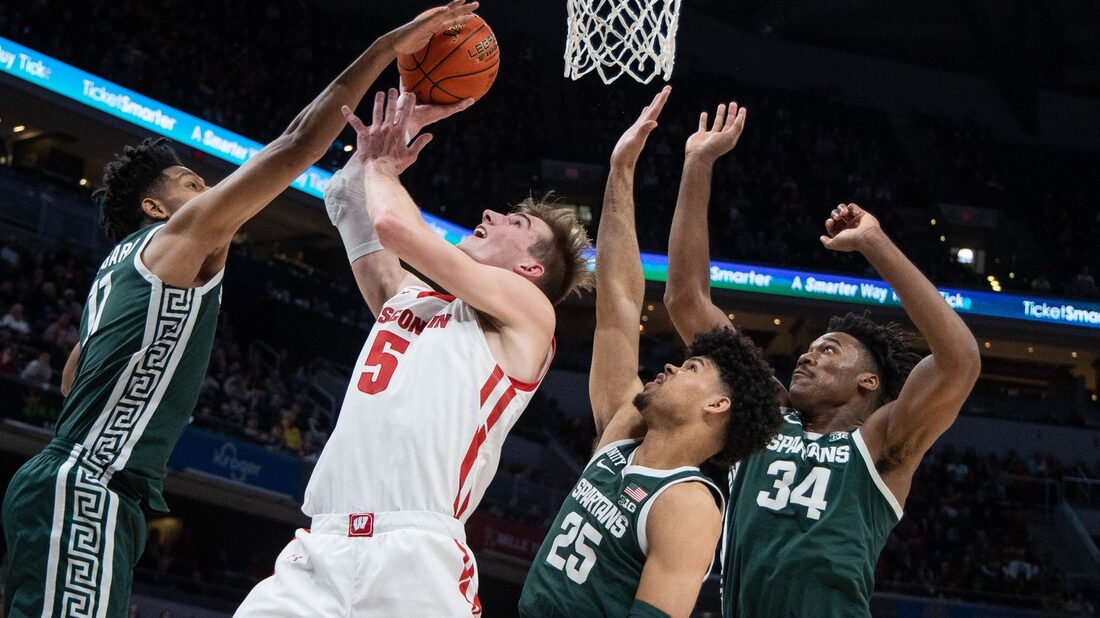 Tyson Walker scored nine of his 11 points down the stretch to pace Michigan State to a 69-63 victory over 12th-ranked Wisconsin in the quarterfinals of the Big Ten tournament at Indianapolis.

The Spartans (22-11), seeded seventh in the tourney, will face the winner of Purdue (25-6), ranked ninth in the country, and Penn State (14-16) in Saturday’s semifinals. Those teams played later Friday night.

Wisconsin (24-7) lost consecutive games for the first time this season. The Badgers dropped to the #2 seed and missed a chance for the outright regular-season title with a 74-73 loss at home to Nebraska in the last game.

Walker, scoreless in the first half, hit consecutive jumpers to put the Spartans up 62-58 with just under a minute remaining. Chucky Hepburn hit a 3-pointer to pull Wisconsin within 65-63 with 16 seconds left, but Walker closed it out with four consecutive free throws.

Marcus Bingham Jr. had 19 points and 11 rebounds for Michigan State, which had split with Wisconsin during the regular season.

Brad Davison scored 23 points and Hepburn and Johnny Davis had 11 each.

Davis, the Badgers’ leading scorer and rebounder, was questionable after being injured on a flagrant foul against Nebraska. He made just 3 of 19 shots and missed all five 3-point attempts.

Bingham scored all of Michigan State’s points during an 11-2 run, putting the Spartans up 47-42 with a layup.

After a layup by Wisconsin’s Steven Crowl, Joey Hauser connected on the Spartans first 3-pointer after 10 misses, and then added a jumper to make it 52-44 with 6:47 left.

Wisconsin had taken its first lead at 32-30, erasing a four-point deficit on a 3-pointer by Steven Crowl, the first of the game by either team after a combined 13 misses, and a three-point play by Davis.

Wisconsin also was just 12 of 21 from the free-throw line. Michigan State, which struggled with turnovers in the final minutes of its 76-72 victory over Maryland on Thursday, had just seven turnovers against the Badgers.

Michigan State managed a 24-22 lead after a lackluster first half in which each team managed just seven field goals and were a combined 0 for 11 from beyond the arc.

The Spartans took their biggest lead of the half at 14-6 as Wisconsin hit just three of its first 16 shots. Davis made just 1 of 10 shots before the break and missed all three of his 3-point attempts.