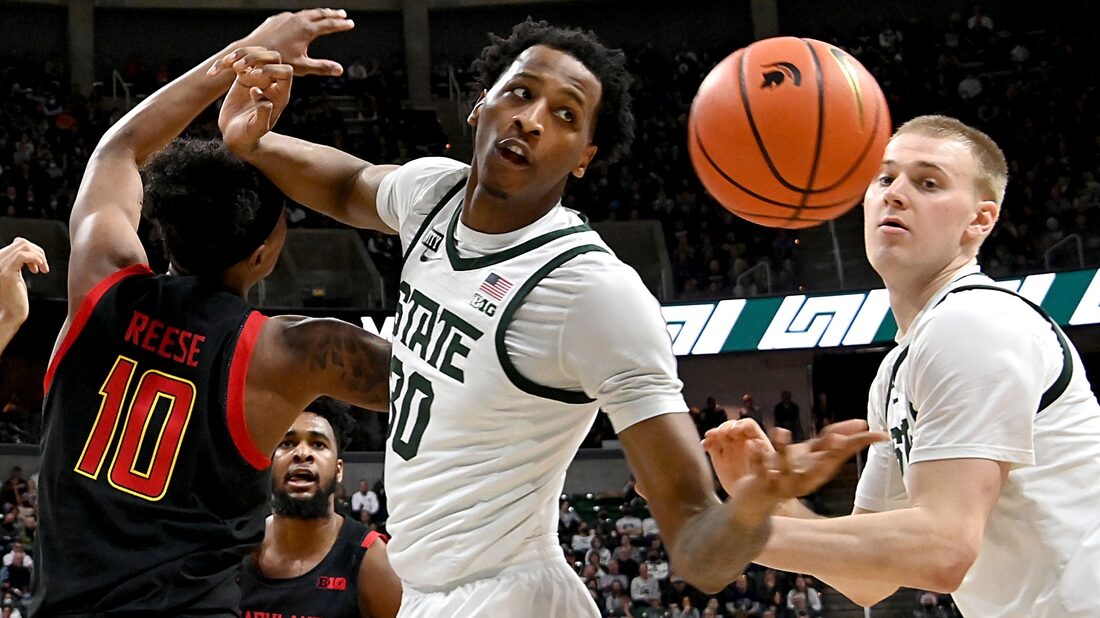 Michigan State scored the first 14 points of the game and never trailed while defeating Maryland 77-67 in East Lansing, Mich. on Sunday.

Malik Hall led with 17 points and Tyson Walker had 13 points and five assists for the Spartans (20-11, 11-9 Big Ten) in the regular-season finale for both teams. Marcus Bingham had 12 points and 11 rebounds, Gabe Brown added 10 points and Julius Marble chipped in eight.

Bingham and Marble combined for 20 first-half points as the Spartans jumped to a 46-26 halftime lead. Maryland shot 28.1 percent from the field while Michigan State made 53.1 percent of its attempts.

A dunk by Bingham eight seconds into the game energized Michigan State and its crowd. Brown had a conventional three-point play before Bingham knocked down a pair of 3-point attempts. Marble finished off the 14-0 start with a basket.

Maryland finally got on the board with one Hakim Hart free throw. The Spartans soon upped their lead to 18-1.

The Terrapins didn’t make their first field goal until Hart’s layup with 11:01 left in the half. A three-point play by Max Christie with 5:47 left in the half upped the Spartans’ advantage to 20, 33-13. The lead fluctuated between 16 and 22 points the remainder of the half.

Ayala sparked a 10-0 Maryland outburst to start the second half with a pair of 3-pointers. Michigan State answered with a 10-0 run of its own, including 3-pointers from Joey Hauser and Walker.

The Terrapins weren’t through with their double-digit runs. They had a 12-0 sprint midway through the half to make it 59-51. Ayala hit two more 3-pointers and Maryland’s next two baskets were layups off Spartans turnovers.

Maryland never got closer than eight the rest of the way.