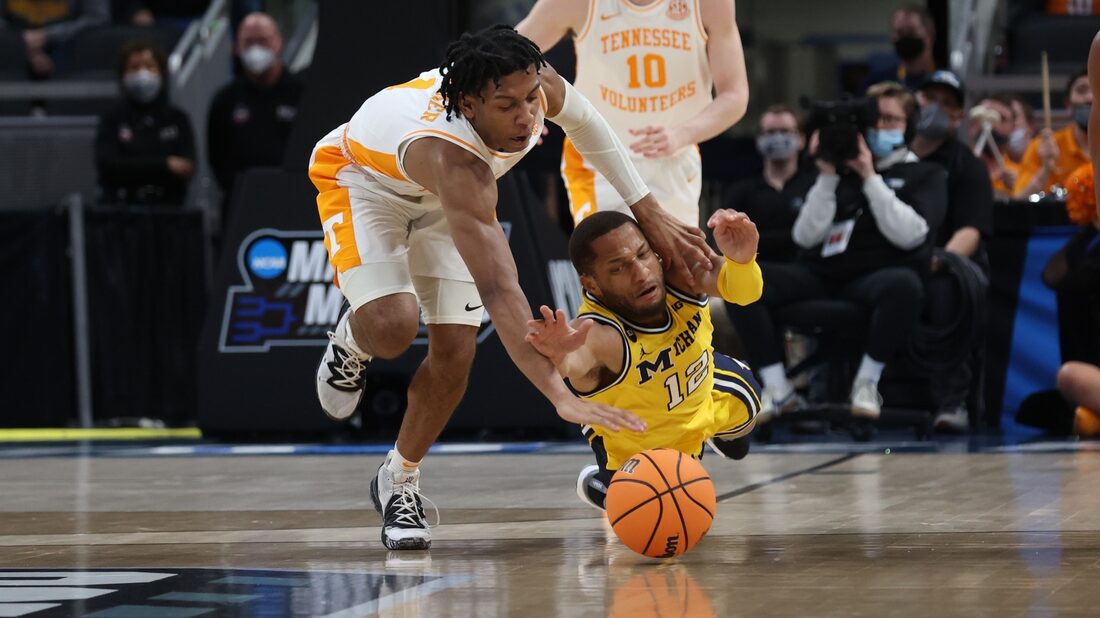 INDIANAPOLIS — Michigan is headed back to the Sweet 16.

The #11 seed Wolverines upset Tennessee, 76-68, bouncing the #3 seed in the South Region on Thursday in Indianapolis to set up a meeting with the winner of #2 Villanova and #7 Ohio State (Sunday, 2:40 p.m. ET).

Tennessee (27-8) was led by point guard Kennedy Chandler’s 19 points and nine assists. Josiah-Jordan James added 13 but was 5 of 13 from the field and 0 for 6 from 3-point range. Tennessee was 2 of 18 from beyond the arc.

John Fulkerson was fouled on an offensive rebound with 25 seconds left that he put in on the move and cut Tennessee’s deficit to 72-68. But the Vols’ forward missed the free throw and Michigan’s celebration began.

The Wolverines spoiled a chance to seal the game with a 68-64 lead. They exited a timeout with their 15th turnover and lefty Santiago Vescovi curled in a one-hander to cut the Michigan edge to two points.

But Brooks connected on a running hook shot and Tennessee missed what was their 14th failed 3 of the game at that point. Michigan rebounded and put Brooks back on the line. He pushed the lead to six.

Brooks launched an underhand layup as he collided with James on the right-hand block. As James crashed to the deck, the ball dropped for the 12th lead change in the game. and Brooks was sent to the line for the and-1 chance following the under-4 media timeout. He converted and Michigan led 65-62 with 3:21 to go.

Michigan is back in the Sweet 16 for the second season in a row under head coach Juwan Howard. The Wolverines reached the Elite Eight last season before falling to UCLA.

Williams followed a Brooks miss to tie the game at 60 and Zakai Zeigler’s steal and untested finish pushed Tennessee back on top. But Williams was there to clean up Dickinson’s miss again on the other end to pull Michigan even with four minutes left.

Dickinson topped 20 points for the 17th time this season.

Tennessee closed the first half with a 13-2 run for a 37-32 advantage as Michigan turned it over on three consecutive possessions.