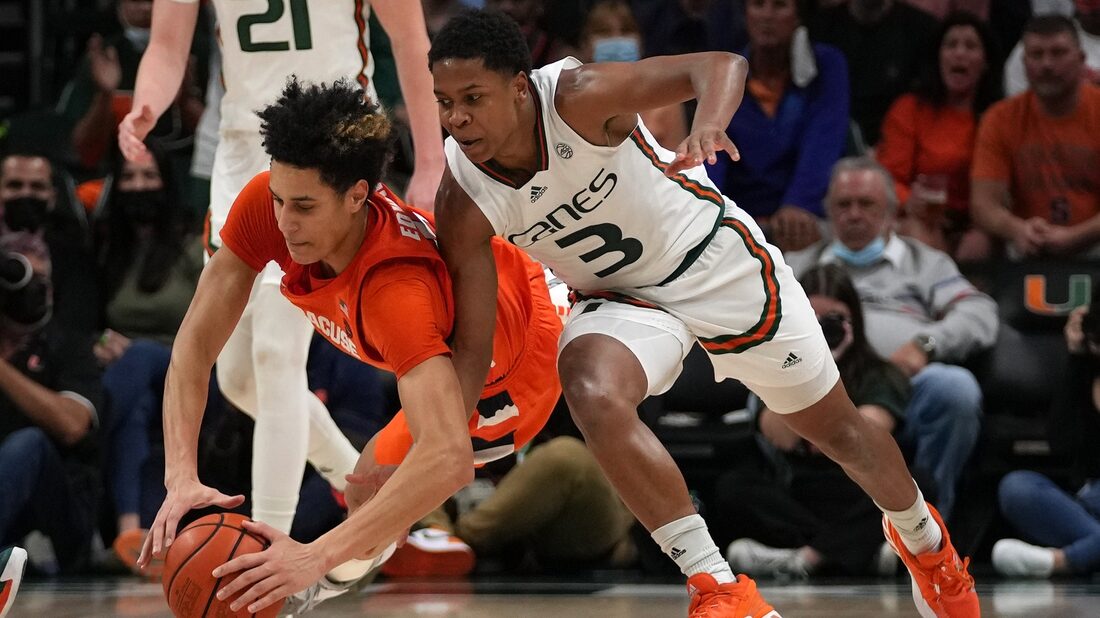 The Miami Hurricanes, whose 9-2 road record is the envy of almost every team in the nation, visit Syracuse for an Atlantic Coast Conference contest on Saturday afternoon.

Miami freshman guard Wooga Poplar was asked how the teams has been so successful on the road.

“Keeping composed, not taking teams for granted, being humble and taking games one by one,” he said.

Miami escaped with an 88-87 home win over Syracuse in their previous meeting on Jan. 5. The Hurricanes trailed that game by 18 points in the first half, but they rallied behind guard Charlie Moore’s 25 points and six assists. He made 6 of 10 shots from 3-point range and Miami also got 19 points from Kameron McGusty and 14 from Isaiah Wong.

The Hurricanes have thrived this year by forcing turnovers, and they did it to Syracuse, too. Miami forced 19 miscues — a season high for Syracuse at the time — and the Hurricanes turned that into 25 points.

McGusty ranks fourth in the ACC in scoring (17.4). Wong, who is coming off a season-high 27-point game against Boston College on Wednesday, ranks 12th in the league at 15.5.

Syracuse, which is 11-4 at home this season, is led by Buddy Boeheim, who ranks second in the ACC in scoring (19.0). His brother, Jimmy Boeheim, averages 13.3 points per game.

Their father is legendary Syracuse coach Jim Boeheim, who confirmed this week he will return next season.

Boeheim, 77, said there is a plan in place to eventually replace him as coach, although it’s unspecified.

The main thing, he said, is to keep his word to his recruits.

“If I (retired) now, after giving my word to those players, it would look like I’m quitting because we’re having a bad year,” Boeheim said.

Besides the Boeheims, the Orange are led by Cole Swider (13.7 scoring average) and Joseph Girard III (13.3).

In that loss to Miami earlier this season, Syracuse got 26 points from Girard, 22 from Jesse Edwards and 20 from Swider. But the Boeheims were held down in scoring — nine for Buddy and seven for Jimmy on 2-for-14 combined shooting.

In this article:cbb-mia, miami, ncaab, syracuse