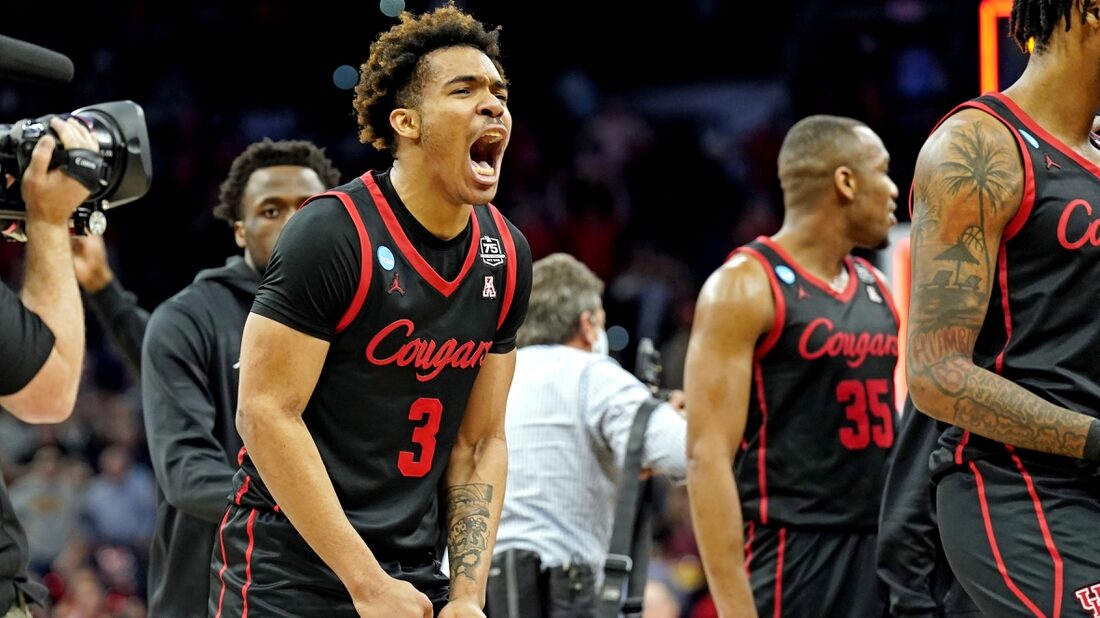 Possessions will be at a premium with defense front and center Saturday in San Antonio when #2 seed Villanova squares off against gritty fifth-seeded Houston in the NCAA Tournament South Region final.

This one will not be for the weak of heart. The survivor advances to the Final Four to face Duke or Arkansas in New Orleans on April 2.

Houston opened as a 1.5-point favorite at BetMGM but the line moved to 2.5 by Saturday with 55 percent of the spread bets and 62 percent of the handle backing the Cougars. However, Villanova’s +105 moneyline has drawn 69 percent of the total bets.

Villanova (29-7) fought past #11 seed Michigan 63-55 Thursday to reach the Elite Eight for the third time in the past six tournaments, and the fifth time in 21 seasons under coach Jay Wright. The Wildcats won national championships in 2016 and 2018.

The Wildcats advanced behind 22 points from Jermaine Samuels and a knack for making shots and stops when they were needed most. Justin Moore scored 15 points and Collin Gillespie hit four 3-pointers to account for 12.

Samuels, who also drew the defensive assignment on Michigan star Hunter Dickinson, is likely to be spending most of his time in preparation for Houston in the ice bath rather than the sunny, warm weather in Texas.

“It’s all about, first and foremost, taking care of our bodies, hydrating, getting the proper sleep,” Samuels said. “Then just doing whatever we can to keep our bodies in check — whatever it takes to make sure we’re ready to play and play at our full potential.”

Gillespie banged his knee in the final minute of the game and was in the trainer’s room instead of at the postgame press conference afterward.

Houston (32-5) moved into the Elite Eight with an impressive 72-60 win over top-seeded Arizona in Thursday’s late game in San Antonio. The Cougars never trailed and pulled away late as Jamal Shead poured in 21 points and Kyler Edwards added 19, including a decisive 3-pointer down the stretch.

The Cougars, in their eighth season under Kelvin Sampson, are fighting for their second straight Final Four berth. Previously, they played in three consecutive Final Fours from 1982 to 1984.

The Cougars counterpunched on every Arizona jab in the second half. The Wildcats twice clawed to within a bucket of the lead, but Houston responded each time while holding Arizona to 33.3 percent shooting for the game.

Josh Carlton scored 10 points on 5-of-6 shooting and had a game-high seven rebounds as the Cougars held a 26-18 edge in points in the paint.

“We’re always feeling like we’re the toughest team out there,” Shead said. “Our energy was electric.”

Houston dominated Arizona despite getting only seven points from starters Fabian White Jr. (four) and Taze Moore (three) — well under their combined average of 23 points a game. Moore had 21 in the second-round victory over Illinois but played only 17 minutes (foul trouble) against Arizona.

“We led our league in scoring –we’re the #10 offensive team in the country efficiency-wise. So, it’s not like we don’t have a good offense. (This team) is not afraid of anybody.”

That type of defense has led to a low 127.5 point total for the Over/Under at BetMGM. The Over is being backed by 64 percent of the bets and 66 percent of the handle.