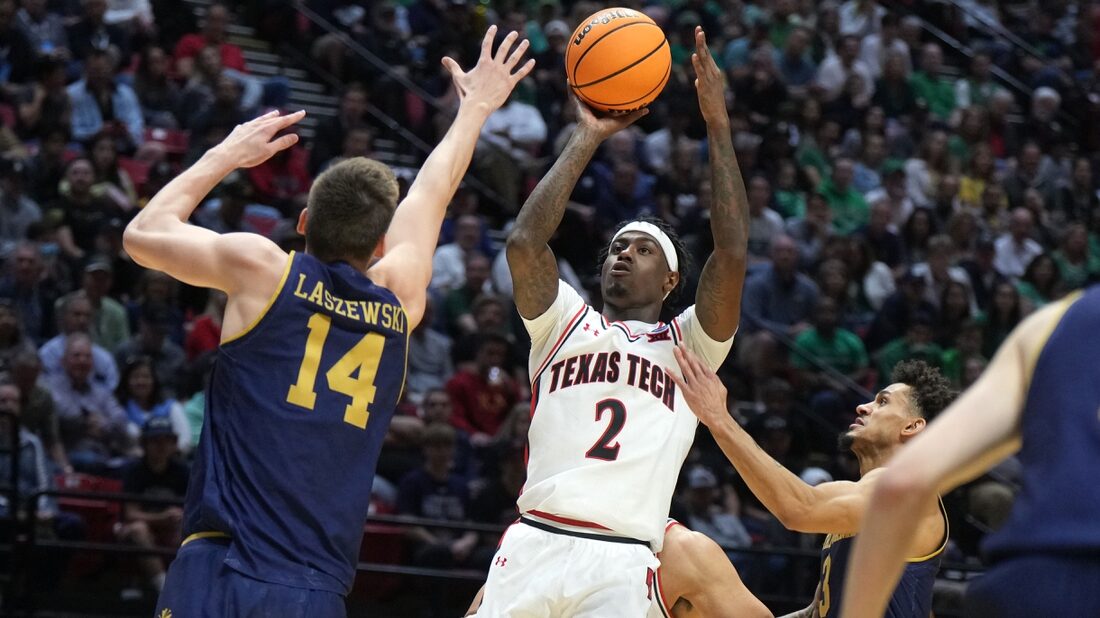 Kevin Obanor racked up 15 points and 15 rebounds and third-seeded Texas Tech made all 10 of its free throws over the final two minutes to rally for a 59-53 win over 11th-seeded Notre Dame on Sunday in a rugged NCAA Tournament West Regional second-round game in San Diego.

The Red Raiders (27-9) advanced to the Sweet 16, where they will face second-seeded Duke, an 85-76 winner over Michigan State in the second round on Sunday, in the West Regional semifinal in San Francisco. This is Texas Tech’s third trip to the Round of 16 in the last four NCAA Tournaments.

Four points by Kevin McCullar after two blocked shots by the Red Raiders clinched the win for Texas Tech, which had missed 10 straight field goals before McCullar’s breakaway dunk.

“I’m not sure still how we won the game,” Red Raiders coach Mark Adams said. “We made some big defensive stops down the stretch and Kevin made some free throws that were huge. I’m just so happy our guys get to play another game.”

McCullar and Bryson Williams added 14 points each for Texas Tech.

Dane Goodwin led Notre Dame (24-11) with 14 points while Wesley had 11 for the Fighting Irish.

The Red Raiders forged a 7-0 run, capped by a dunk by Santos-Silva at the 11:12 mark, to assume to an early 13-7 lead. Notre Dame answered and tied the game at 13 and then again at 17 before going in front again on Paul Atkinson Jr.’s free throws with 5:30 left in the half.

Texas Tech scored nine of the ensuing 11 points to move in front at 26-20 with 1:37 remaining before halftime. Cormac Ryan’s 3-pointer and then a putback by Wesley at the buzzer cut the Fighting Irish’s deficit to 26-25 at the break.

Obanor, with 11 points, was the only player in double-figure scoring in the first half. Wesley led Notre Dame with six first-half points on 1-of-9 shooting.