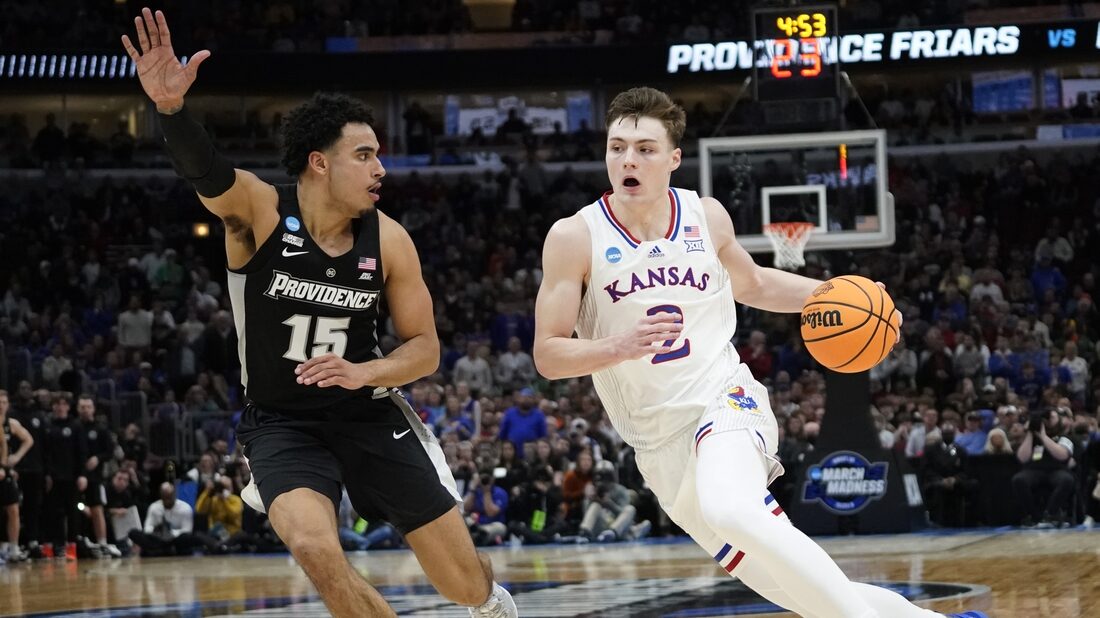 CHICAGO — The top-seeded Kansas Jayhawks on Friday became the winningest team in college basketball and now stand one victory from advancing to their first Final Four since 2018.

The 10th-seeded Miami Hurricanes need a win to continue a historic run that has vaulted the program to its first-ever Elite Eight appearance.

Something has to give when the schools meet Sunday in the NCAA Tournament Midwest regional championship that pits blue blood against an orange-and-green flood of quickness and defense.

Kansas (31-6) hounded fourth-seeded Providence into 33.8 percent shooting en route to Friday’s 66-61 semifinal victory, including a 4-for-23 effort from 3-point range.

Although the Jayhawks shot just 39.3 percent from the floor, they prevailed behind disciplined defense and were plus-five in the rebounding column. Offensively, resurgent point guard Remy Martin had a game-high 23 points to lead the Jayhawks in scoring for the third time in as many NCAA Tournament games while Jalen Wilson contributed 16 points and 11 rebounds.

Ochai Agbaji, a Naismith Player of the Year finalist, had five points on 2-for-8 shooting, by far his lowest output of the tournament, but Jayhawks coach Bill Self indicated the team isn’t panicking. Agbaji had four blocks, four boards and two steals while helping to steady the defense.

“We can look at it as a shooting slump, and I guess it is,” Self said. “But when you only take eight shots, I don’t know if I ever consider that a slump. I know one thing: The lid will come off eventually. And when it does, it will be good for KU people.

“But right now, I think he’s doing enough stuff to help us win, and we’ve had other guys step up. So, we don’t put too much emphasis on that at all.”

Miami (26-10) keeps clicking behind a dazzling and deep array of guards.

On Friday, starters Charlie Moore and Isaiah Wong were held scoreless in the first half against 11th-seeded Iowa State, but guards Kameron McGusty and Jordan Miller collaborated with forward Sam Waardenburg to score each of the team’s 32 points as the Hurricanes took a three-point edge to intermission.

McGusty finished with a game-high 27 points, Moore had 16 and Waardenburg posted 13 points, eight rebounds, five assists and three blocks to help the Hurricanes pull away for a 70-56 victory.

“If you told me before the game that Charlie and Zai got shut out in the first half, I’d say, ‘How many are we down?'” Hurricanes coach Jim Larranaga said. “But because our defense has been so resilient, because we’ve made it so difficult for the opponent to score easily, (we adjusted).”

With that, Miami players hope their fans — not to mention sports fans nationwide — can grow more accustomed to seeing the Hurricanes have success on the hardwood.

“I look at it as a new foundation for our basketball program,” McGusty said. “I mean, for now, hopefully we can go as far as we can, playing into next week. But from now on, that’s going to be the new goal, get to the Elite Eight or Final Four to beat the 2022 team’s record. This is a huge milestone. Like I’ve said, we’re traditionally known as a football school. To be able to do this, not only for the school, for the coaches, for ourselves, but just for the city, as well.”

Sensing their opponent’s urgency as well as their own, the Jayhawks will aim to stay centered.

“We just have to remain calm and continue to play our game,” Wilson said, “just know we can’t get too high or low.”