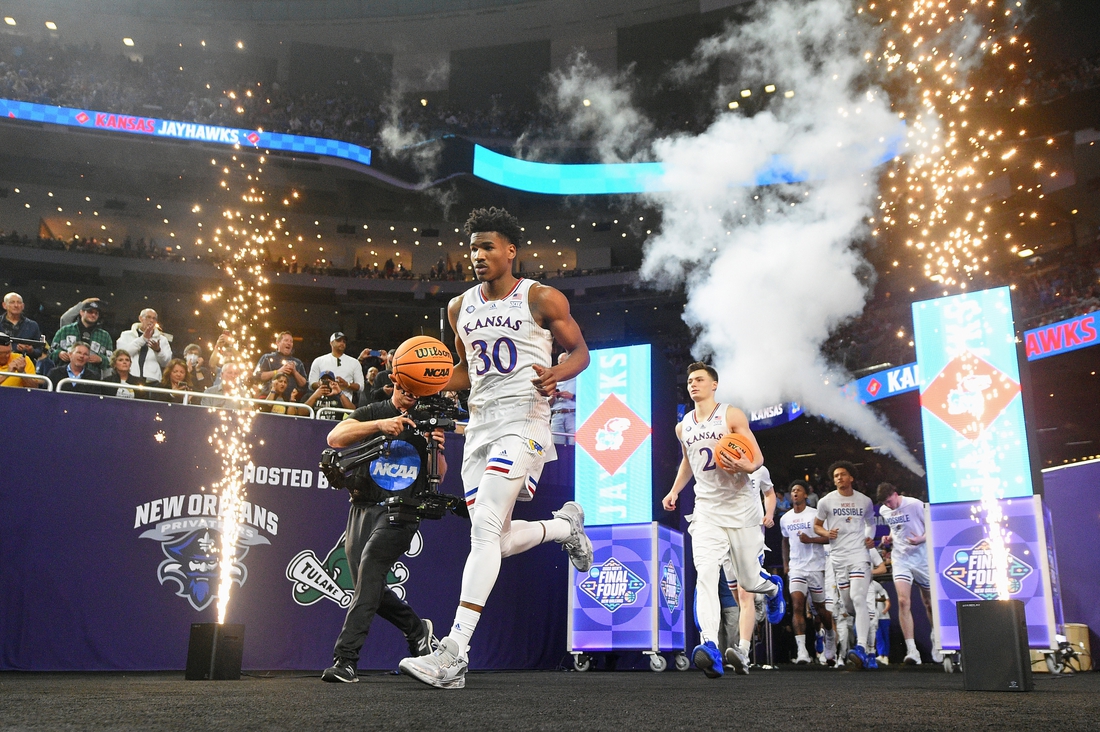 NEW ORLEANS — Ochai Agbaji scored 21 points and shot the lights out in the Superdome to send Kansas to the national championship game with an 81-65 victory over Villanova on Saturday.

David McCormack had a season-high 25 points and collected nine rebounds and All-American Agbaji played a supporting role with six 3-pointers, tied for third-most in a single Final Four game with a host of others. Agbaji didn’t miss his first shot until his seventh try from long distance 30 minutes into the game.

McCormack made 10 of 12 field-goal attempts and helped Kansas strangle the Wildcats with 32 points in the paint.

But there was no easy answer for Jay Wright and Villanova (30-8) against McCormack. Clogging the lane kept the Jayhawks open from 3-point range, and KU drilled 13 of 24 attempts.

Christian Braun splashed a pair of 3s 90 seconds apart to separate Kansas from Villanova by 16 points and punctuate a stellar perimeter shooting display with 2:32 left before a parade of free throws began.

Collin Gillespie led Villanova with 17 points, including 5 of 8 shooting from 3-point range. Brandon Slater chipped in 16 with four treys.

Approaching the under-4 media timeout and with the shot clock at 1, Braun hit all net on the left wing for a 3 that stretched Kansas’ lead back to double-digits at 71-59. Agbaji blocked Jermaine Samuels’ attempted answer at the other end and was fouled at the other end to send the Jayhawks into celebration mode.

Samuels converted a three-point play with 6:10 remaining, powering through Agbaji’s grasp, but Kansas got the answer on the other end with a lefty hook by McCormack to push the Jayhawks’ lead to 66-58.

Eric Dixon dropped in two free throws with 9:08 to go, trimming the Villanova deficit to 62-55. But after a stop, McCormack got easily gained position on Dixon and drew a foul. He bounced in both free throws and the KU lead was again nine.

The poster-worthy play of the game occurred at the 10:52 mark in the second half.

McCormack’s authoritative right-hand slam over the outstretched right arm and head of Samuels at the 10:52 mark gave the big man 19 points.

Villanova’s timeout permitted McCormack a moment in the spotlight of a game he’d helped dominate from the opening tip.

Kansas had seven 3-pointers in the first half and made its first two in the second to put Villanova in a 50-36 hole at the under-16 timeout.

Kansas held a comfortable advantage for the most of the first half and led 40-29 at halftime with Villanova scrapping to stay in it with 13 second-chance points.

With 10 missed 3-point tries in the first half, needed life came from Gillespie on Villanova’s third shot of its possession as the clock ticked toward the final minute.

He rattled in a 3 from the right wing in front of the Kansas bench. That cut the KU lead to single digits – 38-29 — for the first time since the 11:19 mark of the opening half.

Kansas will make its third national championship game appearance under Self and first since 2012. Jayhawks have 33 wins for the first time since 2015-16.