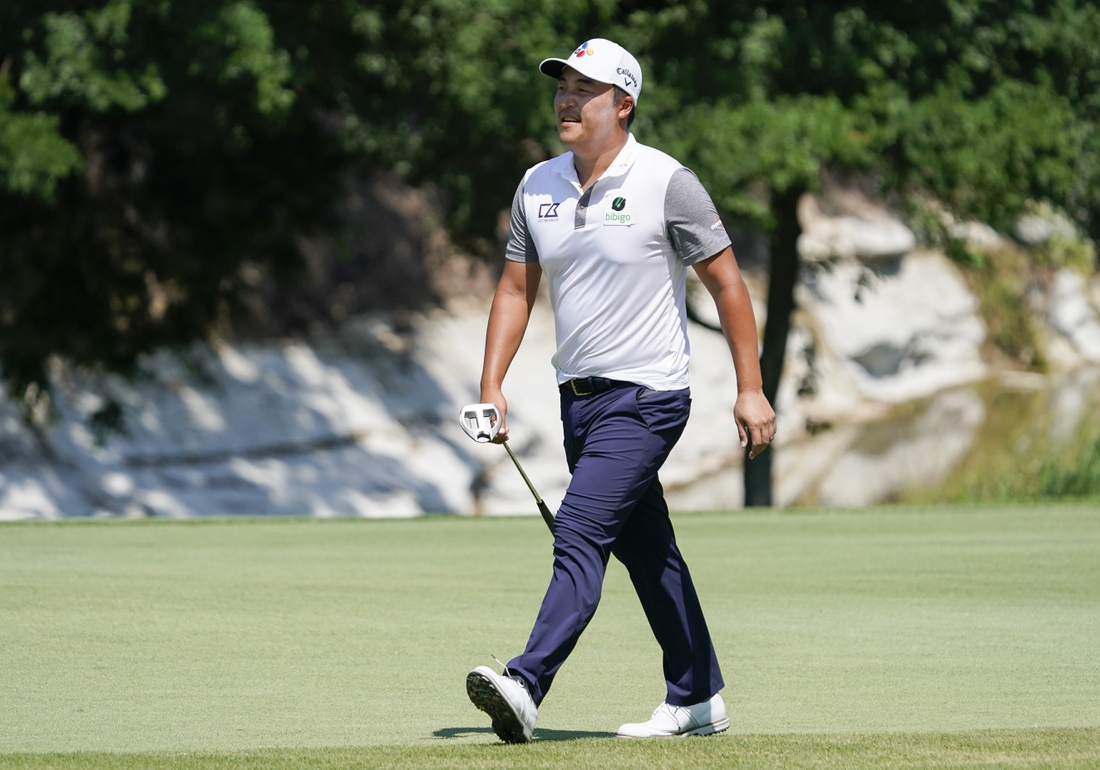 K.H. Lee of South Korea shot a final-round, 9-under 63 to successfully defend his title at the AT&T Byron Nelson on Sunday in McKinney, Texas.

After earning his maiden PGA Tour title at the Dallas-area event last year, Lee picked up his second career win at TPC Craig Ranch with a 26-under 262, one stroke better than hometown favorite Jordan Spieth.

Lee began the day four shots off the lead, but he made five birdies on the front nine and jumped into the lead at 24 under with an eagle 3 at the par-5 12th. His second shot nestled up inside 5 feet of the cup.

He stayed ahead the rest of the way, adding birdies at Nos. 13 and 18.

Lee’s wife was pregnant when he won the 2021 Byron Nelson. This time, his baby daughter could be part of the celebration.

“It’s like a dream again, like last year,” Lee said. “And then with my family and my wife, and also my daughter, it’s an amazing feeling.”

Spieth, playing in the final group after starting the day one shot off the pace, needed to eagle the par-5 18th to force a playoff. His chip from between a bunker and the fringe missed by just 2 feet.

Despite the near-win, it marked Spieth’s best finish at his hometown event.

“I hit just a shot that you don’t practice into the green and I actually thought I just stuck it and I don’t know if I could have a thousand balls and hit it where I hit it,” Spieth said of his 18th-hole chip event. “But I still had a chance. K.H. made a great par save on 17 and then went and hit the green in two on 18 and two-putted. … I think when the day started I would have wanted to be at — I think I would have wanted to be at 25-under standing on 18 tee.

“So I had a chance to do that with that putt on 17 and just kind of, it was just pumping into and it just dove across the hole. But it was a good week, good momentum into next week, last two starts being a win and a second, but this one will sting just a little bit just looking back on the day.”

Hideki Matsuyama of Japan fired a 62 to move into a tie for third at 24 under with Sebastian Munoz of Colombia. Munoz, who opened the tournament with a 60, shot 69 Sunday.

Earlier in the day, Xander Schauffele also took a run at 59 and settled for an 11-under 61 for the low round of the day. After opening with four pars, Schauffele had an eagle and three birdies between holes 5 and 9 and rang up six more birdies on the back nine.

That set the early clubhouse lead at 23 under. At the end of the day, it was good for a tie for fifth with Ryan Palmer (66) and Justin Thomas (67).

“I finally putted better, made some putts,” Schauffele said. “Through the first two, three rounds, I was a negative there. … It took a few days to acclimate to the surfaces, and finally saw some putts go in, which was nice.”

Charl Schwartzel of South Africa shot a 67 to take sole possession of eighth place at 22 under.

Marc Leishman of Australia aced the par-3 15th as part of a 5-under stretch over four holes. He shot a 67 but was not in contention — tying for 51st at 13 under.

The Byron Nelson was the final tune-up available for PGA Tour players ahead of next week’s PGA Championship, the second major on the calendar, at Southern Hills Country Club in Tulsa, Okla.

On that note, Lee is looking to make amends at next week’s major.

“Last year I missed the cut at the PGA Championship,” Lee said. “So my first goal is next week play well, hopefully make the cut.”