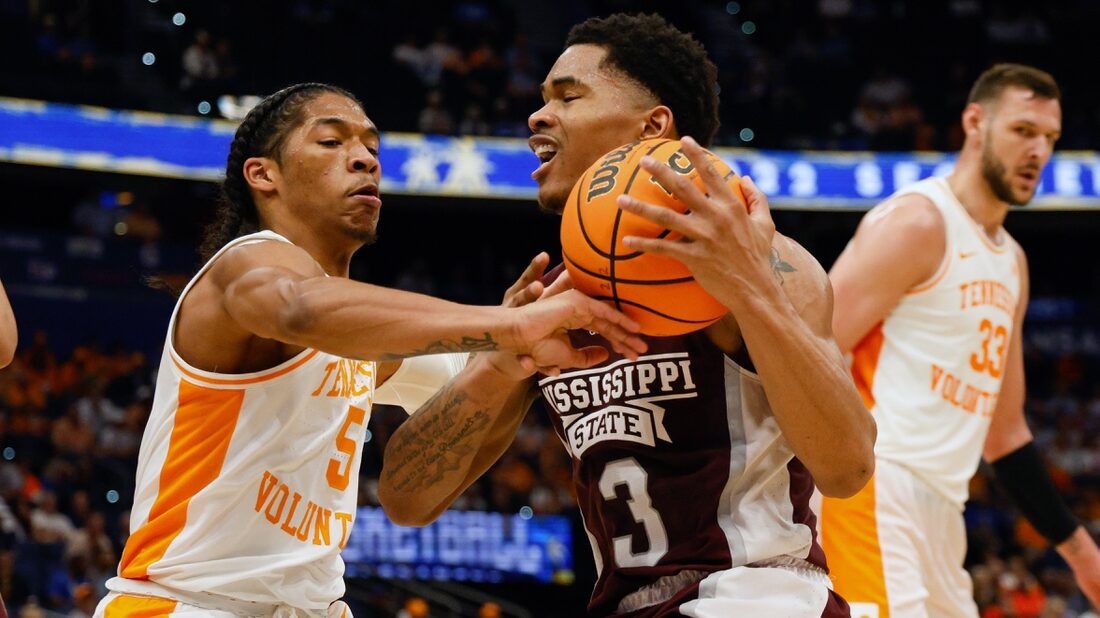 Josiah-Jordan James scored 14 of his 16 points during an early second-half surge that carried #9 Tennessee to a 72-59 win over Mississippi State on Friday in a Southeastern Conference tournament quarterfinal game in Tampa.

Zakai Zeigler and Kennedy Chandler, who twice left the game with a right ankle injury but returned, added 11 points each and Brandon Huntley-Hatfield and Santiago Vescovi scored 10 each for Tennessee, which won for the 10th time in 11 games.

Shakeel Moore scored 15 points, Tolu Smith added 14, D.J. Jeffries had 12 and Iverson Molinar 10 to lead Mississippi State (18-15), which had upset seventh-seeded South Carolina 73-51 in the second round on Thursday.

The Bulldogs’ defense, which was key to the victory over the Gamecocks in the second half, couldn’t slow down James and his teammates.

The Volunteers needed less than seven minutes of the second half to surpass South Carolina’s second-half point total (22) and open a 12-point lead.

Tennessee was up just 39-37 at halftime, but James started the second-half scoring with back-to-back 3-pointers to give the Volunteers an eight-point lead.

Moore answered with a 3-pointer for the Bulldogs, but James made two more treys to push the lead to 51-40.

Smith hit 3 of 4 free throws on consecutive possessions, but Tennessee soon extended the lead to 57-45 on a jumper by James.

Molinar scored the first points of the game on a layup that gave the Bulldogs their only lead.

The Volunteers led by as many as eight points three times before the break and the score was tied five times.

Chandler broke the final tie of the half by making two free throws with 54 seconds left to give Tennessee a two-point halftime edge.

In this article:cbb-tenn, mississippi state, ncaab