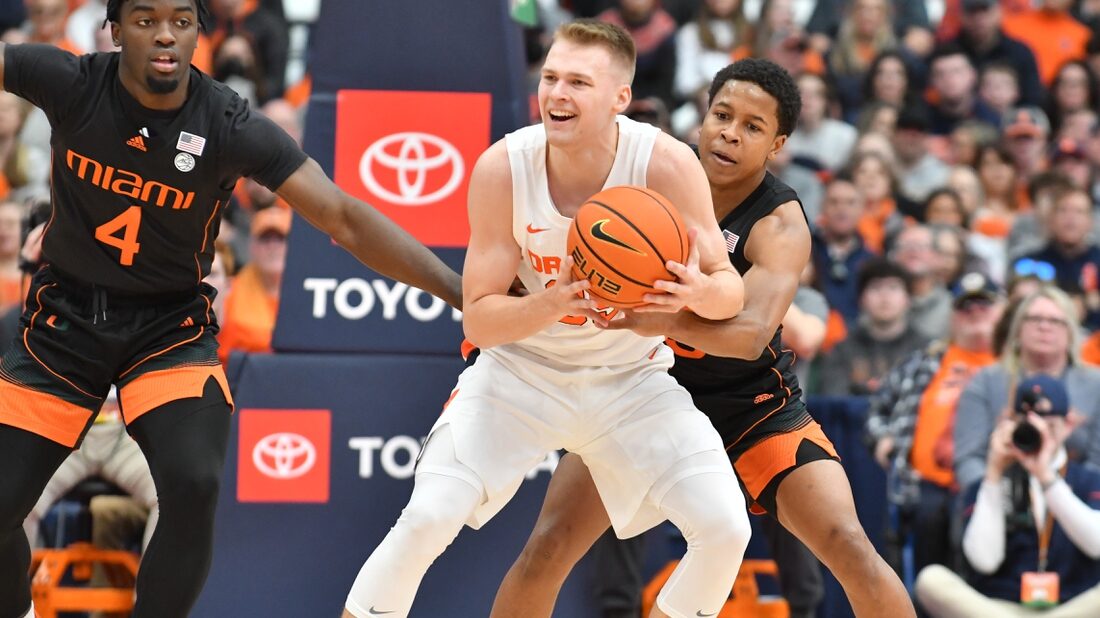 Jordan Miller made a go-ahead tip-in with 13 seconds left as Miami overcame an 18-point deficit to post a 75-72 win over host Syracuse on Saturday.

Syracuse led by seven points with 70 seconds remaining before the bottom fell out.

Kameron McGusty made a pair of jumpers and Miller added a pair of buckets, including a tip-in to give Miami a 73-72 lead. Miller grabbed the rebound and made two free throws after he was fouled with 3.9 seconds left.

On Syracuse’s final possession, Jimmy Boeheim was short on a 3-pointer that would have sent the game to overtime.

The Orange, who fell to 11-5 at home this season, also got 17 points from Girard and 14 from Jimmy Boeheim.

Syracuse led 37-26 at halftime, thanks to 6-for-12 shooting on 3-pointers and an 8-2 edge on second-chance points. Miami made just 1-for-11 on 3-pointers, and the Hurricanes gave up an 11-1 run midway through the first half.

Buddy Boeheim led all first-half scorers with 18 points on 5-for-10 shooting, including 3-for-6 on 3-pointers.

In the second half, Syracuse extended its lead to 18 points, but a 13-0 Miami run cut the Hurricanes’ deficit to 44-39 on Charlie Moore’s layup with 14:11 left. Moore had three layups during that run.

In the final minute, Miami got two jumpers in the lane from McGusty, two Miller tip-ins and the two Miller free throws.

In this article:cbb-mia, miami, ncaab, syracuse