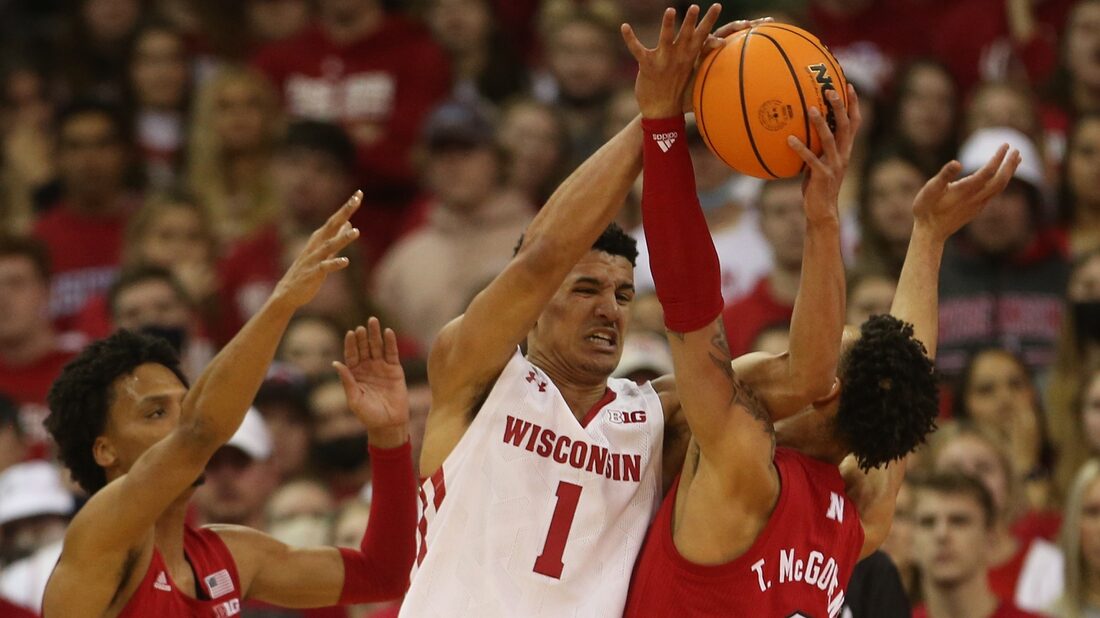 Wisconsin’s Johnny Davis, the unanimous Big Ten Player of the Year, hopes to shake off an ankle injury when the 12th-ranked Badgers open postseason play Friday with a Big Ten tournament quarterfinal matchup against Michigan State in Indianapolis.

In the regular-season finale on Sunday, Davis went down in a heap under the Wisconsin basket, with a Nebraska player landing on top of him. On a blur of a fastbreak, Davis had hurt his ankle and sustained a smack to the head, drawing a flagrant foul.

As teammates helped Davis off the floor and to the bench, his day complete, the season no doubt flashed before the eyes of Badgers fans as they considered a postseason without their top scorer (20 points per game) and rebounder (8.1 per game).

But two days later, Davis allayed those fears, pronouncing himself good to go for the Big Ten tournament. After a double bye to the quarterfinals and valuable rest for Davis’ ankle sprain, second-seeded Wisconsin (24-6) will take on seventh-seeded Michigan State (21-11).

Were it not for Davis’ injury, the Badgers might have been the top seed. On Sunday, they had a chance to clinch their first outright Big Ten title since 2015. However, with Davis limited by foul trouble in the first half and later knocked from the game, last-place Nebraska pulled off a 74-73 upset, allowing Illinois to grab a share of the title and the tournament’s top seed.

“I’m more frustrated with how we played versus the implications,” Wisconsin coach Greg Gard said. “We turned the ball over on seven of the first 18 possessions in the game. (It) gave them confidence.”

The Badgers’ defense gave up a season-worst 53.7 percent shooting against Nebraska. Wisconsin is 1-5 this season when allowing opponents to make at least half of their shots from the floor.

Michigan State doesn’t enter in top form either. After losing seven of the last 10 in the regular season, the Spartans nearly blew a 20-point, second-half lead on Thursday night before surviving with a 76-72 victory over 10th-seeded Maryland.

The Spartans had seven turnovers in the final 2:26 as they lost their composure against the Terrapins’ full-court pressure.

There were plenty of positives for the Spartans, however, as they made 50 percent of their shots from the floor and 9 of 19 (47.4 percent) from 3-point range. They also limited Maryland to 39.1 percent shooting.

Michigan State split the regular-season series with Wisconsin, winning at Madison 86-74 in January and losing 70-62 at home last month. In the second matchup, the Spartans had no answer for Davis (25 points on 8-of-11 shooting).