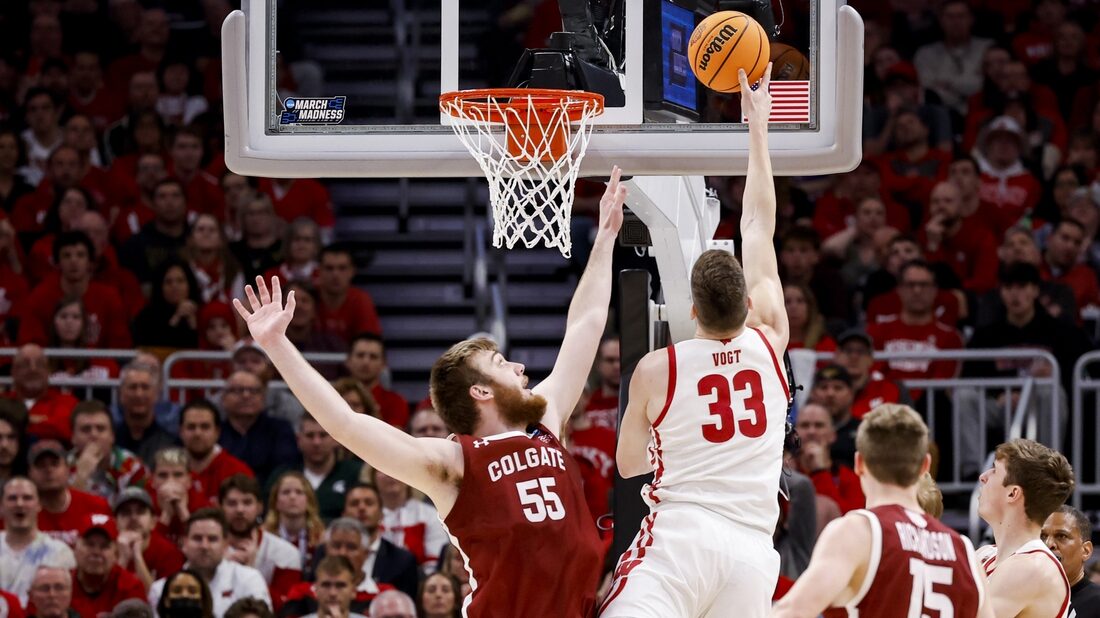 Johnny Davis scored Wisconsin’s final 14 points as the third-seeded Badgers survived a three-point barrage from #14 seed Colgate and held on for a 67-60 victory in the first round of the NCAA Midwest Region on Friday at Milwaukee.

The Badgers withstood a second-half 3-point barrage by the hot-shooting Raiders and then rallied with a 10-point run. Davis’ breakaway jam put Wisconsin up 58-52 with 3:56 left as Colgate went scoreless for more than seven minutes.

Said Wisconsin coach Greg Gard of the win: “I thought defensively, the middle part of the second half on, we got really good. Obviously made plays when we needed to. Took care of the ball, which was huge, so we could score in the paint.

“And then able to get them off the 3-point line and do a better job of covering up some of their looks. But a terrific win. Any win in this tournament’s obviously terrific, and look forward to moving on to Sunday,” Gard said.

Tyler Wahl added 15 points for Wisconsin, which was coming off consecutive losses for the first time this season.

The Badgers closed the regular season with a 74-73 home loss to Nebraska, costing them the outright conference title. They then lost to Michigan State 69-63 in the Big Ten tournament as Davis went 3 for 19 and missed all five 3-point attempts.

Wisconsin was playing just 80 miles from home. The last time the Badgers played in Milwaukee in the NCAA Tournament in 2014, they advanced to the Final Four.

Colgate hit 6 of its first 7 from beyond the arc in the second half, including four straight by Richardson.

Cummings curled in a reverse layup at the buzzer to pull Colgate even 28-28 at the half.

The Badgers made just 5 of their first 17 shots, but pulled even at 15-15 on a jumper and 3-pointer by Davis, who had missed his first four shots.