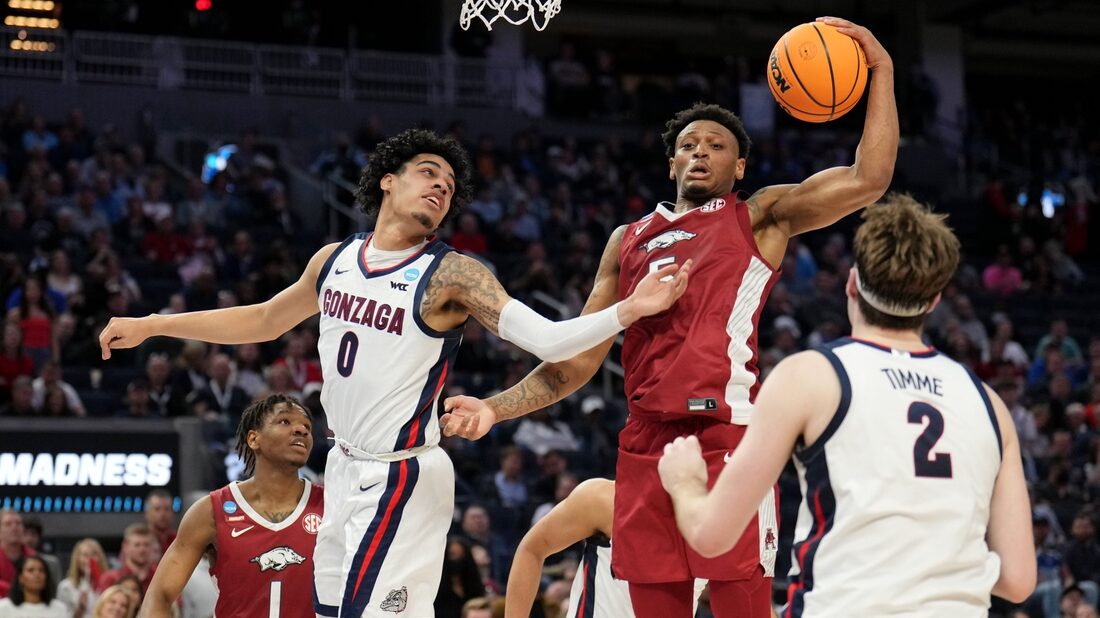 Jaylin Williams added 15 points and 12 rebounds and Trey Wade had 15 points and seven rebounds as the Razorbacks (28-8) advanced to the Elite Eight for the second straight season. Arkansas will face either second-seeded Duke or third-seeded Texas Tech in Saturday’s regional final.

Drew Timme registered 25 points and seven rebounds and Julian Strawther had 12 points for the Bulldogs (28-4), who played in the Sweet 16 for the seventh straight NCAA Tournament. Chet Holmgren contributed 11 points and 14 rebounds before fouling out with 3:29 left. All of Holmgren’s points came during the second half.

Gonzaga trailed by as many as nine in the second half but pulled within 66-62 on Andrew Nembhard’s two free throws with 1:27 remaining.

The Bulldogs didn’t score again until Nembhard made a 3-pointer to cut Arkansas’ lead to 68-65 with 16.5 seconds left. But Chris Lykes made two free throws with 15.8 seconds to play and Davonte Davis added two with 8.1 seconds left as the Razorbacks took a seven-point edge en route to closing it out.

Gonzaga shot just 37.5 percent from the field, including 5 of 21 from 3-point range. The Bulldogs committed 15 turnovers to the Razorbacks’ eight.

Arkansas connected on 40.3 percent of its shots and was 7 of 25 from behind the arc.

Notae knocked down a 3-pointer to give the Razorbacks a 43-38 advantage with 14:33 left in the game.

Holmgren scored back-to-back baskets to pull Gonzaga within one before Arkansas scored six of the next seven points to take a 49-43 lead on Williams’ basket with 10:15 left.

Holmgren picked up his fourth foul with 8:36 left when Au’Diese Toney converted a three-point play to again give the Razorbacks a six-point lead. Williams followed with a hoop 43 seconds later to boost the Arkansas lead to 54-46.

Holmgren returned to the game with 6:46 left and the Bulldogs down six. Eight seconds later, Notae drained a 3-pointer to give the Razorbacks a 59-50 lead.

Holmgren fouled out while contesting Notae, who split the two free throws to give Arkansas a 63-56 lead.

A short time later, Wade drilled a corner 3-pointer to give the Razorbacks a 66-58 advantage with 2:08 to play.

Notae scored 10 first-half points as the Razorbacks led 32-29 at the break.