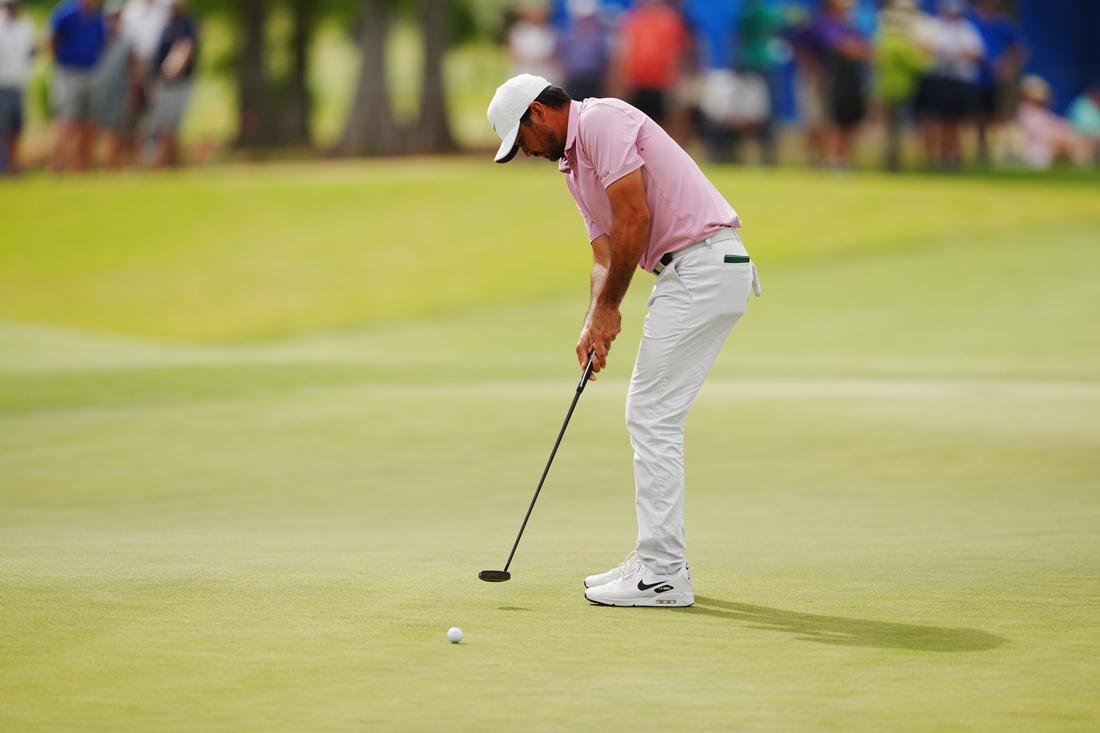 Australia’s Jason Day opened the Wells Fargo Championship with a 7-under-par 63 to take the first-round lead Thursday at Potomac, Md.

Day rang up eight birdies, five of them on the back nine, to establish a one-shot lead over Joel Dahmen. Five players were tied for third at 5-under 65: Matthew Wolff, Denny McCarthy, Englishmen Aaron Rai and Callum Tarren and France’s Paul Barjon.

Once the top-ranked player in the world, Day is down to #127 in the Official World Golf Ranking due in part to lingering injuries. He has not won on the PGA Tour since the 2018 Wells Fargo, his 12th career title.

That victory came at the tournament’s usual home of Quail Hollow in Charlotte, N.C. TPC Potomac at Avenel Farm is filling in for 2022, with Quail Hollow set to host the Presidents Cup in the fall.

“I don’t want to get ahead of myself because I know that it’s easy in the position I am right now, after a good round, to get ahead of myself and start talking where it could potentially go,” Day said. “But I think I’ve just got to stay as present as possible because if I can swing it the way I’m swinging it and have the short game and the touch that I have on the greens, I mean, I played some really good golf today.

“I feel like I can get back to where I need to be, but that’s a total decision up top in my head if I want to climb that mountain again.”

“I was surprised,” Dahmen said. “It’s a tough golf course, so I knew I was playing well and birdies were going early. But over 72 holes everyone’s going to get hot for a stretch. I happened to get hot on the front nine of the first round. Hopefully I can stay hot or get hot again somewhere along the way.”

McCarthy had a stellar round not far from his birthplace of Rockville, Md. He started on the back nine and birdied four of his first six holes.

“There’s been a lot of buildup to today’s first round and I was just excited to kind of get out here and get on the course in the morning,” McCarthy said. “It’s probably, there’s a little stress and tension leading up, but once I get on the golf course I feel really comfortable.”

A large group tied for eighth at 4-under 66 included Rickie Fowler. The longtime fan favorite has fallen to #146 in the world and hasn’t had a top-40 finish in his last eight starts, with five missed cuts in that span.

Fowler’s highlight shot came at the short par-4 14th hole, measuring just 305 yards. Fowler’s drive settled inside 11 feet of the pin and he made the putt for eagle.

Rory McIlroy of Northern Ireland, who won the 2021 Wells Fargo at Quail Hollow, shot a 3-under 67. So did Spain’s Sergio Garcia, who holed out for eagle at #15.

But Garcia was caught on a television feed telling a PGA Tour rules official that he “can’t wait to leave this tour.” Garcia’s agent later confirmed that he applied for a release for the first event of the LIV Golf Invitational Series.