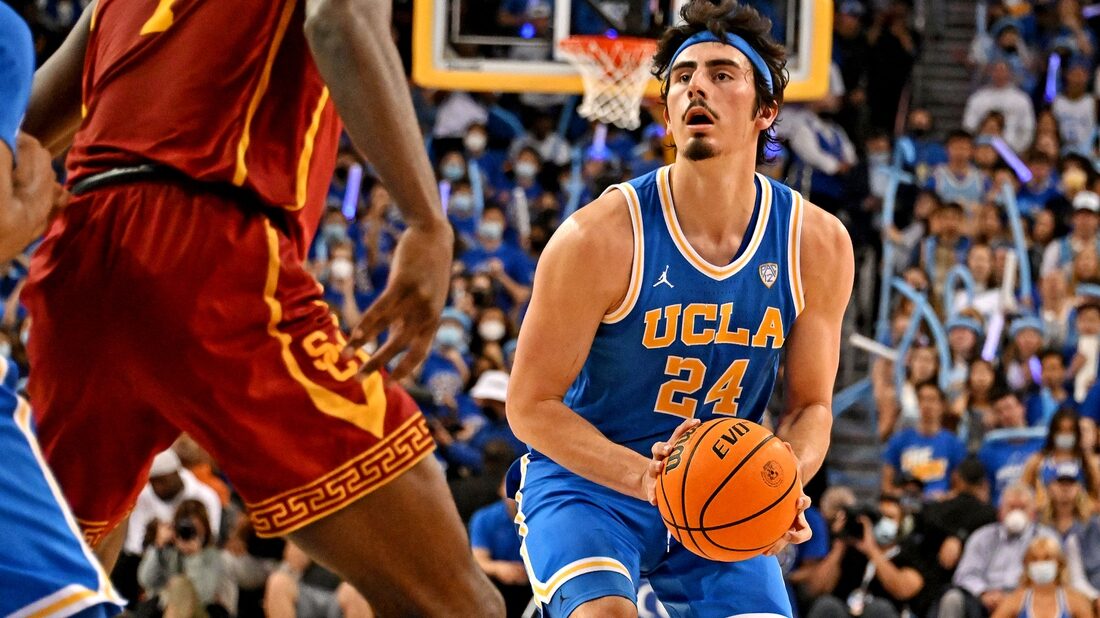 Jaime Jaquez Jr. said he feels fully healthy, and the results are backing that up.

The UCLA forward will seek his third straight stellar scoring performance when the second-seeded Bruins battle seventh-seeded Washington State in the quarterfinals of the Pac-12 tournament on Thursday night in Las Vegas.

The Cougars notched a 66-59 victory over Cal on Wednesday night to earn the matchup with UCLA.

Jaquez averaged 28.5 points in two games last week — including a career-best 30 in a win over Washington — to earn Pac-12 Player of the Week honors. He scored 27 points in a victory over Southern California and was 21 of 33 (63.6 percent) from the field in the two outings.

#13 UCLA (23-6) could use a hot Jaquez in March as it looks to replicate last season’s stunning Final Four run. The Bruins have won six of their past seven games entering the contest with the Cougars (19-13).

“I just think I’ve been feeling a lot better,” Jaquez said. “We’re in March, so I guess you can say that. Honestly, I’ve just been feeling really good. As far as my body, my ankles are doing a lot better right now. I’m excited. It’s time to turn it up to another gear.”

Jaquez went through a three-game funk in mid-February when he averaged 4.3 points on 6-of-19 shooting, including a four-point effort against Washington State. He has responded with five straight double-digit outings and is averaging 19.4 points during the span.

Jaquez ranks second on the Bruins in scoring at 13.3 points per game behind Johnny Juzang (16.7).

Jules Bernard (12.3) has also been playing well. He has scored in double figures in four of the past five games, including 19 in the 75-68 win over USC last Saturday.

Bernard said the Bruins are set for the challenge of making another postseason run.

“I think we are ready, but, obviously, we know the tough road,” Bernard said. “Being that we’ve been there before and we know how hard it is to win in those environments. We’re definitely focused and locked in going into both the Pac-12 Tournament and the NCAA Tournament.”

Tyrell Roberts led the Cougars with 14 points, but Washington State shot just 28.3 percent from the field and was outrebounded 41-26.

“We have to play better for sure,” Washington State coach Kyle Smith said after the win over Cal. “They blitzed us pretty good at Pauley (Pavilion). I don’t know if it’s a bad matchup or not but we’ll have to play better and look at what we did last time and make some adjustments.”

Roberts also had 14 points in Wednesday’s victory, which was the Cougars’ fourth straight. He made 5 of 9 shots on a night in which Washington State shot 36.4 percent from the field, including 6 of 21 from 3-point range

“Luckily they were able to go in,” Roberts said after raising his scoring average to 10.9 points per game. “I was getting into the paint a little bit and creating. I was hitting my threes. They were just falling tonight. My teammates trust me to hit those shots.”

Efe Abogidi scored a team-high 19 points to lift his average to 7.8. Michael Flowers, the Cougars’ leading scorer on the season (14.2), added 12 points.

Washington State big man Mouhamed Gueye (ankle) missed the game, but Smith said he expects Gueye to be available at least in a “limited capacity” against the Bruins.