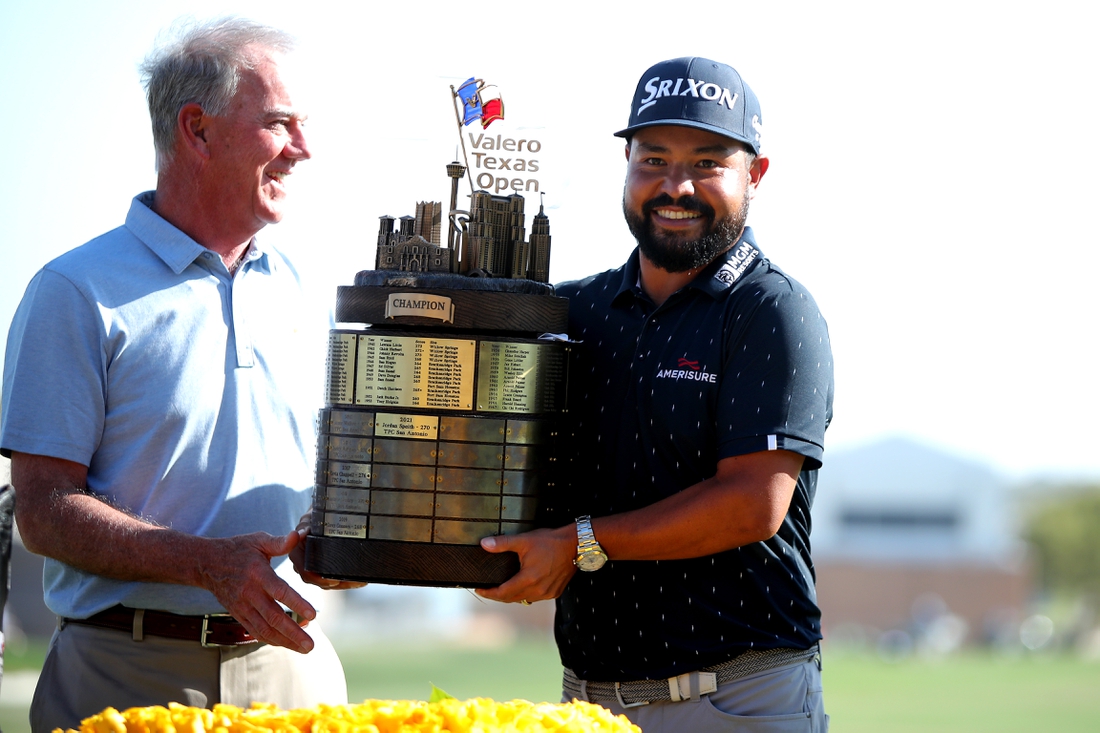 J.J. Spaun shot a final-round 69 Sunday to finish with a 13-under 275 and earn his first career win on tour at the Valero Texas Open at TPC San Antonio.

The two-shot victory earned Spaun his first-ever trip to the Masters in Augusta, Ga. next week, where he will enter play at #10 in the FedExCup standings.

“It’s a great feeling to be in the winner’s circle and now it’s like a game changer,” Spaun said.

“(Heading to the Masters) means the world. You’ve only dreamed of playing there, for most of us. To think that we’re going to be heading there tonight or tomorrow is incredible. I’m really looking forward to it and I can’t wait. Hopefully I can have another good week there, too.”

Coming into the day tied for the lead with three other golfers, Spaun misfired with a double bogey on his first hole, but he rallied to shoot a calm, collected round after that, making five birdies and 12 pars.

“I was pretty upset, but the only thing, the saving grace to that or the thing I learned from that is it’s the first hole,” Spaun said. “Like if I was 2 over through 5, it probably would have felt different, but I knew because it was only the first hole, like you’ve just got to forget about it.

“So I just didn’t let it bother me and I just tried to overcome and I did.”

Spaun became the first player to win a tournament despite starting off the final round with a double bogey since Tiger Woods at the 2008 U.S. Open.

He finished his day with four straight pars, with no other golfer able to draw closer. Matt Kuchar (69 on Sunday) and Australian Matt Jones (66) finished tied for second two strokes back at 11 under.

“I technically lost my card the COVID year, but they gave everyone that didn’t keep their card another year,” Spaun said. “Basically, we were in like a reshuffle category, kind of like the rookie category I’m in now, or I was. I was just playing bad, like I was lost. I didn’t know where my swing was, I didn’t know what to do. I had been working hard at it, too. That was the thing, I was putting so much into my game and getting nothing in return and just playing worse.

“I went to Korn Ferry Finals and fought hard and won it back in the first tournament. I didn’t win, but I got it back finishing tied for second or second place. I think that’s kind of what I needed maybe.”

Jones’ final-round 66 (eight birdies, two bogeys) tied for the best round of the day.

Hadwin had three birdies over his first five holes and five birdies in his final seven.

“Obviously today was an incredible finish,” Hadwin said. “It’s a tricky golf course and when the wind blows, the landing areas on the greens are so small, you’ve got to be extremely precise.”

Hossler had been tied with Spaun coming into the final round, but a 72 sank his chances.

The other leaders coming into the day, South Africa’s Dylan Frittelli (73) and Brandt Snedeker (75), finished tied for eighth and tied for 18th, respectively.