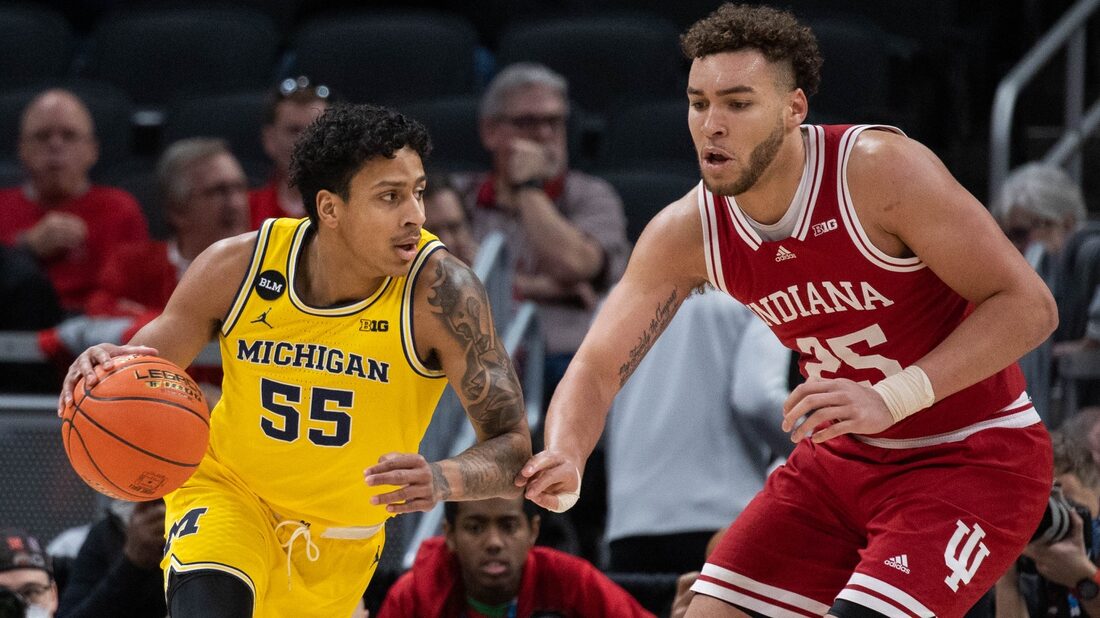 Xavier Johnson made two free throws with 9.7 seconds left and Indiana stormed back to beat Michigan 74-69 in the second round of the Big Ten tournament on Thursday in Indianapolis.

Johnson had 17 points, eight rebounds and seven assists to help the Hoosiers, seeded ninth in the conference tournament, advance to play top-seeded Illinois on Friday morning.

Trailing 71-69, Michigan turned the ball over for the 10th time in the second half on an errant outlet pass. In a must-foul situation, they clamped Johnson and sent him to the line, only to see the lead stretched to four. Michigan then failed to score at the other end.

Trayce Jackson-Davis had 24 points, eight rebounds and four blocks for Indiana to spoil coach Juwan Howard’s return to the bench from suspension.

Indiana surged to the lead after a 28-4 run in the second half, led by Jackson-Davis’ 19 second-half points. Michigan led 41-28 at halftime.

Michigan guard Eli Brooks gave the Wolverines a 60-43 lead with a layup at the 13:36 mark before the wheels fell off for the Wolverines.

Jackson-Davis put Indiana up 63-62, converting a pair of free throws, with 5:39 remaining.

The Wolverines are in danger of missing the NCAA Tournament field with the loss, which gives them a 17-14 record.

Michigan missed 14 of 20 tries from 3-point range and shot 37.9 percent from the field.

Hunter Dickinson had 15 points for the Wolverines, who were led by guards Devante Jones (18 points) and Brooks (17).