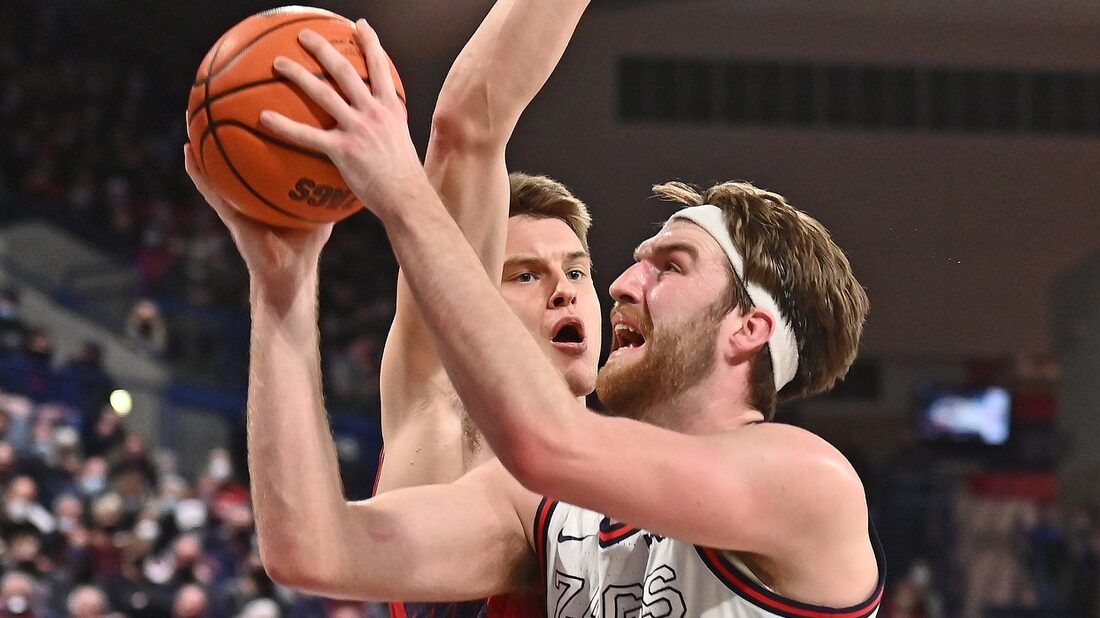 A team ranked #1 in the nation typically isn’t looking for revenge.

However, that certainly will be the case on Tuesday when top-ranked Gonzaga squares off with #17 Saint Mary’s in the West Coast Conference tournament title game at Las Vegas.

The teams split two regular-season meetings, including the Gaels’ epic 67-57 takedown of the visiting Bulldogs on Feb. 26. Gonzaga won the first meeting 74-58 at home on Feb. 12.

“If you’re in college basketball and you get to play the #1 team three times, that’s pretty cool,” Saint Mary’s coach Randy Bennett said after the second-seeded Gaels (25-6) held off Santa Clara 75-72 in Monday’s semifinals.

The two WCC powers are meeting in the championship game for the fifth time in seven seasons. The Zags won three of the previous four title-game matchups.

Both squads were on the court Monday night for the first time since the Gaels’ eye-opening upset. The top-seeded Bulldogs (25-3) defeated San Francisco 81-71 in their semifinal to reach the WCC championship contest for the 25th consecutive season.

Bulldogs stars Drew Timme and Chet Holmgren will be seeking redemption. Each player was held to six points in the recent outing against Saint Mary’s when the Gaels beat a #1 ranked team for the second time in school history.

“It’s just what we do, that’s just Zag basketball and we got away from it a little bit and we just focused on that this week prior to this (game),” Timme said afterward. “We just got back to doing what we do best, and that’s the bottom line.”

Timme had 25 points and eight rebounds in the first meeting against Saint Mary’s. Gaels guard Tommy Kuhse averaged 15 points in the two games.

Kuhse had a hot hand on Monday as he scored a season-best 27 points and made all three of his 3-point attempts. Kuhse has topped 20 points in three of the past five games.

The Gaels held the Bulldogs to a season-low point total during the recent upset, and Kuhse knows another top-flight effort is needed.

“You gotta lock in on keeping them out of transition,” Kuhse said. “They thrive in that area. If they get easy baskets, they’ll kind of barnstorm you a little bit.”

On Monday, Gonzaga led 71-47 against the Dons with 8:45 remaining before a shaky finish as San Francisco crept within eight before the Bulldogs closed it out.

“A few turnovers down the stretch and then we kind of got in a little trouble fouling too much and letting them get some good (3-pointer) looks and that’s how they got back in the game,” Gonzaga point guard Andrew Nembhard said. “Got to be a little more crisp down the stretch for sure.”

Saint Mary’s also had trouble closing. The Gaels held a 15-point, second-half lead before Santa Clara rallied within one and had a chance to go ahead for the first time in the final seconds.

However, Saint Mary’s guard Logan Johnson blocked Jalen Williams’ short shot with under six seconds to play and made two three throws with 3.6 seconds left to help the Gaels hold on.

“He does it really every night for us no matter who we play, and it gives us such confidence as a unit defensively that we can stick him on whoever we need to and he’s going to get the job done,” Kuhse said of Johnson. “He really anchors our defense.”