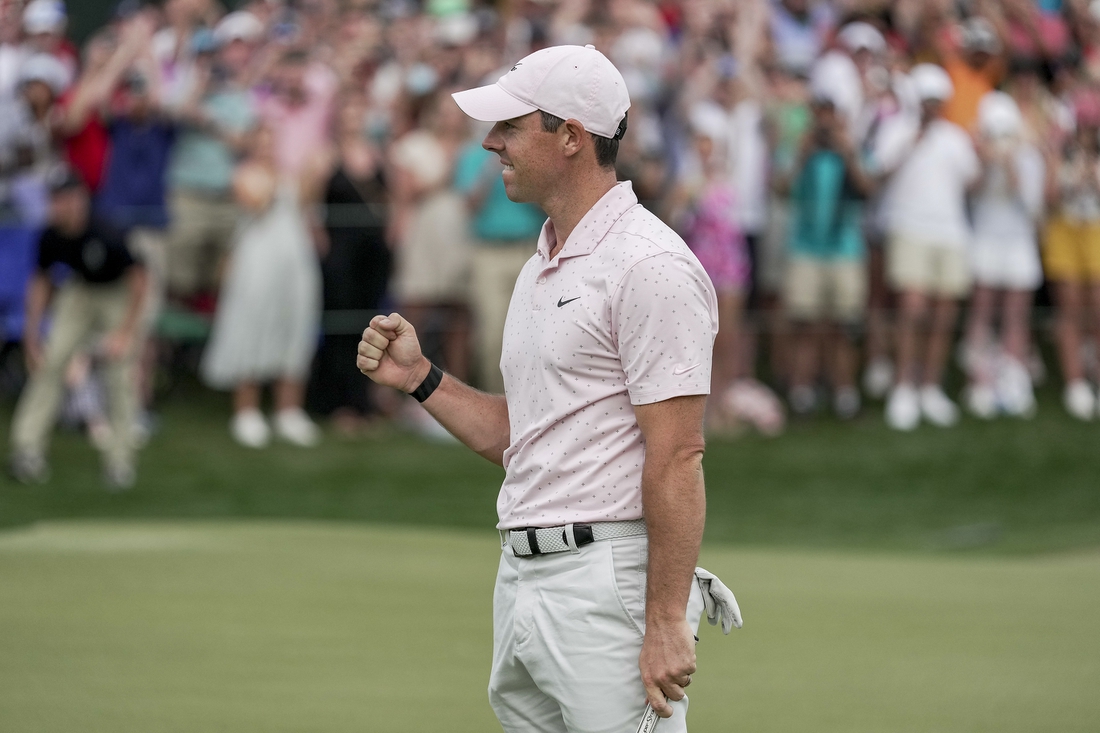 PGA TOUR
LAST TOURNAMENT: Mexico Open (Jon Rahm)
THIS WEEK: Wells Fargo Championship, Potomac, Md., May 5-8
Course: TPC Potomac at Avenel Farm (Par 70, 7,160 yards)
Purse: $9M (Winner: $1.62M)
Defending Champions: Rory McIlroy
FedExCup Leader: Scottie Scheffler
HOW TO FOLLOW
TV: Thursday-Friday, 2-6 p.m. ET (Golf Channel); Saturday-Sunday, 1-3 p.m. (Golf Channel), 3-6 p.m. (CBS)
PGA Tour Live: Daily feeds on ESPN+
Social Media: @WellsFargoGolf (Twitter)
NOTES: The tournament is moving to TPC Potomac at Avenel Farm for one year with Quail Hollow Club playing host to the 2022 Presidents Cup in September. TPC Potomac has played host to 21 previous PGA Tour events, the most recent being the Quicken Loans National in 2018 won by Francesco Molinari. … McIlroy, a 20-time winner on the PGA Tour, is seeking his first successful title defense. This is the only event he has won more than twice in his career (2010, 2015, 2021). … Morgan Hoffmann has two starts remaining on a medical extension and needs to earn 238.42 FedEx Cup points to retain his full status on tour. Hoffman was diagnosed in 2017 with facioscapulohumeral muscular dystrophy. … Sponsors exemptions include Ben Martin, who finished runner-up at the Corales Puntacana Championship in March, and Howard University star Gregory Odom Jr. … Rickie Fowler is one of two players to finish 12th or better in both years the Quicken Loans National was held at TPC Potomac. However, he has fallen to 146th in the world rankings after missing five of his past eight cuts.
BEST BETS: McIlroy (+850 at BetMGM) is teeing it up for the first time since closing with a 64 at the Masters. He has never competed on tour at TPC Potomac. … Corey Conners (+2000) has four top-12s in his past six starts, including a solo third at the Match Play. … Tony Finau (+2200) is coming off a T2 in Mexico, his first top-10 finish of the season. … Abraham Ancer (+3000) finished runner-up last year and shares the course record at TPC Potomac. He finished T4 at the 2018 Quicken Loans National. … Tyrrell Hatton (+3300), who finished T2 at the Arnold Palmer Invitational this year, leads the tour in strokes gained putting this season (1.123 per round). … Sepp Straka (+5000), who earned his first tour win earlier this season at the Honda Classic, makes his first start as a top-50 ranked player.
NEXT TOURNAMENT: AT&T Byron Nelson, McKinney, Texas, May 12-15

Champions Tour
LAST TOURNAMENT: Insperity Invitational (Steven Alker)
THIS WEEK: Mitsubishi Electric Classic, Duluth, Ga., May 6-8
Course: TPC Sugarloaf (Par 72, 7,179 yards)
Purse: $1.8M (Winner: $270,000)
Defending Champion: Dicky Pride
Charles Schwab Cup leader: Miguel Angel Jimenez
HOW TO FOLLOW
TV: Friday-Sunday, 12-3 p.m. ET (Golf Channel)
Social: @MEClassicGolf
NOTES: This is the third of four consecutive weeks of events on tour. The Greg Norman-designed course has ranked in the top seven of the most difficult on tour in six of the past eight years. It ranked as the most-difficult non-major last year with a scoring average above 73 for the second consecutive time…. Stephen Ames holds the tournament scoring record of 15-under 273 set in 2017. He also finished T2 last year and T6 in 2019. The event was not held in 2020 due to the coronavirus pandemic. … Bernhard Langer, 64, has a win and four runner-ups among eight previous starts. He also shares the tournament course record of 64 along with Scott Parel, Olin Browne and Woody Austin. … The four Monday qualifiers are John Inman, Mark Walker, Matt Gogel and Cliff Kresge.
NEXT TOURNAMENT: Regions Tradition, Birmingham, Ala., May 12-15