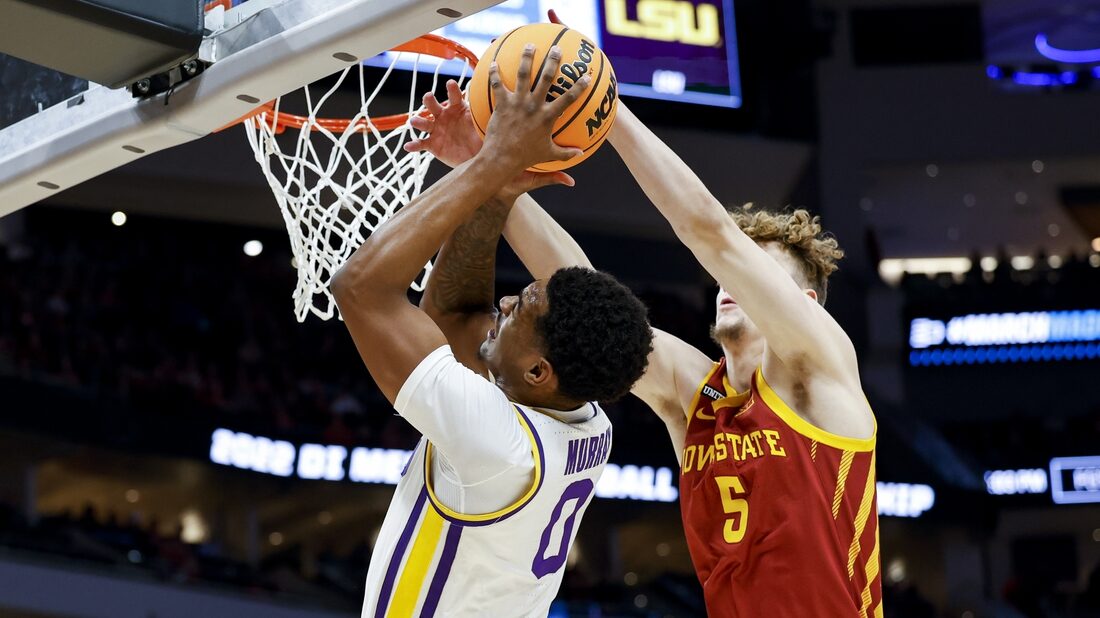 Freshman Tyrese Hunter scored a career-high 23 points and Izaiah Brockington added 19 as 11th-seeded Iowa State held off #6 seed LSU 59-54 in the first round of the Midwest Region in Milwaukee on Friday.

LSU pulled within 56-54 on Mwani Wilkinson’s layup, but Hunter hit his career-best seventh 3-pointer with the shot clock winding down to put the Cyclones up 59-54 with 19.3 seconds left.

“Everybody pictures in their head what they want the game to look like,” Hunter said, “but I let the game come to me, and I got the shots that were presented to me, and I just let them fly.”

Tari Eason had 18 points and Darius Days tallied 14 points and 12 boards for LSU (22-12), playing its first game under interim coach Kevin Nickelberry. Head coach Will Wade and associate head coach Bill Armstrong were dismissed on Saturday after LSU received an NCAA notice of allegations of significant misconduct in the program.

Hunter, the Big 12 Freshman of the Year from nearby Racine, Wis., made 8 of 13 shots, including 7 of 11 from deep. Six of those 3-pointers came in the second half.

LSU had a 38-29 rebound advantage but committed 19 turnovers, which gave Iowa State a 22-8 edge in points off turnovers.

Earlier, the Cyclones’ Caleb Grill hit a 3-pointer from the right corner and followed with a steal and a jam to put Iowa State up 41-35. Eason, the SEC Sixth Man of the Year and LSU’s leading scorer at 16.9 points per game, then picked up his fourth foul with just over 11 minutes left.

LSU was within two possessions at the half despite making just 7 of 27 shots (25.9 percent) and committing 10 turnovers, which led to eight Iowa State points.

Iowa State went in front 24-12 on a 3-pointer by Hunter with 6:37 left in the half, but the Cyclones did not score the rest of the way, missing their final eight shots, including seven from beyond the arc.