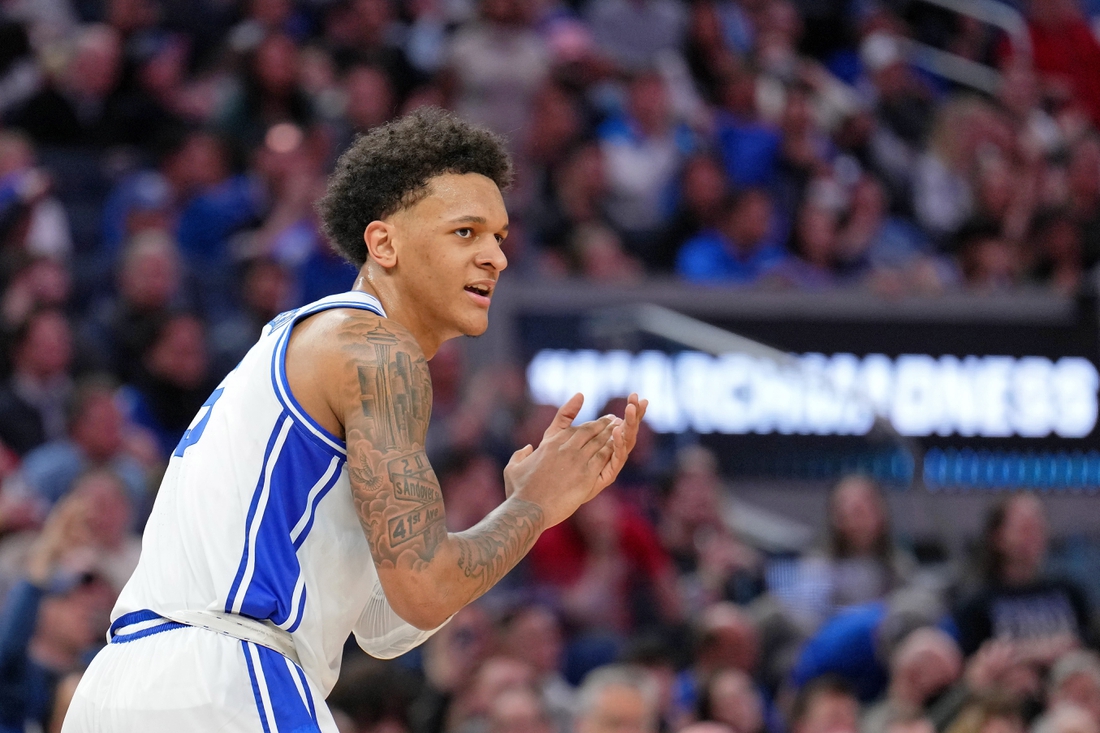 And then there were four.

While Duke (32-6) and coach Mike Krzyzewski are authoring a storybook signoff as West Region champs, archrival North Carolina (28-9), the #8 seed in the East Region, crashed the Final Four and stands in the way of any epic sendoff the Blue Devils might have planned Monday night.

Duke opened as a 4.5-point favorite at PointsBet but the line had moved to 3.5 by Thursday with North Carolina drawing 51 percent of the spread bets and 66 percent of the handle. The 4.0-point line at DraftKings had drawn more action for the Blue Devils with 54 and 55 percent, respectively.

The Tar Heels already spoiled Coach K’s homecourt goodbye in a game coach Hubert Davis believes flipped the switch for what he felt was an underachieving team up to that point. When his group walks into the Superdome in New Orleans for the first time for a practice open to the public on Friday, he hopes they realize the gravity the Tar Heels defied to get here.

“I don’t think anything can be as crazy as the game leading up the game over in Cameron. As I said before, we keep our eyes straight ahead and we ignore all the noise,” Davis said. “And I consistently tell them to turn down or turn off the noise of the phone, family and friends. If you do that — just focus on our preparation and our practice and if you do that, then our play will be good. And that’s what we’re going to do this upcoming week.”

Davis called the last 11-plus months “a wild ride.” Hired to replace retiring Roy Williams and get North Carolina back to where bluebloods belong – the Final Four – Davis has been to the Final Four as a player and coach before. He wants to keep the focus on players and their experience.

But Davis understands he’ll be asked about the postgame handshake line at Cameron Indoor Stadium and said this week he remembers “everything” that happened this season.

Krzyzewski is taking it a step further to diminish the rivalry and any remnant embers from the postgame handshake incident in which Blue Devils assistant Chris Carrawell snubbed Davis.

Duke and Carolina take the court in the Superdome on Saturday night following the first national semifinal between Villanova and Kansas.

This is the first time the rivals have met in the Final Four. It’s the 258th game between the college basketball behemoths.

“I’ve looked at it as, we’re playing in the Final Four, so the history of (Duke-Carolina) I have not paid attention to,” Krzyzewski said. “(Saturday) is the most amazing day in college basketball to bring four champions together and to play for another championship.”

Krzyzewski has five national titles on his resume. To get a sixth, the Blue Devils need to solve what ailed them in the 13-point home loss on March 5.

“You can’t go into it (thinking) rivalry or payback,” Krzyzewski said. “We want to win a championship. If we go in with the other two things, we’re not going to win. It’s gotta be looked at as four teams playing for a national championship. The (rest) is stupid stuff. That means nothing. That’s what sport for fans is about. It’s not for coaches and players.”

Players have clearly been coached to avoid giving the opposition any added motivation for the national semifinal. North Carolina’s Armando Bacot said after the Tar Heels beat Saint Peter’s knowing Duke was up next in the Final Four that Davis would not want him to comment on the game.

But this week Bacot said he thinks “it’s great” to see the Blue Devils in New Orleans.

“It’s an amazing storyline for the NCAA and the farewell tour, too,” Bacot said.

When Davis first huddled recruits and parents with returning players in Chapel Hill, he told them to book flights and hotels in New Orleans. Bacot said it’s hard to hold his smile thinking back on that meeting and the belief Davis had then, and instilled in them along the way.

The Tar Heels are in the Final Four for the third time in six NCAA Tournament years – including the 2017 national championship — and 21st overall. UNC lost to Villanova in the national title game in 2016.

Bacot scored 20 points and grabbed 22 rebounds in the East final against Saint Peter’s after playing big in key moments against UCLA in the semifinal.

Davis said the likely lottery pick is the key to Duke’s success, including a 13-2 run over the Blue Devils’ past 15 games. But Banchero needed 26 shot attempts to score 23 points in their most recent meeting, a 94-81 North Carolina win.

“He’s got so much more that he is still going to develop,” Krzyzewski said. “But it’s been a steady track up, and he is playing his best basketball right now.”

The same point total at PointsBet has seen one-sided action on the Over with 60 and 70 percent, respectively.