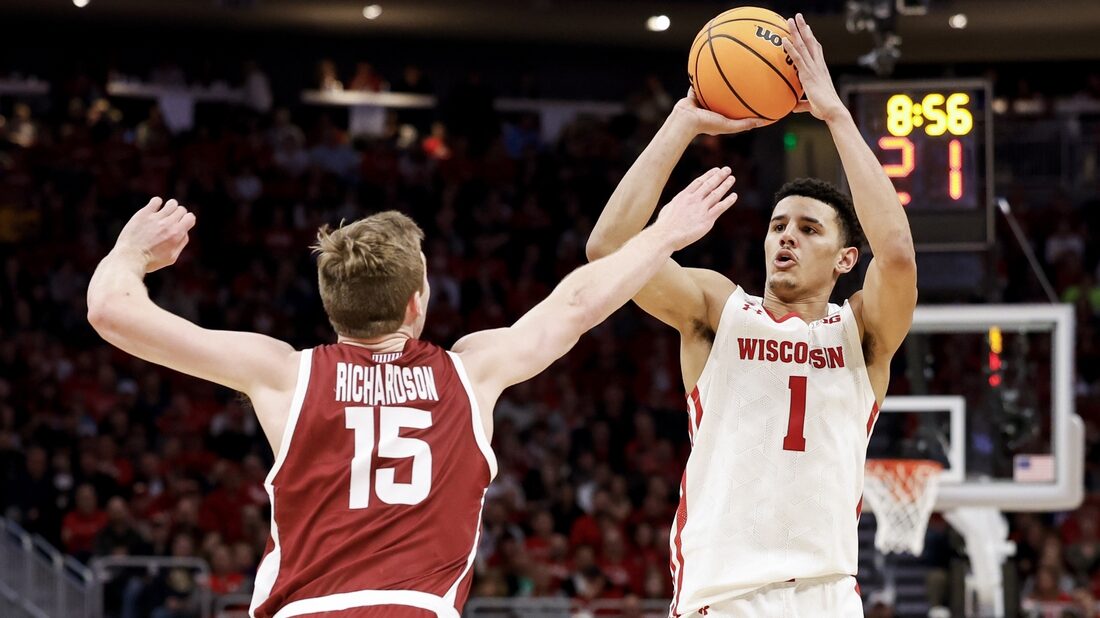 Although they have not met this season, there will be plenty of familiarity when third-seeded Wisconsin takes on #11 seed Iowa State on Sunday evening in the second round of the NCAA Tournament’s Midwest Region in Milwaukee.

Wisconsin (25-7), playing just 80 miles from home, withstood a 3-point barrage by 14th-seeded Colgate for a 67-60 victory Friday in the first round before a decidedly partisan, red-clad crowd.

Iowa State (21-12) bounced #6 seed LSU 59-54 behind a career-best 23 points from freshman Tyrese Hunter, a high school standout in Racine, Wis., who was not recruited by the Badgers.

First-year Iowa State coach T.J. Otzelberger, who directed the rebound from last season’s 2-22 mark, is a Milwaukee native who played collegiately at Wisconsin-Whitewater and got his coaching start at Burlington (Wis.) Catholic Central High School.

Wisconsin, coming off consecutive losses for the only time this season, rallied behind Big Ten Player of the Year Johnny Davis, who scored the Badgers’ final 14 points in turning back Colgate.

“I would say he hates losing more than he likes winning,” Wisconsin coach Greg Gard said of Davis. “I thought he got going pretty good in the second half, and fortunately took good shots, got to the foul line … 3-point play was big off of one of those offensive rebounds. He does what great players do — when the lights get bright, they step up.”

Colgate finished with 10 3-pointers, but Davis’ breakaway jam capped a 10-point run that put Wisconsin up 58-52 with 3:56 left. The Badgers also clamped down defensively, holding the Raiders scoreless for more than seven minutes.

Davis, who leads the Badgers by averaging 19.8 points and 8.2 rebounds a game, scored 17 of his game-high 25 points in the second half and finished with eight rebounds. Tyler Wahl added 15 points, a team-high nine rebounds and four assists. The Badgers had a 34-24 advantage on points in the paint.

Chucky Hepburn added eight points, six rebounds and five assists, with no turnovers in 33 minutes. The 7-foot tandem of Steven Crowl and Chris Vogt combined for 11 points and seven rebounds. Brad Davison, the team’s second-leading scorer at 14.1, had just four points against Colgate on 1-of-5 shooting from the field.

Wisconsin, which entered the tournament with the fewest turnovers in the nation (8.5 per game), committed just five against Colgate.

“It felt good, but I was looking for my grandma. She was in there,” said Hunter, who looked into the crowd after each 3-pointer. “You know, I know the whole family was there. It just felt good. I was trying to go out there and get the win.”

Izaiah Brockington, the Cyclones leading scorer at 17.3 points a game, added 19 against LSU. Brockington, a transfer from Penn State, and Gabe Kalscheur, who played three seasons at Minnesota, are familiar with the Badgers from Big Ten play.

The Cyclones won their first 12 games and were 16-5 at one point, but dropped three straight entering the NCAA Tournament.