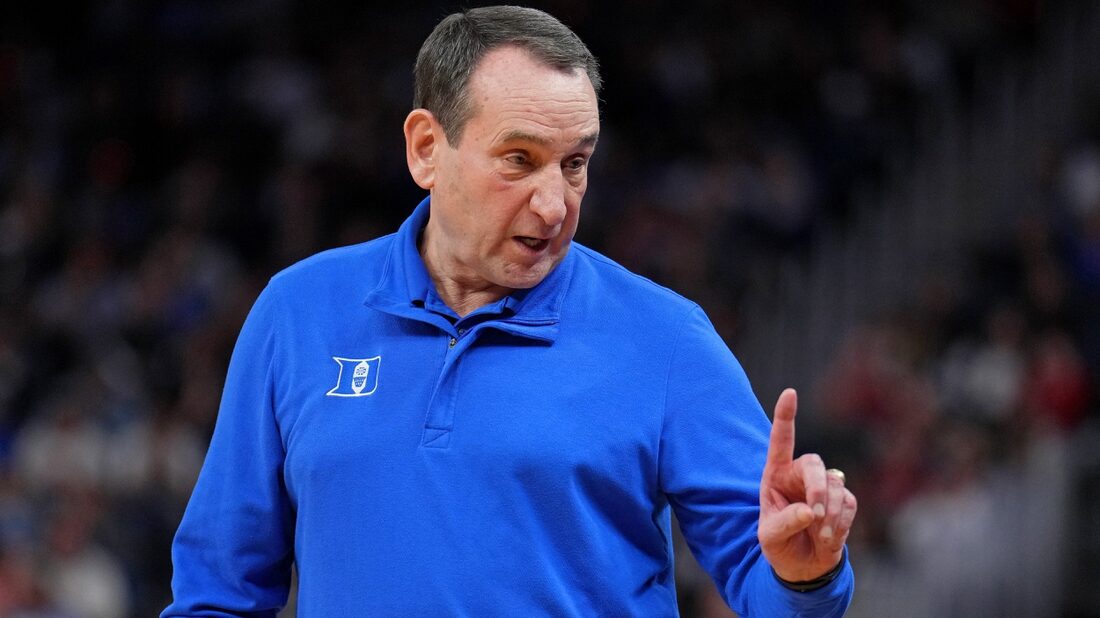 Arkansas just took down the #1 overall seed of the NCAA Tournament in style and now faces a more daunting assignment.

Coach K is three wins away from retiring as a six-time national champion, and the fourth-seeded Razorbacks will look to again be spoilers when they battle the second-seeded Blue Devils in the West Region final on Saturday night in San Francisco.

Arkansas (28-8) is in the Elite Eight for the second straight season after toppling high-powered Gonzaga 74-68 in Thursday’s Sweet 16. Another upset will elevate the Hogs to their first Final Four since 1995.

The Blue Devils (31-6) advanced with a 78-73 win over third-seeded Texas Tech to send Krzyzewski to the Elite Eight for the 17th time. The victory was the 100th in NCAA Tournament competition for Krzyzewski, and was achieved despite his team trailing for more than 26 minutes.

A win over Arkansas would send Coach K to his 13th Final Four in his 42 seasons at Duke. But he downplayed the personal milestones in play after the win over Texas Tech and deflected the praise toward his players.

“What a great group, these kids,” Krzyzewski said. “They’ve grown up so much in the last 12 days. It’s such a joy. It’s an amazing thing.”

The Blue Devils stepped up their play in the second half against the Red Raiders by shooting a torrid 70.8 percent from the field and making their final eight shots.

Freshman star Paolo Banchero scored 22 points and nailed the go-ahead 3-pointer with 2:55 remaining to lead the late-game charge that netted Duke its 12th win in the past 14 games.

“I would say all year in the biggest moments we’ve always stepped up, and there’s no bigger moment than this,” Banchero said after the win. “I don’t know about these guys, but I’ve never played in a basketball game like that.”

While the Blue Devils are motivated to send Krzyzewski out with a title, the Razorbacks are provoked by perceived snubs.

After Thursday’s victory, Arkansas coach Eric Musselman thanked everyone who said the Razorbacks had no chance to defeat Gonzaga. The tide won’t be as stern this time, but Arkansas is again an underdog despite winning 18 of its past 21 games.

“I think we’re being disrespected the whole year, so it’s just another thing for us,” he said. “They gave (Gonzaga) an 86 percent chance to win. We saw that and everything they were saying. We felt like they were dancing before the game. That was disrespect to us.

“We came into the game playing hard and had a chip on our shoulder. Every game we do, and we played hard for 40 minutes, so that’s just what we do now.”

The Razorbacks will need a more efficient shooting performance from star guard JD Notae against Duke.

He had a stellar stat line against Gonzaga with 21 points, six rebounds, six assists and three steals but was just 9-of-29 shooting from the field. Notae is shooting just 30.2 percent (19 of 63) while averaging 18.7 points during Arkansas’ three NCAA Tournament wins.

Musselman wasn’t even mildly concerned that Notae missed 20 shots against the Bulldogs.

“We trust him. I’m going to roll with the guys that have done it all year,” Musselman said of Notae. “He could have missed 10 more shots, and I probably would have still called his number because I had that belief that the next one is going in. So do his teammates.”

The Razorbacks and Blue Devils have met twice previously in NCAA Tournament play. The 1994 clash is memorable for Arkansas as it defeated Duke 76-72 in the title game for its lone national championship. Scotty Thurman buried the memorable go-ahead 3-pointer with 50.7 seconds left for Arkansas.