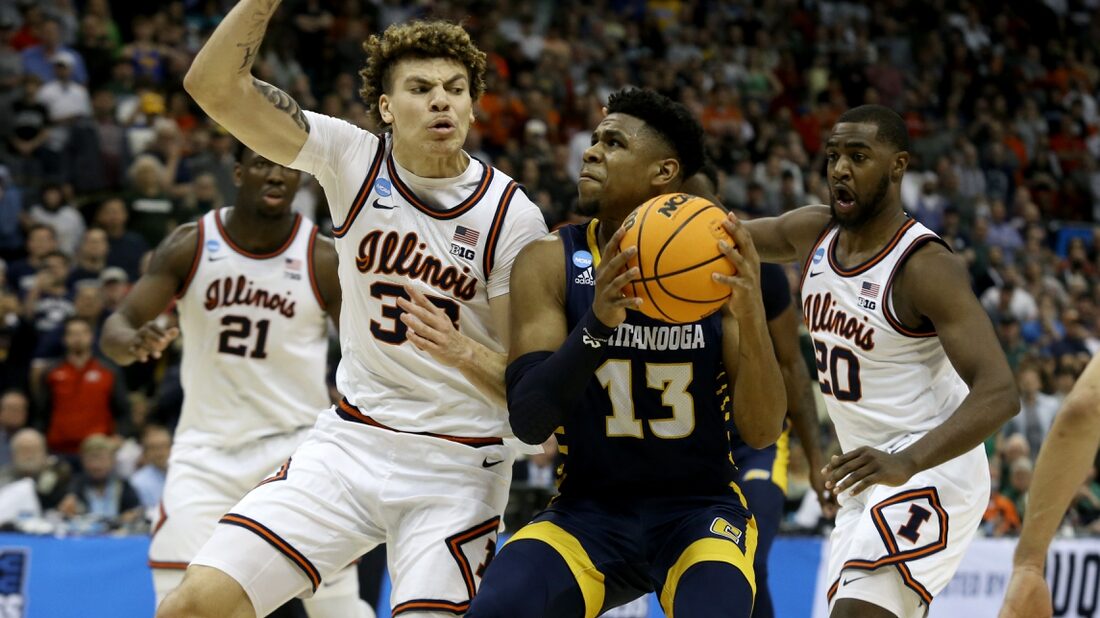 Jim Valvano coined the phrase in 1983 when he guided NC State to a surprising NCAA championship. And Illinois coach Brad Underwood uttered it minutes after the fourth-seeded Fighting Illini escaped 13th-seeded Chattanooga 54-53 on Friday night in a first round South Region NCAA Tournament matchup.

“Survive and advance,” said a relieved Underwood. “That’s pretty much the theme of that game.”

It’s pretty likely the Fighting Illini will have to perform at a higher level than “survive and advance” if they’re to oust fifth-seeded Houston in the early game on Sunday in Pittsburgh and move into the Sweet Sixteen next week.

Illinois (23-9) led for just 25 seconds against its Southern Conference opponent. It trailed 20-6 at one point in the first half, experiencing frightful difficulties in the shot-making department. It was even outrebounded despite the usual Kofi Cockburn double-double (17 points, 13 rebounds).

But the Illini managed to move on. It played good defense against the Mocs’ top scorers, holding Malachi Smith and David Jean-Baptiste to a combined 6 of 31 from the field. And it made clutch free throws, getting two from Alfonso Plummer with 12.0 seconds left to take the lead for good.

“I just play with confidence,” Plummer said, “and I was ready for my moment. And it came.”

Cockburn enters the game averaging 21.0 points and 10.7 rebounds per game, good enough to earn him first team All-American honors earlier in the week. Plummer adds 14.8 points, while Trent Frazier chips in 11.7 to go along with a team-high 4.1 assists.

Jacob Grandison is also in double figures at 10.3 points, but he didn’t score in nine minutes against Chattanooga. He didn’t play in the Big Ten tournament last week after suffering a shoulder injury.

Meanwhile, Houston (30-5) enjoyed a much easier time in its NCAA tourney opener, eliminating UAB 82-68 behind 25 points from Kyler Edwards and 14 more from Fabian White Jr. The Cougars also got seven assists from Jamal Shead and held the Blazers’ leading scorer, Jordan Walker, to 1-of-10 shooting from the 3-point line.

“I think the key for us is just attack,” said Houston coach Kelvin Sampson. “We just tried to get the first good shot and pulled the trigger and just tried to go get the ball at the offensive glass. Good that we get to stay together for another game and we’ll see how that goes.”

Sampson was most proud of his team reaching the 30-win milestone in what could have easily been a lost year. Departures from last season’s Final Four team and injuries this season have left the Cougars without a single starter from that squad.

“It comes down to when your best players value winning over statistics,” Sampson said.

Edwards is the leading active scorer on the team at 13.9 points per game. Top scorer Marcus Sasser (17.7) was lost after 12 games with a season-ending toe injury, but Edwards, White (13.2) and UConn transfer Josh Carlton (12.0 points, 6.3 rebounds) have helped take up the slack.