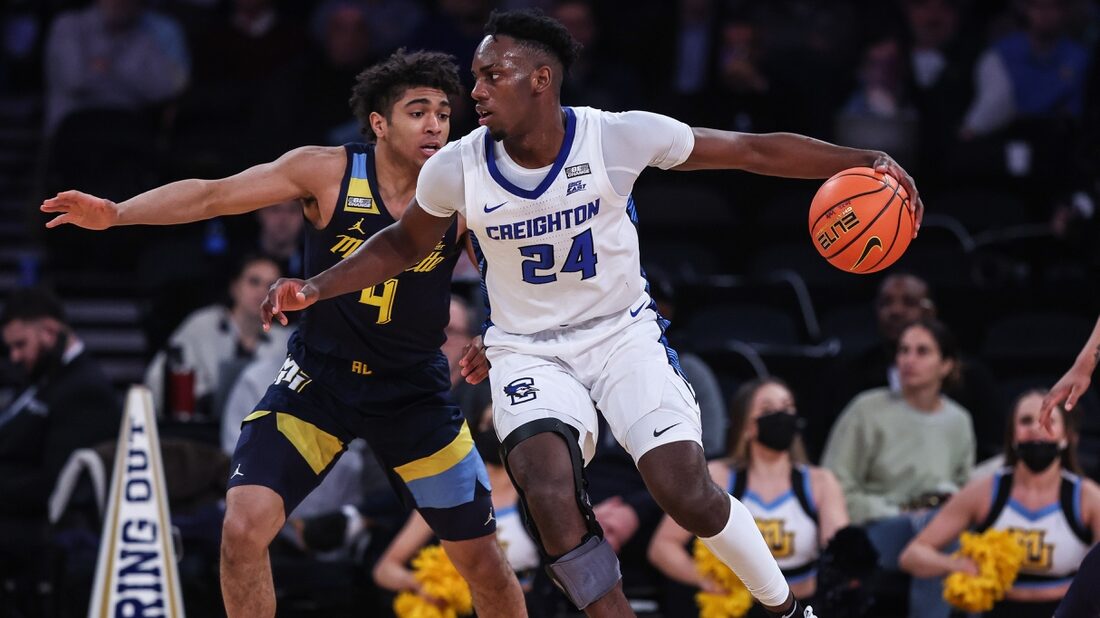 Ryan Kalkbrenner and Arthur Kaluma each scored 14 points for Creighton (22-10), which will face #11 Providence, the tournament&rsquor;s top seed, in a semifinal matchup Friday evening. Trey Alexander had 11 points and eight assists for the Bluejays.

Darryl Morsell scored 18 points and Justin Lewis had 17 for Marquette (19-13), which also got six assists from Tyler Kolek.

Hawkins&rsquor; 3-pointer with 2:05 left gave the Bluejays a 66-61 lead. After Lewis scored for Marquette, Kaluma made a driving layup for a 68-63 lead with 1:18 left. Marquette didn&rsquor;t score again.

Morsell rattled in a 3-pointer as part of a personal 7-0 run that trimmed the Golden Eagles&rsquor; deficit to 60-55. Alex O&rsquor;Connell&rsquor;s 3-pointer from the right wing briefly restored the Creighton lead to eight points, but Kolek responded with a trey for Marquette and then Greg Elliott&rsquor;s three-point play trimmed Creighton&rsquor;s lead to 63-61 with 3:04 to go.

After shooting a lackluster 33.3 percent in the first half, Creighton started to connect in the second half, making nine of its first 11 shots to expand its lead to 13 points.

The most emphatic of those shots came courtesy of Kaluma, who drove the right baseline for a dunk and was fouled. He completed the three-point play for a 39-31 advantage with 2:52 gone in the period. KeyShawn Feazell made another three-point play to make it 51-38 with 11:27 to go.

Marquette cut the deficit to 51-45 with seven straight points, capped by Morsell&rsquor;s driving layup. But the Bluejays answered as Kalkbrenner&rsquor;s putback began a 6-0 run that extended the lead back to 12 at 57-45.

Creighton led 14-7 early in the first half, and after Marquette cut the lead to 14-12, the Bluejays extended it to 18-12 on a dunk by O&rsquor;Connell and two foul shots by Kaluma with 9:18 remaining before halftime.

Marquette tied the score at 21 on Kam Jones&rsquor; driving layup, but a 6-0 run capped by Rati Andronikashvili&rsquor;s triple gave the Bluejays a 27-21 advantage with 3:40 to go.

Creighton&rsquor;s only other basket for the remainder of the half was Kalkbrenner&rsquor;s putback with seven seconds to go, giving the Bluejays a 29-26 halftime lead.