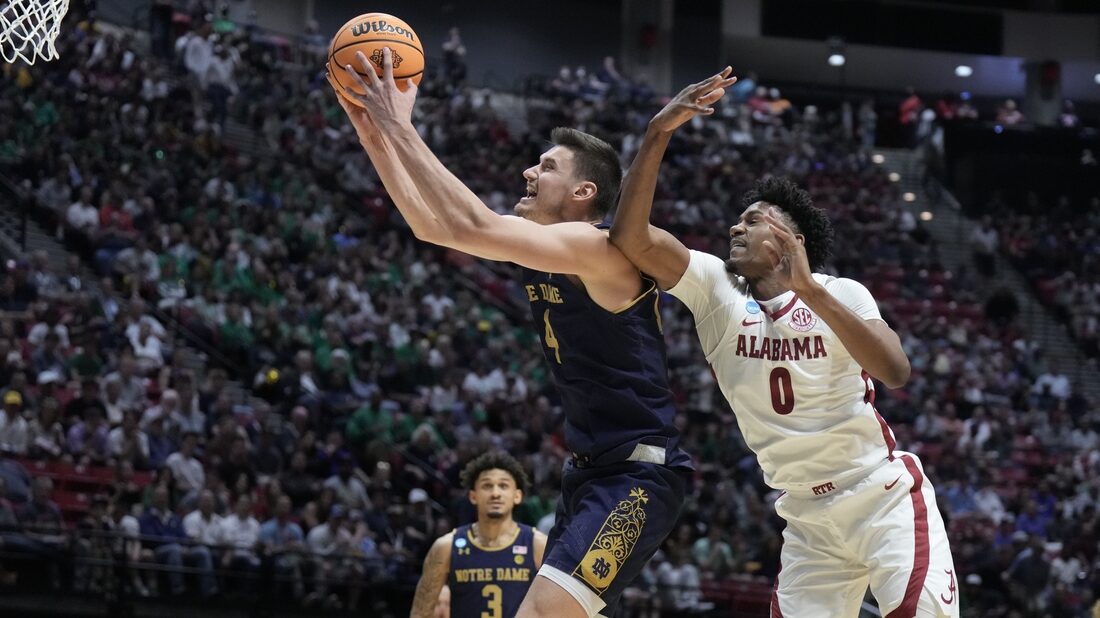 Notre Dame (24-10) advanced to play third-seeded Texas Tech (26-9) on Sunday with a spot in the West Regional semifinals in San Francisco at stake. The Red Raiders advanced by beating #14 seed Montana State 97-62 earlier on Friday.

Blake Wesley added 18 points, Paul Atkinson Jr. scored 13 and Nate Laszewski had 10 for Notre Dame, which is seeking its first Sweet 16 appearance since 2016.

“It’s everything I dreamed of. Look at our fan section. We really came to compete,” Ryan said of the Fighting Irish, who won only 11 games last season. “We knew how capable this (our) team was from the very beginning and it feels good to showcase that on the biggest stage.”

Alabama (19-14) played most of the game without point guard Jahvon Quinerly, who suffered a left knee injury early in the first half.

Quinerly, who averages 14.3 points and 4.3 assists, left the game with 16:31 left in the first half with a left knee injury while trying to make a move to the basket. He did not return to the game and came back to the bench with crutches and a brace on his knee. JD Davison, who played point guard in his absence, had 11 points, nine assists and six turnovers.

After Notre Dame extended its five-point halftime lead to 44-36 on a 3-pointer by Laszewski, the Crimson Tide responded with a 6-0 run capped by Davison’s steal and layup, cutting the deficit to 44-42 just 2:03 into the period.

But Ryan’s 3 increased the Irish lead back to five, and Notre Dame built its advantage back to 10 on a layup by Atkinson, making it 52-42.

Six straight points gave Notre Dame its biggest lead, 61-47, on a driving layup by Wesley with 9:21 left. Gary’s three-point play finished an 8-2 run that cut the Crimson Tide’s deficit to 63-55 with 5:24 to go. Alabama didn’t get closer.

Alabama led 25-21 on a 3-pointer by Davison with 6:58 to go in the half, but Notre Dame scored the next six points to take the lead. That was one of 11 lead changes in the half, which also featured seven ties.

Alabama’s last lead came at 33-32 with 3:07 left in the half after Shackelford made one of two foul shots.