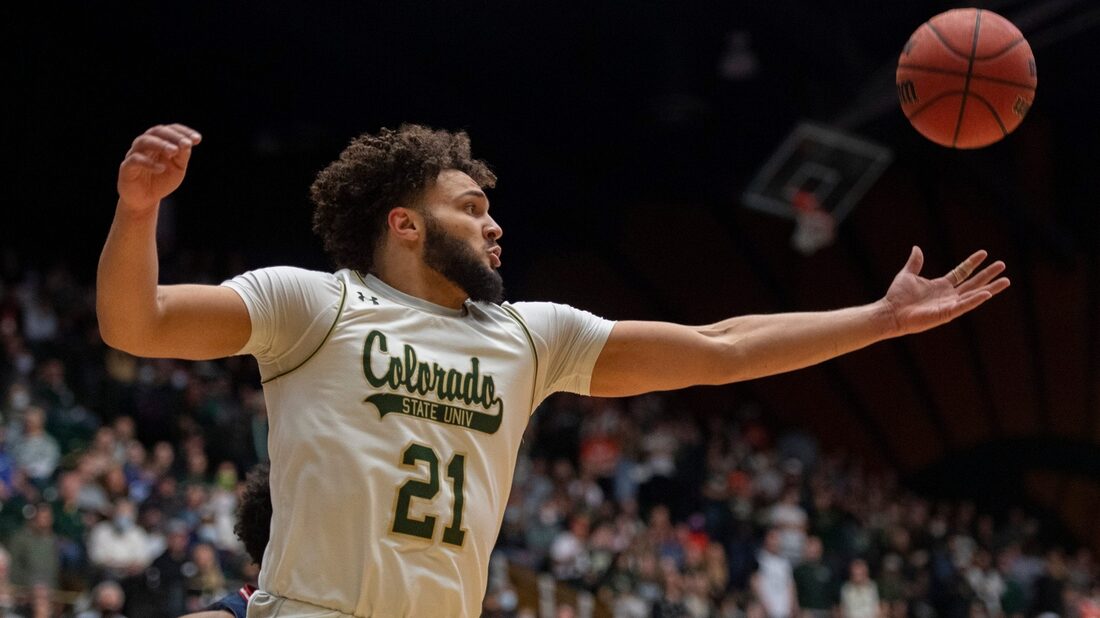 #23 Colorado State is the only Mountain West team in the national rankings and is viewed as a lock to make the NCAA Tournament.

Still, the Rams are just the #2 seed in the league’s postseason tournament behind Boise State. And the memory of what happened 12 months ago burns in veteran players’ memories.

Added together, Colorado State is intent on being the last remaining team standing this time around, and that task begins with Thursday’s quarterfinal against seventh-seeded Utah State in the Mountain West tournament at Las Vegas.

Though the Rams are currently pegged as a probable #7 seed in the NCAA Tournament, they know nothing is official until you see your school listed on the Selection Sunday bracket on television.

Colorado State lost to Utah State in last season’s tournament semifinals but still felt it was going to the NCAA Tournament for the first time since 2013. Instead, the Rams were passed over.

That shouldn’t be an issue this season with the Rams winning eight of their past nine games and the Mountain West forecasted to get either three or four teams in the Big Dance.

But you can’t fault the Rams (24-4) for being focused on claiming the league’s automatic berth to March Madness.

“We are where we are for a reason, and we have a good team,” Colorado State coach Niko Medved said. “There’s a lot of good teams in this league. That’s the thing, you can play really well and not win.

“You’ve just got to focus on playing well and playing at a high level. We have confidence that if we do that, we’re going to give ourselves a chance to win.”

Utah State played its initial game of the tournament on Wednesday, and it pounded 10th-seeded Air Force 83-56.

The Aggies (18-14) can only reach the NCAA Tournament with a Cinderella run through the conference tournament.

First-year coach Ryan Odom knows a little something about magical runs — he was the coach when UMBC became the first #16 seed to beat a #1 when the Retrievers routed Virginia 74-54 in 2018.

Utah State has won three of its past four games, but Odom also is aware beating the Rams will be hard.

“We know we’re facing a team that’s dynamite. Colorado State has had an awesome season.” Odom said after the win over Air Force. “We’re going to give it our best go.

“We had two pretty close games with them. … We know it’s going to be really difficult, but we’re excited that we’re going to have another opportunity.”

Brandon Horvath recorded 18 points and 12 rebounds in the win over Air Force and ranks second on the squad in scoring (13.8) and rebounding (6.6).

Fellow forward Justin Bean leads the way with averages of 17.8 points and 9.7 rebounds per game and stands two rebounds away from becoming the third player in Utah State history to reach 1,000 boards. He also is six shy of passing school Hall of Famer Greg Grant (1982-86) for second place.