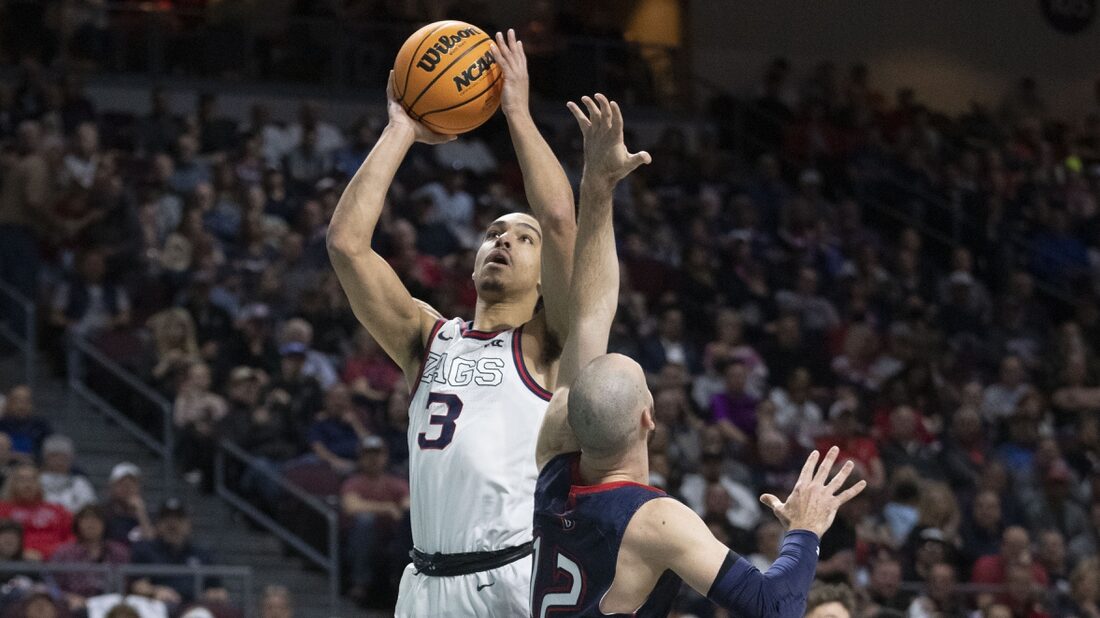 Andrew Nembhard recorded 19 points and seven assists as top-ranked Gonzaga notched an 82-69 victory over Saint Mary’s on Tuesday night in Las Vegas to win the West Coast Conference tournament title for the 19th time in the past 24 seasons.

The victory all but assures the Bulldogs (26-3) will be the #1 overall seed in the upcoming NCAA Tournament. Saint Mary’s (25-7) was being touted as a possible #6 seed prior to losing to Gonzaga for the second time in three meetings this season.

Logan Johnson scored 21 points for the Gaels, who played in the conference title game for the fifth time in seven seasons. Gonzaga outshot Saint Mary’s 57.7 percent to 47.4 percent from the field.

Bryant is headed to the Division I NCAA Tournament for the first time after beating Wagner 70-43 in the title game in Smithfield, R.I.

The Bulldogs (22-9) made the Division II tournament seven times, reaching the final in 2005, before beginning the transition to Division I in 2008.

Peter Kiss scored 34 points to lead Bryant to the win after a long second-half delay caused by a fight in the stands. Raekwon Rogers paced the Seahawks (21-6) with 12 points.

Bellarmine is ineligible for the NCAA Tournament during its transition period from Division II to Division I. Jacksonville, which defeated Jacksonville State in a semifinal game, would have earned the conference’s automatic bid with a win in the title game.

South Dakota State ran its winning streak to 21 games and sealed an NCAA Tournament bid with a 75-69 victory over North Dakota State in Sioux Falls, S.D.

Delaware rallied in the final 2 1/2 minutes to beat UNC Wilmington 59-55 in the final at Washington, giving the Blue Hens their first NCAA Tournament appearance in eight years.

Davis and Sims each led their teams with 18 points.

Trey Calvin’s 14-foot jumper with 10.5 seconds left put Wright State in front, and the Raiders pulled out a 72-71 victory over Northern Kentucky in the final at Indianapolis.

Calvin scored 21 points to lead Wright State, which is headed to the NCAA Tournament for the first time since 2018. Marques Warrick put up a game-high 28 points for Northern Kentucky.