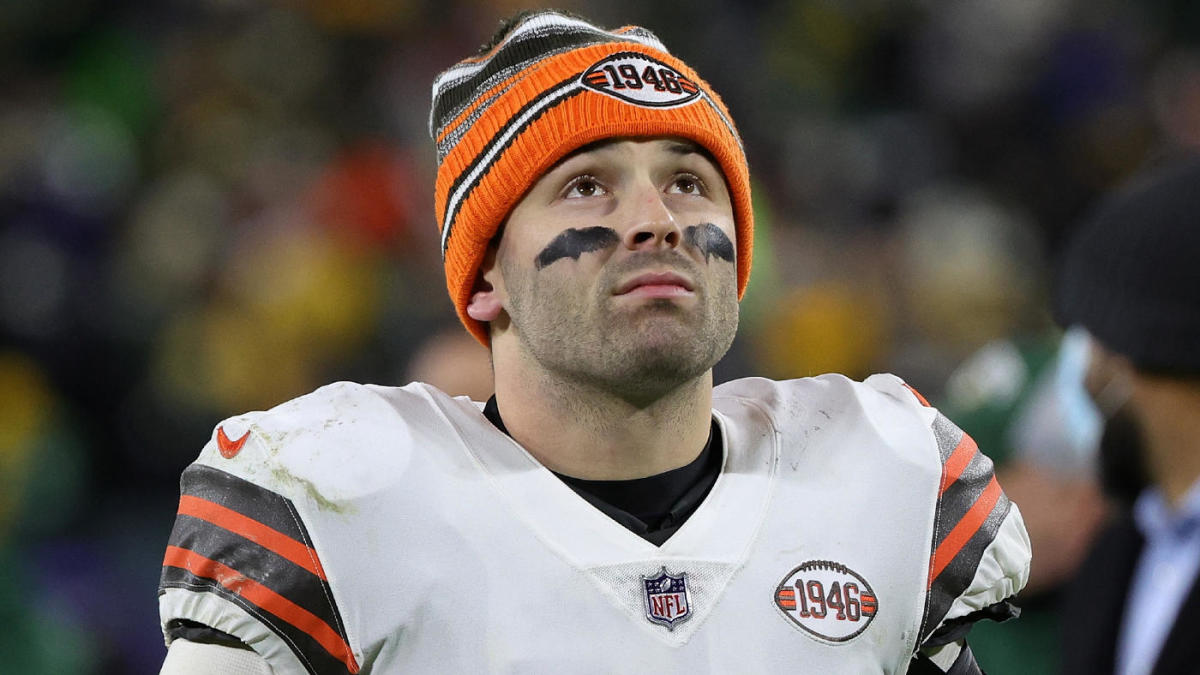 The first overall pick of the 2018 NFL Draft, Browns quarterback Baker Mayfield is in limbo: Cleveland has traded for his replacement, Deshaun Watson, and signed the 2020 passing yards leader to a market-altering, fully-guaranteed, five-year, $230 million contract extension despite Mayfield having his $18.9 million fully guaranteed, fifth-year option left on his contract in 2022. Cleveland also signed former Patriots, Colts and Dolphins quarterback Jacoby Brissett, seemingly in case Watson will have to miss significant time next season because of a suspension relating to 22 civil lawsuits alleging sexual assault or misconduct.

The chances Mayfield remains on the Browns by the time the 2022 season kicks off are slim. Among 25 quarterbacks drafted in the first round from 2011-18, only two have played for the team that drafted them on the fifth-year option without receiving an extension: 2015 first overall pick Jameis Winston, and 2015 second overall pick Marcus Mariota. Neither were on the teams that drafted them after their fifth season. Mayfield would be the third, and Baltimore Ravens quarterback and 2019 NFL MVP Lamar Jackson could, however unlikely it seems, be the fourth if he doesn&rsquor;t secure a long-term extension this offseason.

Just like the Browns, many other teams have recently made moves to secure talent at the quarterback position, including the Denver Broncos (Russell Wilson), Indianapolis Colts (Matt Ryan), Washington Commanders (Carson Wentz), Atlanta Falcons (Marcus Mariota and Desmond Ridder), and the Pittsburgh Steelers (Mitchell Trubisky and Kenny Pickett).

The Athletic&rsquor;s Jeff Howe reported reported on May 20 that the Carolina Panthers and Seattle Seahawks remain intrigued at the possibility of adding Mayfield to their quarterback competitions for the 2022 season. Howe reported that issue was the Browns so far being unwilling to absorb enough of Mayfield&rsquor;s fully guaranteed $18.858 million salary, and while the Panthers and Seahawks still haven&rsquor;t ruled out acquiring Mayfield, they&rsquor;ll need the Browns to take on a much greater portion of his contract than they&rsquor;ve offered so far.

Mayfield has exuded confidence in his ability to adjust to another new situation.

“I feel disrespected 100% because I was told one thing and they completely did another,” Mayfield said on the “You Never Know” podcast on April 13. “That&rsquor;s what I&rsquor;m in the middle of right now. And you know what? OK. I got my taste of it because I&rsquor;ve had four different head coaches in four years, a bunch of different coordinators. I&rsquor;ve had the highs, and they always come back.”

His faith in his ability to persevere isn&rsquor;t entirely unfounded. Mayfield is only the fourth QB since 1950 to play under three different full-time head coaches in his first three career NFL seasons (minimum 20 starts). He is the only one of those quarterbacks to win the majority of his starts in that constant state of transition, as he played under Hue Jackson in 2018, Freddie Kitchens in 2019 and Kevin Stefanski since 2020.

Despite those uniquely trying circumstances, Mayfield has been the Browns&rsquor; most prolific passer through the first four seasons of any player&rsquor;s career with the team, throwing for the most yards (14,125) and touchdowns (92) — Bernie Kosar (1985-88) ranks second in passing yards, and Pro Football Hall of Famer Otto Graham (1946-49) ranks second in passing TDs.

Mayfield&rsquor;s production took a step back in 2021 as he played through a torn labrum in his left, non-throwing shoulder and missed three games — while his supporting cast also got hit with injuries, including running back Nick Chubb (out 3 games), running back Kareem Hunt (9 games), wide receiver Jarvis Landry (5 games), left tackle Jedrick Wills (4 games) and right tackle Jack Conklin (10 games). Browns quarterbacks were under pressure on 26.9 percent of their drop-backs in 2020, the fifth-smallest rate in the NFL. That number increased to 30.5 percent in 2021, the ninth-smallest rate in the NFL. Since 2020, no quarterback&rsquor;s passer rating improved when they were under more pressure than their prior season. So between his injury, his teammates&rsquor; injuries and less time to throw, life under center was significantly more challenging for Mayfield last season.

“I have seen Baker play at a very high level.” Browns head coach Kevin Stefanski said at his end-of-season press conference in January. “I am confident he will get this [shoulder] surgery and he is going to work real hard this offseason to bounce back. He battled through this injury, like a lot of the guys do. I do not say that to minimize how he did that. He pushed through it. I know he wants to perform better. I have seen him perform better. He played winning football for us. I fully expect him to bounce back next year.”

Mayfield most looks like a top-10 quarterback when utilizing play-action, performing like one in 2020 when opposing defenses had to account for healthier versions of him, Chubb, Hunt, Landry and his offensive line. Running play-action passes allows quarterbacks to streamline their scanning of the field by giving them only two or three routes to choose from, and the threat of running the ball slows down the pass rush, which provides the quarterback more space in the pocket. Since one of Mayfield&rsquor;s bigger weaknesses is his stature (standing 6-foot-1 is on the shorter end for an NFL quarterback), his reliance on play-action makes a lot of sense. Here&rsquor;s a look at how he&rsquor;s fared in play-action since Stefanski took over as head coach in 2020.

Having less time to operate in 2021, Stefanski and the Browns reduced the usage of Mayfield&rsquor;s play-action game for quicker-developing screen passes. The number of screens nearly doubled to 66, the 16th-most in the NFL, after only calling 39 screen pass attempts in 2020, which was tied for the sixth-fewest in the NFL that season. Mayfield led the NFL with 8.8 yards per screen pass attempt in 2021, and his 7.3 yards per screen pass attempt was the third-most in 2020. Neither led to as many fireworks for Mayfield and the Browns as play-action, as he only threw one passing touchdown on a screen over the last two seasons, a 33-yarder to rookie running back Demetric Felton in Week 2 against the Houston Texans last season.

Clearly, the Browns have decided to move on and if they and either the Panthers or Seahawks can agree on a trade package, Mayfield can get a second chance to be a starter before hitting free agency next offseason.

“It&rsquor;s fluid, and we&rsquor;ll just continue to work through it as we go each day,” Stefanski said at the NFL owners&rsquor; meetings at the end of March. “I think everybody understands the situation. We&rsquor;re hoping that there&rsquor;s closure to it at some point.”

Here is what Mayfield would be walking into if he were to become a member of either of those two teams to compete for a new starting quarterback job.

“One of the things I&rsquor;ve been working on is being better talking to you people [media], so announcing the starting quarterback [Sam Darnold] here I just put my foot in my mouth,” said new Panthers offensive coordinator Ben McAdoo in his first Carolina press conference on April 19. “That wasn&rsquor;t something I should have said.”

Moore haas 1,100 or more receiving yards in each of the last three seasons since 2019, making him one of three players in the NFL to do so in that span along with Bills wide receiver Stefon Diggs and Chiefs tight end Travis Kelce.

Anderson has 14 receiving touchdowns of 30+ yards since entering the NFL in 2016, tied for the third-most in the NFL in that span with Antonio Brown.

“We&rsquor;re always competing,” Pete Carroll said on May 5 on Sports Radio 93.3 KJR FM. “I&rsquor;m not saying anything you didn&rsquor;t think I was going to say, but fortunately that&rsquor;s always been the way we&rsquor;ve operated, and it fits again. So we&rsquor;re looking. I don&rsquor;t see us making a trade for anybody at all. I don&rsquor;t see that happening. But we&rsquor;re certainly going to continue to be open to chances to help our club, and meanwhile we&rsquor;re just going to be battling and competing our tails off. There&rsquor;s always possibilities, so we keep open to that.”

Metcalf has 29 career receiving touchdowns since entering the NFL in 2019, tied for the fifth-most in the NFL in that span with Cooper Kupp.

Most receiving TDs since 2019

Tyler Lockett has 15 receiving TDs of 30+ yards since entering the NFL in 2015, tied for the fifth-most in the NFL in that span with Antonio Brown and DeSean Jackson.

Both teams have offensive lines that are in the process of being reworked and have similar strength of schedules in 2022 (The Seahawks have the 11th-hardest and Panthers have 12th-hardest schedules based on 2021 opponent win percentage).

When healthy, the Panthers Swiss Army running back is arguably the best stress-reliever a quarterback could ask for since he is able to grind teams up on the ground in addition to being available for quick, check-down passes that magically become first downs. His 2,467 receiving yards after the catch from 2017-2019 were the most in the NFL. While Rashaad Penny played like one of the best running backs in football over the final five games of last season, there&rsquor;s no evidence to suggest that his sprint to the 2021 season finish line is something he will repeat or come close to when examining his career in its entirety.

As far as the schedule component, the NFC West had three playoff teams: the Super Bowl Champion Los Angeles Rams, NFC runner-up San Francisco 49ers and Kyler Murray&rsquor;s Arizona Cardinals. Instead of having to play those three teams a combined six times, Mayfield would face the rebuilding Falcons twice and the Saints twice, whose quarterback Jameis Winston is coming off a torn ACL. Yes, Tom Brady&rsquor;s Buccaneers are just as scary as those NFC West foes. If Mayfield and the Browns get their wish of a trade coming through to take the former top overall pick out of Cleveland, Carolina would provide the landing spot for Baker to have the best chance for success in his second act.