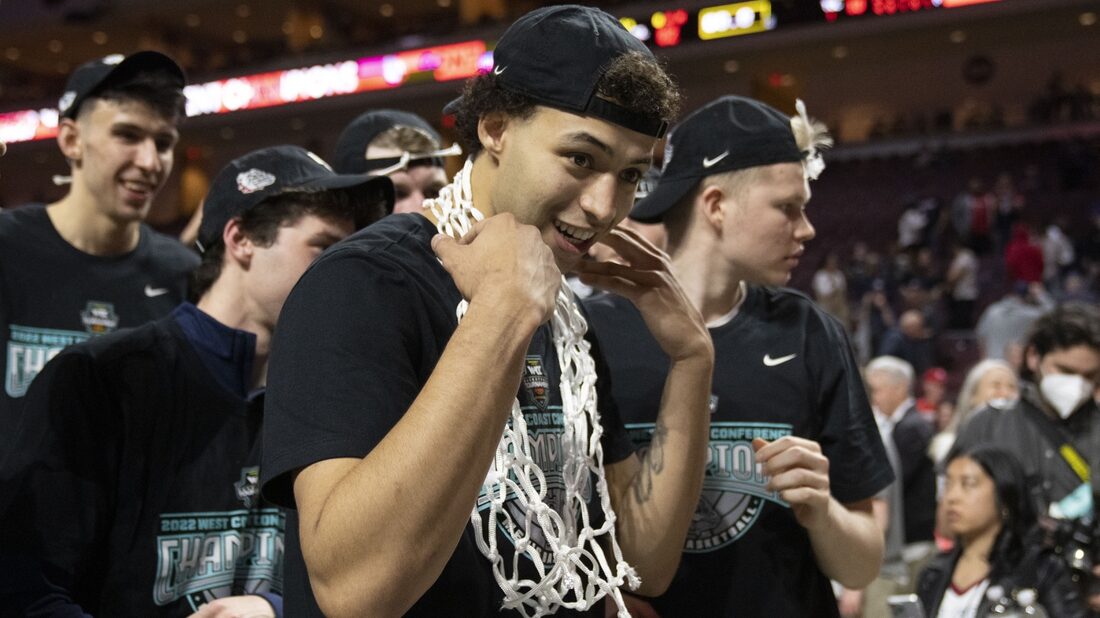 Can top overall seed Gonzaga finally win it all? That will be the big question after the Bulldogs suffered their only loss last season in the NCAA Tournament championship against Baylor. The pressure of becoming the first undefeated champion since Indiana in 1976 won’t weigh on the Bulldogs this year after regular-season losses to Duke, Alabama and Saint Mary’s. The Crimson Tide are the #6 seed in the West.

A Gonzaga rematch with Duke is possible in the West Region final. Paolo Banchero, a Seattle native recruited by the Zags, scored 21 points to lead Duke to an 84-81 victory against the Zags on Nov. 26 in Las Vegas in one of the most highly anticipated nonconference games of the season.

There was no surprise Gonzaga (26-3) got the top seed after beating Saint Mary’s in the West Coast Conference tournament championship. Gonzaga big men Chet Holmgren and Drew Timme are both finalists for the John Wooden Award as the nation’s best player. The Bulldogs led Division I in scoring (87.8 points per game), field-goal percentage (52.7), defensive rebounds (32.1 per game) and scoring margin (22.5 points). They were also third nationally in field-goal percentage defense (37.9).

Duke dropped to a #2 seed with a loss to Virginia Tech in the Atlantic Coast Conference tournament championship. They won their first ACC regular-season title since 2010 for coach Mike Krzyzewski, who is in his final season. Coach K needs two more wins to reach 1,200 for his career. The Blue Devils have a balanced attack, with five players averaging double-figures.

8 Boise State vs. 9 Memphis. Broncos coach Leon Rice is a former Gonzaga assistant, which could lead to an intriguing second-round storyline, but they’ll have to overcome an 0-7 NCAA mark. The Tigers won 12 of 13 before a loss to Houston in the American Athletic Conference title game.

5 UConn vs. 12 New Mexico State. The Huskies won seven of their final nine games, including an upset of Villanova, to receive an at-large berth out of the Big East. The Aggies, who feature four players who are 1,000-point scorers in their careers, finished in a three-way tie atop the Western Athletic Conference before claiming the tourney title.

7 Michigan State vs. 10 Davidson. The Spartans struggled down the stretch before reaching the Big Ten semifinals. The Wildcats’ Foster Loyer, a transfer from Michigan State, leads the team with 16.4 points per game and the nation in free-throw percentage (93.4).

Gonzaga’s Chet Holmgren. The 7-foot freshman, who has been called a “unicorn” because of his unique skill set, is considered the likely #1 pick in this year’s NBA draft. He averages 14.2 points and 9.6 rebounds and is an elite rim protector.

Duke’s Paolo Banchero. The freshman forward, who was third in the ACC’s Player of the Year balloting, leads the Blue Devils with 17.0 points and 7.8 rebounds per game.

UConn’s R.J. Cole. The former Mid-Eastern Conference Player of the Year at Howard leads the Huskies with 15.7 points and 4.1 assists per game.

Sixth-seeded Alabama will be favored against the winner of the First Four matchup between Rutgers and Notre Dame, but keep an eye on the line. The Crimson Tide have had an up-and-down season, with wins against Gonzaga, Tennessee and Houston. But they were also the lone Southeastern Conference team to lose to Georgia and blew a 15-point lead in falling to Vanderbilt in the second round of the SEC tourney.

OUT OF THE WEST

Gonzaga is listed at +350 to win the tournament, the shortest odds on the board. If the Zags had Holmgren in the middle last season, they would have had a much better chance against Baylor.

Don’t discount the possibility Duke wins one last title for Coach K and Texas Tech, even with coach Chris Beard moving on, has Final Four pedigree — and the nation’s #1 defense.